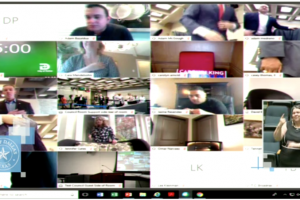 Disregarding calls to postpone a vote on its controversial Climate Plan until the Dallas City Council can resume traditional public participation in meetings, Council Environmental Chair Omar Narvaez has set a May 27th date for full council approval.

According to an April 9th memo Narvaez sent to the rest of the Council, the newest draft of the plan will be unveiled online on April 21st with a full briefing to the Environmental And Sustainability Committee scheduled on May 4th if that’s possible. If not, the full council will get a briefing on either May 6th or 20th.

While current local Shelter-in-Place orders expire at the end of April, most experts believe those should be extended through May and there’s no timeline for reinstating in-person public meetings of any local city councils or other governing bodies. If the City follows Narvaez’ schedule, it’s uncertain under what circumstances the Dallas Plan would be adopted, and how much public participation would be allowed.

That Dallas’ plan might be approved while by-passing the usual democratic niceties is just one more way it’s managed to elude real public engagement and transparency over the past two years. From beginning to end, the project has been a consultant and staff-led exercise with just enough of a thin veneer of “public participation” to reassure the unaware.

In the memo, Narvaez goes to great lengths to recap City Hall’s efforts at including “the public”  in the plan. He cites the plan’s Stakeholder process, where staff hand-picked its own City Hall-friendly review committee. Not cited is the strange fact that there’s never been a list of individual stakeholder participants released and anyone wanting to know who was representing “the public” in the process had to submit an Texas Open Records Act request to City Hall to find out. Navarez also recounts the previous briefings his Committee has received from staff – but not the fact that no public participation was allowed in those briefings.

Neither does Narvaez mention that some of the Plan’s own official stakeholders are in open rebellion over its uninspiring results, including allies who were practically embedded with city staff for months. There are at least two separate on-going efforts by former stakeholders to try and strengthen the Plan before passage.

But the same divisions that have plagued Dallas environmental groups since the Plan’s announcement are dividing it at the end of the process as well. Representatives of larger mainstream groups like the Sierra Club and Public Citizen are pushing for quick adoption of the Plan, while Texas Campaign for the Environment, the local fledgling Sunrise Movement chapter, and others are seeking delay until citizens are allowed to come back into the Council Chambers and speak directly to their representatives – without the help of Zoom.

One recent development of the Plan that could be actually be relevant for ordinary residents is talk about restoring the Environmental Health Commission as a way to monitor the Climate Plan’s progress as well as serve as a new forum for residents’ concerns. Eliminated ten years ago just as secret gas drilling deals were being written by then City Manager Mary Suhm, the Commission had previously acted as the Council’s eyes and ears on all things related to public health and successfully advanced policy on a variety of fronts, including practical elimination of all waste incineration in Dallas.

Downwinder allies in The Southern Sector Rising Campaign for Environmental Justice called for restoration of the Environmental Health Commission last year at its March 20th news conference at City Hall and has been lobbying to bring it back ever since. Responding to a 2019 Dallas Green Alliance questionnaire, 10 of 15 current Council Members approved of the idea, so theoretically at least, it might be an easy sell.

If restoration of the Commission as previously fully empowered were to actually be included in a final Climate Plan package, at least something of practical real word use would have been purchased with the $500,000 + spent to date on the effort.

Our past coverage of the plan:

March 2020: “Biggest Disappointment of the Dallas Climate Plan? Greens Giving Away Their Power For So Little in Return.“