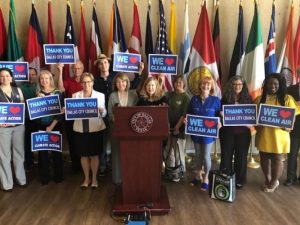 Who could have possibly foreseen? Many of the activists in this 2018 picture who lead the effort to secure half a million dollars for consultants to write a climate plan are now unhappy with the climate plan the consultants wrote. Photo by Linda Hamilton

There’s a lot of angst and disappointment among Dallas green groups over the draft of the consultant-driven Dallas Climate Plan released a couple of weeks ago and headed to a final vote in April.

Despite Mayor Mike Rawlings vowing to “adopt, honor, and uphold the commitments to the goals enshrined in the Paris Agreement” in 2017, the actual 2020 plan achieves less than 50% of the emission reduction goals by the deadlines set in that international agreement.

Since its unveiling, local green discontent with the Plan has been bubbling up in a variety of ways. There’s an appeal to join a protest rally at this Tuesday’s official roll-out of the Plan at the City’s day long “climate symposium” to show support for a “stronger,” and “better” plan. Another group’s online plea states that “many” of the Plan’s 93 action items are “inadequate” and not immediate enough. There are lists of demands that include the commitment to actually fund the recommendations proposed, accelerate vehicle and fleet electrification by a decade or more, and “more quantifiable actions” to insure the city meets its own goals.

What makes these criticisms both sad and instructive is that they’re coming from some of the same green groups that literally went door-to-door in 2018 trying to effusively sell Dallas residents on the idea of the consultant-driven climate plan they’re now faulting. Having campaigned and won City Council approval to spend $500,000 of the $750,0000 in earmarked “environmental funding” leftover from the city’s short-lived plastic bag fee, they were rewarded for that sales job by having their representatives appointed official “stakeholders” in the plan’s drafting.

That’s apparently all they got from the City for their effort. Because those representatives are now stoking the newfound discontent with the plan they presumably helped draft.

Was it naive of these groups to put their trust in the same City Hall that approved illegal gas drilling, Joppa batch plants, and Shingle Mountain? Undoubtedly. The largest disappointment with the Dallas Climate Plan isn’t the action items it does or doesn’t include, but the blank check of support it got from those who had the leverage to ask for more at the beginning of things. At exactly the time when they had the most real power to produce a more creative, effective Plan, they said no thanks and gave all the power to City staff and the consultants whose pay they had secured. That’s the original sin from which all other shortcomings flow.

Confronted with the City’s intent to create its own climate plan after Rawlings made that very public promise in 2017, a more successful effort might have tried to assemble some kind of Dallas Green Alliance-type response from the widest possible spectrum of groups, many of whom are experts in their respective interest areas – Urban Ag, Water, Solid Waste, Transportation, Environmental Justice, and Air Quality.

Despite the diverse interests, maybe it would have been possible to wrangle a grassroots residents’ plan that identified 1 to 3 make-or-break reforms or procedures out of a longer list of recommendations. At that point, with most green local groups on the same page about what they wanted from the plan, this coalition could have said to City Hall  “If you want our support for that half million in consultants fees you have to promise X, Y, and Z be included in the adopting resolution.”

There are no guarantees such a path would have produced a better plan, but the tragedy is that it was never even tried.

All the original cheerleaders seemingly just wanted to cut a deal for a climate plan in name. For the most part, that’s exactly what they got. The only ones who seem surprised by its lack of serious content are the ones who signed-off on that superficiality.

Instead of building on reforms already negotiated up front, critics are now left to complain from the sidelines at the last minute, only weeks before the final vote. That’s rarely a recipe for successful change.

After Tuesday’s rollout, it looks like the full council might be briefed by staff on the Plan Wednesday, April 15th, with a symbolically-laden vote on the 50th anniversary of Earth Day, Wednesday April 22nd. Amendments are possible but need eight votes to pass a city council that has yet to be tested for its green bone fides.

Other “interest groups”  have accumulated, organized, and leveraged their power to insure they weren’t cut out of the action at City Hall – the amazing LGBTQ Stonewall groups who are a force of nature in local politics, black and brown business associations, church and civil rights groups, and of course developers and the Citizens Council.

Some future Earth Day you’ll know the DFW green movement will have grown into a mature political force when it has the self-interest, wherewithal, and ambition to negotiate from a position of collective power. For now, among the costs we incur by the absence of that strategy are disappointing, timid climate plans.

Want to learn more about the Dallas Climate Plan process? Read our coverage: