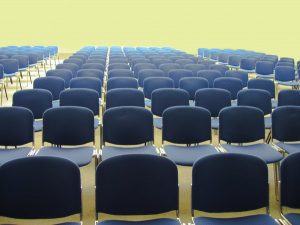 All in all, Dallas City Hall had everything it thought it needed for its very first of six climate plan public engagement meetings…save the public itself.

Of the 23 people in attendance on April 29th at the Beckley Saner Rec Center, only three were members of “the public.” Staff and consultants outnumbered them a good five to six to one with the rest being members of the City Climate Plan’s handpicked “Stakeholders Group.”

And even that group was not a safe bet. One Stakeholder came armed with a flier complaining that the City had made “no promise your voice or ideas will actually be heard” while another wondered why there were being asked to attend. That was a easy question. To help fill seats. 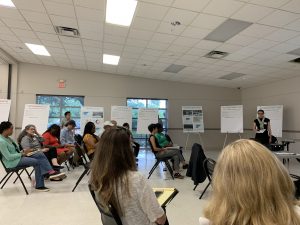 Looks can be deceiving. There were only two members of the public at the first climate plan public meeting. Everyone else in this picture is staff or Stakeholders.

It wasn’t a very auspicious beginning to the public interface phase of the city’s climate plan process. It’ll be interesting to see how much the city gets billed by the professional PR experts to generate less than a Poker game’s worth of participants.

That result prompted a memo which produced wave upon wave of new social media reminders about the great opportunity to attend the next five meetings from everyone at City Hall including, council members, Dallas Mayor Mike Rawlings to DART board members. That push was successful in tripling the size of the April 30th and May 2nd meetings to nine members of the public. But there hasn’t been a meeting yet where the public made-up a majority of those in attendance.

Maybe word got out about the, er, circumscribed nature of the “engagement” meetings. You arrive to find the categories for responses have already been defined by staff on big white boards surrounding the room. There’s “Buildings and Energy,” “Food and Urban Agriculture,” “Parks and Open Spaces,” “Solid Waste,” “The Water We Use,” and “Transportation.”

These follow the format of the online survey the City is pimping.

Under each of these broad subject titles are exactly six prompted policy options already proposed by staff. Not five, or seven, always six. And they’re far from comprehensive. For example, despite the worldwide wave of electric bus fleet electrification (Paris just ordered 800 e-buses), that policy option is nowhere to be found on the Transportation Board. If you’re aware of that trend you can record a write-in vote for it but it’s not presented to the general public as an obvious climate change policy, which it most certainly is.

Otherwise, your job is to place purple dots by the policy options already outlined for you by City Hall staff.

This is after you get a 30-minute Dallas staff PowerPoint primer on climate change that tells most people showing up for this meeting what they already know. There’s never any opportunity for a back and forth discussion among participants or true brainstorming as a group about local remedies. You watch the PowerPoint, pick among the already chosen policy options on the big boards, or write your own suggestions in, and then….go home. This is the staff’s definition of “public engagement.”

Setting the tone-deaf basis for these public engagement meetings was the much ballyhooed “Town Hall” at this year’s Fair Park’s EarthX event, which was really just one looooong lecture. There you could immerse yourself in 45 minutes of staff talking at you about how great staff and Dallas had been doing so far. Want to ask questions about the process? No time. It was less a “town hall” than a “city closet.”

A good fifth or fourth of the Town Hall audience were Stakeholders already chosen by the city staff to participate in a sort of overview of what’s going on. These are the same Chosen Few who were asked to please show up at the public engagement meetings. There is no public listing of who’s in the group – it’s not there on the City’s website or anywhere else, but it looks to include all the usual suspects we predicted it would plus a few others. There’s also not a meeting schedule for the group or an indication whether the public is allowed to attend.

In fact, the City’s climate plan website is kind of a hot mess, full of 404 error messages and empty white space where details of the process should be housed. A question on the site’s “forum” asking about Stakeholder membership has gone unanswered for 6 days now. It’s “blog” is empty of posts. Like the process itself, it seems mostly for show and to serve as a funnel to take the city’s survey. 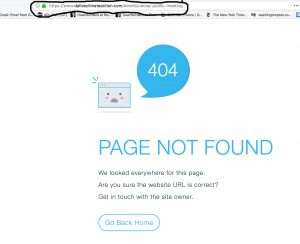 Official Stakeholders are sometimes asked to identify themselves in the meetings, but never actually introduce themselves to the public.  They’re supposed to be a combination of business, government, and environmental group representatives but since there’s no listing of them, it’s hard to tell how representative they really are. During their first group meeting, the guy from the Trump EPA reportedly looked around the room and commented how “white the group was.” Not a good sign.

Nor do they seem to have much opportunity for real input. Stakeholders complained at the April 29th meeting that either that they hadn’t been asked to provide suggestions for the City’s survey and meeting format or the ones they’d offered were ignored.

So far, they’ve mostly served the purpose of filling out the very thin public presence at each of the City’s official climate plan events and being a PR backstop for staff to proclaim how inclusive they’re being.

We hate to say we told you so, but we really did.

There are three more city “public engagement” meetings scheduled if you want to assess the process for yourself: