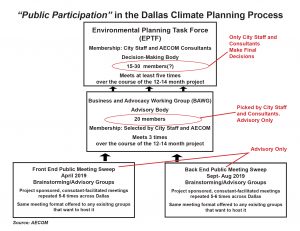 Despite supporters’ claims that the new $500,000 Dallas Climate “Action” Plan would have lots of opportunities for public participation, the decision-making apparatus drafting the plan puts all the decision-making power in the hands of City staff and its hired consultants.

Meet the New Boss. Same as the Old Boss.

Oh, they’ll be countless PowerPoint presentations and “brain storming” sessions around the city over the next year in meetings sponsored by City Hall and neighborhood associations, but those will have exactly zero official standing in the final plan. Suggestions and comments will be harvested but they don’t have to be included – not even if they’re extremely popular in all those meetings.

Those community meetings are the foundation for the process AECOM consultants outlined at the City’s Climate Symposium on February 4th. They’re at the very bottom of the plan’s purported decision-making pyramid. This MO is familiar to anyone dealing with Dallas City Hall in the recent past: “We’re happy to give you all the well-publicized public meetings you want. Just don’t ask us to let the public in the room when the actual decisions are being made.” 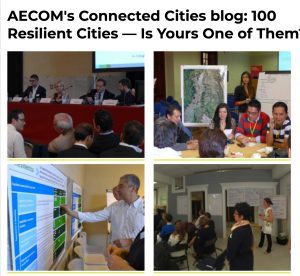 To maintain the illusion of someone other than city staff and consultants being involved, there’s a 20 member “Business and Advocacy Working Group, or “BAWG” (pronounced like the noun describing the soft ground formed by decaying plants, but also like the British slang term for a toilet, as in “Do you have any Bog/BAWG paper? We ran out.” Either metaphor is probably apt here.)

This august body will be, let’s see, what was the very civilized term used by the AECOM consultant at the Symposium? “Curated,” that’s it. The BAWG members will be “curated” by city staff and AECOM. We thought that was such a precious term for “hand-picked by the Powers-That-Be.”

So City Hall and AECOM will hand pick the 20 members of this working group, at least half of whom will be Dallas “Bidness” folk. That leaves 10 or less slots for “advocates” like the Texas Tree Foundation, the Texas Nature Conservancy, and other City Hall friendly-groups who are allies or have the blessing of  Dallas (Rockefeller) “Resilency” Czarina Theresa O’Donnell. Of course O’Donnell proved her green bone fides earlier this decade when she passionately defended the idea of drilling for gas in Dallas public parks.

Despite other cities singling-out “equity” concerns for their own tracks, there’s absolutely official zero intent in the Dallas Office of Environmental Quality and (Rockefeller) Sustainability to do so here. Not even after going around the last six months proclaiming how concerned City Hall was about black kids with asthma. Local environmental justice advocates approached the OEQ(R)S last month with the idea of  establishing an “equity working group” as part of the public participation process. They were told the City wasn’t interested.

Remaining remarkably consistent with their current management philosophy city staff dismissed the idea that more Dallas residents being involved in the planning process was a good thing. When the EJ groups brought up the recently-completed San Antonio plan which established not only a business-environmentalist steering committee but working groups on “Energy and Buildings,” “Transportation and Land Use,” “Solid Waste Resources, ” Water and Natural Resources,” and “Equity,” staff responded that San Antonio City Hall had warned them to avoid all that democracy. “There were too many people involved down there” was the reply, which will surely come as a surprise to the 86 San Antonio activists who participated.

Despite all this official gate-keeping surrounding the Climate Plan’s BAWG/BOG membership in Dallas, the actual on-the-paper influence of this curated working group is questionable since it only meets 3 times over the course of the year long drafting process. For most of those 12 months this “working group” is unemployed.

Which brings us to the real decision-makers at the top of the pyramid, the “Environmental Planning Task Force, or “EPTF.” Gesundheit!

Comprised exclusively of city staffers and consultants, this Task Force will oversee the day-to-day machinations of the climate plan, and most importantly what recommendations to include, or not, and what timelines are “realistic” vs “not practical.” While there’s a patina of public participation in its “listening tours” the final arbiters of Dallas’ climate plan remain completely removed from public transparency, accountability and meaningful participation.

It didn’t have to be this way, at least not without a fight. 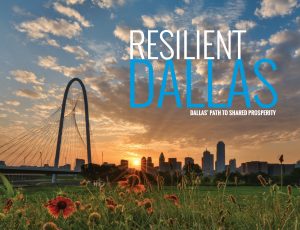 The same mainstream green groups that signed-off on City Hall using Dallas’ moribund plastic bag fund to pay for this plan could have demanded authentic public participation in return for their support. They could have asked for Southern Sector groups to have their fair share of representation at the table. They could have requested multiple resident-staffed working groups like San Antonio. They could have asked for real oversight and decision-making.  Dallas City Hall needed them and their lobbying last August during the budget town hall meetings, but they gave up their leverage without asking for anything in return (that we know about anyway).  This current public participation plan that really isn’t, is the result.

As we noted in our last post about this subject, perhaps the only good thing about this process is that’s it gives Dallas residents a chance to upset the cart with their own ideas about how a climate plan for the city should be assembled. There’s already rumblings about a citizens’ planning process to shadow the staff’s version and provide an honest measuring stick for it. That would be a good idea. Unlike city staff, Downwinders believes the more people in the room, the better the decisions being made.