Downwinders at Risk has been the leading advocate of clean air in North Texas since 1994. Founded to defeat the burning of hazardous waste in the Midlothian cement plants, we won that fight and grew to become a regional force.

Since 2017, we've also been committed to an Environmental Justice agenda that seeks to reduce Particulate Matter pollution in DFW as much as possible.

Unaffiliated with any state or national organization, all of our board members are from North Texas. Most are People of Color. Many are veterans of their own grassroots struggles. Since our work is focused exclusively on the DFW metropolitan area we’re almost entirely dependent on local support.

We field the only full-time staff in DFW devoted to both cleaner air and grassroots community organizing. We provide training and expertise to citizens who want to win their clean air battles.

Our board meets once a month. Our PM Education and Training Committee hosts free training on our fleet of portable air monitors. Every spring we sponsor a semester-long community organizing class that teaches participants to "think like an organizer." 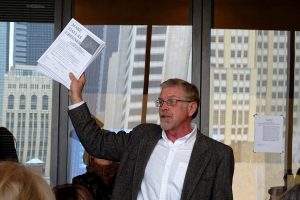 Jim Schermbeck.  Born and raised in Fort Worth, Jim obtained his undergraduate degree from Austin College and did post-graduate work at the University of North Texas and University of Texas at Arlington. From 1977 to 1988 he worked to stop the Comanche Peak nuclear power plant as a volunteer and professional organizer. He was Program Director of the Dallas office of the National Toxics Campaign from 1989 to 1994, where he assisted DFW residents in identifying two Superfund Sites, including the former RSR lead smelter in West Dallas. He's been with Downwinders at Risk since 1994. He's held the title of Director of Downwinders at Risk since 2007.