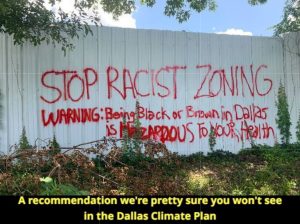 A staff presentation focusing on Dallas environmental equity lacks any metrics for comparing residential pollution burdens, or even for measuring the success of its own outreach effort.

So how does City Hall know what environmental “equity” looks like?

According to management guru Peter Drucker, “If you can’t measure it, you can’t improve it.”

Then what does it mean that a full year into a Dallas climate planning process heavily touted as reflecting the city’s emphasis on “equity” there’s still no map showing how pollution burdens are distributed across Big D? And what does it tell you when a presentation meant to advertise the inclusiveness of the City’s outreach effort for its climate plan doesn’t document participation by residents of color?

It tells you that despite all the rhetoric on the subject, Dallas City Hall isn’t serious about environmental justice yet. 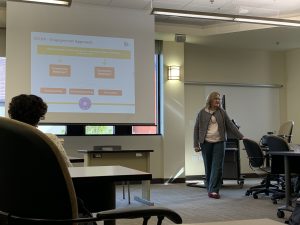 Exhibit A: “Dallas’ Climate Action Through an Equity Lens.”

This was a presentation that Susan Alvarez, Assistant Director of the City of Dallas Office of Environmental Quality & Sustainability, gave as part of Eastfield College’s Sustainability as a Social Justice Practice: Developing Resilient Strategies held last Friday, November 8th.

Context is everything and so it’s important to note that the entire thrust of both the Conference and the City’s specific presentation was aimed squarely at how to respond to current environmental challenges in an equitable and just way.  Here was a chance for Dallas OEQS city staff to display their embrace of equity as it relates to the climate plan it’s been paying a half-million dollars to consultants to construct. It was their very own EJ report card.

Equity and the Climate Plan:

And sure enough, there was no turning away from Dallas’ racist history in Alvarez’ presentation. Maps showing the City’s chronic segregation and poverty were included, as well as allusions to the Trinity River as the city’s dividing line between Haves and Have-Nots. Alvarez spoke about the current “Redlining Dallas” exhibit at City Hall that traces the City’s history of racism across 50 feet of photographs and stories.

In fact, just about every impact of the City’s official segregation was referenced, except for the one you’d expect.

There was not a single slide or sentence expended on the disproportional environmental impacts of 100 years or more of Dallas racism. No maps of where heavy industry zoning is allowed in the City. No maps of where most of the City’s largest polluters are located. No maps of what zip codes or Council Districts have the highest pollution per capita numbers. No references to past environmental justice struggles with the City like the West Dallas RSR fight, or gas drilling.

Watching the presentation you’d get the impression that racism infected every aspect of life for Dallas residents of color except for their exposure to pollution. But of course, we know that’s not true.

During this and other presentations on the climate plan-in-progress, staff go out of their way to point out that industry makes up “only 8% of emissions.” But if you’re interested in applying “equity” to this number the next slide should show the audience where that industry is distributed in Dallas – a map showing you where industrial polluters are allowed to set-up shop.  A slide to show you the amounts of permitted pollution by Zip Code, or maybe actual 2017-18 emissions by Council District. But there is no next slide.

If there were, it would show that most of that industry is located in predominantly Black and Brown neighborhoods. Racist zoning is at the heart of not just banking, education, and employment inequities in Dallas. It also means the dirtiest industries have always been located in close proximity to people who were institutionally considered Second-Class citizens. 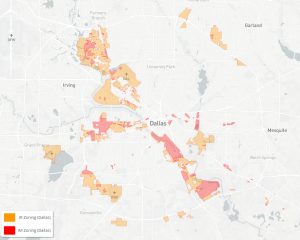 Disproportional exposure to industrial pollution by residents of color is not just AN equity issue. It’s THE single most important equity issue when you’re speaking about environmental justice in Dallas. The City’s Black and Brown residents are more likely to be exposed to harmful pollution than their white peers because the City’s own zoning designed it that way – but you’d never know it watching this presentation, on equity, at the social justice conference.

The “Redlining Dallas” exhibit that Alvarez cited thinks so. Along with other insidious effects of racism, it gives space to the RSR clean-up fight Luis Sepulveda and his West Dallas Coalition for Environmental Justice waged in the early 1990’s.  But there was no mention of that fight or any other Dallas examples during the presentation on equity, at the social justice conference. 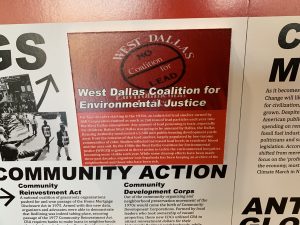 Staff referenced every other kind of red-lining on display at the City Hall exhibit – except the one most relevant to the topic.

Nor was there any mention of how much industry was located in the Trinity River floodplain, doing business in Black and Brown neighborhoods founded because the City wouldn’t allow these so-called “undesirables” to live anywhere else but side by side with “undesirable” industries. Alvarez made the point in the presentation that climate change means more flooding in general and more severe flooding. The next slide should show who and what is affected by that new flooding risk. A slide showing what percentage of heavy industry is located in the flood plain. A slide showing what the racial make-up and income levels are of those who’ll be more affected by increased flooding…and contamination. But there was no next slide, in the presentation on equity, at the social justice conference.

If you don’t have accurate maps of the inequities plaguing the status quo, how do you know when or if you’re ever getting rid of them? How do you judge success without a baseline?

Alvarez lowered expectations for the presentation by saying it would only look at the question of equity in how it was applied to the City’s climate plan “community engagement.” No actual equity policy options from other plans were on the table, just how well the plan’s public relations campaign did.

Not very well, she admitted. In fact the initial meetings and publicity were so anemic that she said the professional PR folks at Earth X had a come-to-Jesus-meeting with staff about a reboot. So that’s tens of thousands of dollars wasted on PR consultants only to be usurped by better free advice from locals. 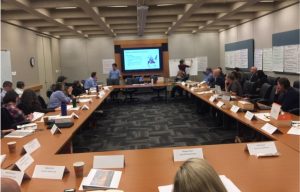 A meeting of the Dallas climate plan advisory group.

In her recounting of the climate plan’s PR rollout and planning process Alvarez gave an overview of the mechanics. “X” number of  meetings attracted “X” numbers of people. The City’s survey got “X” number of responses. An “X” number of people serve on an advisory stakeholders group.

Considering the very specific circumstances of the presentation, the next slide should have been how the results of those attending meetings, or completing a surveys, or advisory committee memberships reflect Dallas’ population as a whole. How do we stack up to who we’re representing? According to the Statistical Atlas Dallas is approximately 25% Black, 41% Hispanic , 30% White and 3% Asian. So the next slide should compare what percentage of those attending climate plan meetings, or completing surveys, or becoming advisory committee members were Dallas residents of color vs the city demographics.

But there was no next slide about how inclusive the City’s climate plan community outreach or advisory process has been in the presentation on equity, at the social justice conference.

In response to a question about the lack of such information Alvarez said it was irrelevant to the topic at hand. “I don’t think it’s important to say I’ve got four black people in my stakeholders group.”

Since the advisory group membership is only listed online by organizational affiliation it’s impossible for anyone outside the meetings to know what the ethnic or gender make-up of it is. There are 39 separate entities listed. 25% of that number would be nine to ten black people.

In elaborating, Alvarez challenged the idea that mapping Dallas’ racial or ethnic disparities in pollution 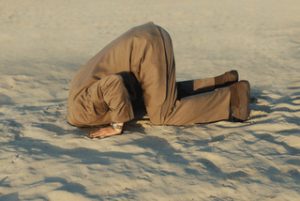 burdens was necessary to understanding “Dallas’ Climate Action Through an Equity Lens.”  She more or less stated it didn’t matter. (the presentation was recorded by Eastfield College and Downwinders has asked for access to it in order to quote Alvarez accurately).

And nothing makes a better case for the need to pass environmental justice reforms the Southern Sector Rising Campaign is advocating at Dallas City Hall, including an environmental justice provision in Dallas’ economic development policy, restoration of the Environmental Health Commission, and creation of a Joppa Environmental Preservation District. If residents want environmental equity considered in city policy they’re going to have to enlist their City Council members, do it themselves, and enact reforms like these.

The same is true as City Hall ramps up to take on citywide land-use planning in its “forwardDallas!” process early next year. When staff recently released the City’s “equity indicators” report, there was an indicator for everything but the environment. It only reinforced the idea that the environment, and environmental justice, are still after-thoughts in Dallas city government. Residents will have to arm themselves with the information the City staff can’t or won’t provide. They should start with the recent Legal Aid report “In Plain Sight” that demonstrates deep neglect for code and zoning regulations in Southern Dallas.

Grist recently published an article about the Providence Rhode Island climate planning process that looks to be the exact opposite of the model Dallas has adopted. But that city benefited from having an environmental justice infrastructure already in place when the climate crisis assignment arrived. Where’s the home for Environmental Justice in Dallas City Hall? Right now, it’s with staff that doesn’t think metrics about equity are important, in its presentation on equity, at the social justice conference.