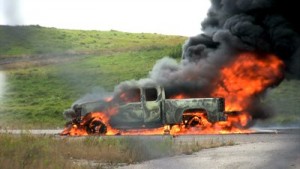 A funny thing happened to Dallas Morning News automobile columnist Terry Box while he was out test driving a new Dodge pick-up truck – it self-immolated and burned to ashes on the side of the road. As he writes about it, his experience is both funny and terrifying. But something he noted in how cars and trucks are made these days caught our eye:

"Open the hood of your late-model car or truck, and you’ll see a half-acre of plastic — actual engine pieces like valve covers, caps and containers for various liquids.

Thirty years ago, most of the pieces under the hood were metal and resistant to fire.

A fire in a modern vehicle burns fast and furiously. What’s intact for the moment can be gone or enveloped in toxic smoke in a matter of seconds."

Yep. When we've described the lovely new cement additive called ASR – Auto Shredder Residue – we've often talked about all the vinyl seats, dashboard and switches that get stipped out of a car and shredded, then thrown into a cement kiln. We really haven't talked about all the plastic in the engine compartment that would also be included in this new "fuel" that  TXI has already been permitted to burn at its Midlothian cement plant.

As more and more of every car is made of "soft materials" – that is, not metal – more and more of it becomes fodder for cement kilns. This is material that could be recycled but isn't, and as long as it's cheaper just to burn it, there won't be amrket for recycling it.

Here's the thing, burning plastic creates bad kinds of pollution, including the creation of Dioxin, one of the most potent posions ever discovered by science.  The same "toxic smoke" Terry Box saw pouring off of his burning Ram pick-up is created when you throw the same plastic parts into a cement kiln. The cement industry would like you to think that all of that is taken care of by the polluton control measures installed at the kilns, but it's not. There's no real time Dioxin montoring, much less any kind of monitoring for the host of other exotic fumes coming off burning plastic of various kinds. They barely even know what or how to test for such pollutants, but that doesn't keep the cement industry from marketing its kilns as "Long, Hot, and Good for America"™

If you're an old-timer, you might remember an earlier episode or two that occurred when the cement industry, including TXI, assured everyone that it could burn hazardous waste and make it completely disappear into water vapor. Remind us, how did that turn out?