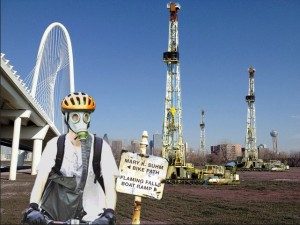 When you take on polluters, you take on the government that lets them pollute. The two are intertwined.

On Thursday, Dallas City Manager Mary Suhm announced that she was resigning. Just about every news account of her announcement connected it to a series of missteps over the last several years, most prominently, the February disclosure by the Dallas Observer that she had signed a previously unknown agreement with Trinity East promising to work with the company to overturn current policy and help secure permits to drill for gas in city parks.

Although superficially dealt with by an official airing in front of the Council where most members forfeited their roles as keepers of the public trust, the issue kept floating to the top of any discussion about not only the Trinity East permits, but the general issue of gas drilling in Dallas. Every City Council race questionnaire this election cycle had queries about not only the specific permits, but also about the performance of the City Manager in wrestling with the scandal. This wasn't going away.

Suhm had what she believed was a plausible public explanation for how she made an honest mistake in misleading the Council over the agreement….for five years. What was always lacking was an explanation for why she continued to lie to Dallas residents about it for that long. Not one word of any defense of her focused on why it was wrong for a city official to align herself against citizens fighting irresponsible drilling and not tell them about that alignment as the entire city went through a multi-year reassessment of urban drilling, first with a moratorium on new permits, then a gas drilling task force, then the permitting process for the Trinity East permits themselves.

instead she directed city staff to distort the system to enable illegal permits to appear legal. Zoning classifications appeared or disappeared depending on the forum. One-off exemptions were carved out as necessary. Park drilling? Perfectly fine under these "special" set of circumstances. Flood plain drilling? No problem either. Anything to make these square pegs fit in otherwise round holes.

Common decency and allegiance to democratic principles demands that she should have publicly disclosed the agreement with Trinity East the minute a review of current city drilling policy began. She did not. When it was involuntarily disclosed for her by the Observer, she looked exactly like the co-conspirator she was.

There's no question that the fight citizens' groups have waged against the Trinity East permits led directly to the disclosure of the agreement. Based solely on circumstantial evidence, it was clear that there was some kind of unpublicized deal that had been "cut" between City Hall and Trinity East. Looking for it became the political equivalent of looking for Dark Matter in the Universe. Everything happening pointed to its existence, but you couldn't actually see the thing itself.

But here's the punch line. Citizens only started to look for that deal after Suhm and the Mayor decided to fast-track the Trinity East permits in late November.  It was that decision, made without any warning to the residents that had been involved in the drilling fight, and abruptly ending a year-plus long moratorium on new gas permits, that re-energized opposition and led to Suhm's resignation only six months later. Suhm fracked herself the minute she began to plot with the Mayor to undercut due process and try to pull a fast one on citizens. If they hadn't been in such a clumsy rush to get the Trinity East permits approved, none of this would have happened like it did.

Last week's municipal elections solidified a slightly more independent Dallas City Council, with new and re-elected members who openly oppose the Mayor's pro-drilling stance. Trinity East's permits, which needed a Council super-majority to be approved, look to be doomed. Rawlings' own political future is clouded – how many North Texas mayors have unpopular proposed refineries named after them? The landscape of city politics has changed over the last six months. Citizens fighting City Hall did that. But it was City Hall itself who set it in motion.