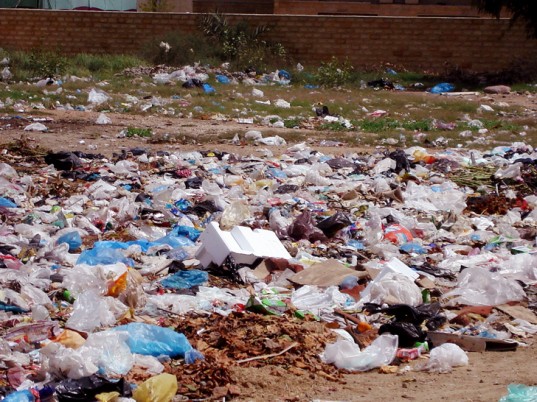 We missed this the first time around, so we're glad that "Living on Earth" caught it again. A group of scientists, including marine biologist Chelsea Rochman, recently signed an article in the magazine Nature that called for classifying plastic as a hazardous waste.

What's the rationale? It turns out to be pretty solid and based on current regulations. As Rochman described it,

Waste is basically separated into two categories, those that are non-hazardous like grass clippings, and those that are considered a hazard, which are often based upon this long list of priority pollutants, or substances that the government deems are hazardous to organisms. And we found that plastics are associated with 78 percent of these priority pollutants listed by the US EPA and 61 percent listed by the European Union, either as a chemical ingredient of the plastic itself or when the plastic ends up in the aquatic environment; they absorb these contaminants from the water. And so from that perspective we thought maybe plastic as a waste product should also be considered as a hazardous substance.

Rochman cites styrene in Styrofoam as an example of a well-known pollutant that's incorproated into plastic. Another is vinyl chloride that's used to make PVC.

Plastics' threat to marine life has been well-documented, but it's also a threat to those living downwind of places that burn plastic wastes – like an increasing number of cement plants, including TXI's huge Midlothian Kiln #5. Besides being assaulted by the leftovers of the ingredients in the original plastic, downwind neighbors are also subjected to entirely new pollutants that are made ONLY when plastics are burned. The most notorious of these is Dioxin, one of the most potent poisons ever tested.  Dioxin is what made Agent Orange so toxic to Vietnamese and veterans alike. It's why Times Beach Missouri is a Superfund Site. And it's what's released every time plastics are burned.

Incineration of plastics is dramatically increasing despite producing this kind of pollution. Classifying this waste as "hazardous" might be the only way to limit their use as "fuel" in cement kilns that weren't built to be garbage incinerators.