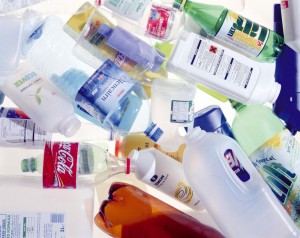 One of the reasons it's so disheartening to have EPA rollback the deadline for new cement plant air toxics standards and gut the PM pollution provision of those standards is because of the large and fundamental shift in what's being burned is taking place within the industry. Downwinders across the country need the protection of these new rules as soon as possible, as everything, including the kitchen sink, is being thrown into kilns.

There's a determined effort underway nationwide for cement plants to secure new permits or permit "amendments" or "modifications" to burn increasing amounts of municipal and industrial garbage, including lots and lots of plastics. With new regulation of hazardous waste burning in the US taking some of the fun and profit away from that practice, the trend is now headed toward burning all kinds of "solid waste" including hard to recycle bits of municipal and industrial garbage like plastics and car "fluff" – all the non-steel parts of a car or truck, including dashboard, electronics, interiors, brake linings, etc.

Locally, TXI's 2011 permit amendment – given without public notice or opportunity for comment – is the worst example of this national trend, although Holcim and Ash Grove are also burning tires, used oils, and other kinds of industrial waste already.

Now word comes of the CEMEX plant in Louisville also making plans to burn plastics and other kinds of garbage, but

"…industrial pollution has been an issue in southwest Louisville for decades. The plant is near the coal-fired Mill Creek power plant, and residents have long complained about dust and soot from both.

Denise Allgood, vice chairwoman of the Valley Village Homeowners Association, said she was not familiar with the proposal and said any change involving air pollution is likely to be sensitive.

The (pollution) that’s coming out of that place now is of great concern,” she said. “We’ve been told by the powers that be that’s it’s better than it has ever been, but I would hope that whatever (CEMEX) is considering, they are also considering the health and welfare of the people in this area.”

What could make the problem wortse? Burning plastics that release exotic new chemicals that can hitch a ride on all that old soot and dust. We're entering a whole new era of contamination by incineration once plastics-burning becomes widespread in the nation's cement kilns. That's a big reason why we need the added protection of the EPA rules.