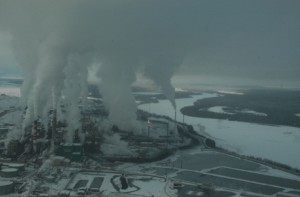 On the heels of the World Health Organization declaring air pollution a carcinogen, a study published this week from the University of California-Irvine and University of Michigan found higher levels of specific carcinogens in communities downwind of Canadian "oil, gas and tar sands processing zones", and higher rates of Luekemia and non-Hodgkin’s lymphoma among men living in those downwind communities.

Despite their rural location, the recorded levels of the carcinogens, including 1,3-butadiene and benzene, were higher than in some of the world's most polluted cities. Examining area health records that went back a decade showed the number of men with leukemia and non-Hodgkin’s lymphoma was greater in the communities closest to the pollution plumes.

The authors strongly recommended that the industrial emissions be decreased to protect both workers and nearby residents.

“Our study was designed to test what kinds of concentrations could be encountered on the ground during a random visit downwind of various facilities. We’re seeing elevated levels of carcinogens and other gases in the same area where we’re seeing excess cancers known to be caused by these chemicals,” said UC Irvine chemist Isobel Simpson, lead author of the paper in Atmospheric Environment. “Our main point is that it would be good to proactively lower these emissions of known carcinogens. You can study it and study it, but at some point you just have to say, ‘Let’s reduce it.’

Co-author Stuart Batterman, a University of Michigan professor of environmental health sciences, agreed: “These levels, found over a broad area, are clearly associated with industrial emissions. They also are evidence of major regulatory gaps in monitoring and controlling such emissions and in public health surveillance.”

Dr. Batterman is familiar to Downwinders old timers as being the first scientist to take on the state's laughable "Health Risk Assessment" of TXI's burning of hazardous waste at it Midlothian cement plant. In what became known simply as the "Batterman Report," his mid-1990's critique of the official document was devastating in its scope and depth. It became a template on how to deconstruct any TCEQ attempt to gloss over the dangers of living downwind of a large polluter.

In this new study, Dr. Batterman and his colleagues monitored emissions in the rural Fort Saskatchewan area downwind of major refineries, chemical manufacturers and tar sands processors owned by BP, Dow, Shell and other companies in the so-called “Industrial Heartland” of Alberta. Taking random one-minute samples in 2008, 2010 and 2012, the results were very similar over time – amounts of some of the most dangerous Volatile Organic Compounds were 6,000 times higher than normal. Higher than in Mexico City during the 1990s or in the still polluted Houston-Galveston area.

Simpson said the findings were important for other residential areas downwind of refineries and chemical manufacturers, including parts of Los Angeles.

“For any community downwind of heavy industrial activity, I would say it’s certainly prudent to conduct surveys of both air quality – especially carcinogens – and human health."