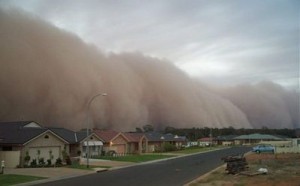 Last summer we told you about a nationwide Centers For Disease Control/National Institute for Occupational Safety and Health (NIOSH) warning to gas and oil field workers about rampant silica air pollution at fracking sites throughout the country. Research had found that pollution standards were being trampled at every site they tested. These were all tests done within the fence line of the well site, so nobody knows what the off-site impacts were/are, or how far downwind they can extend.

Now comes a recent follow-up report that breaks down all the information that was the basis of that 2012 industry warning, and its gruesome. Because it's so detailed, we're pasting it in blocks below in one narrative feed.

Fracking uses a lot of sand. There's an entire silica pollution cycle within fracking that's only now getting the attention it deserves. The mining of sand for fracking can take place miles away from the gas or oil plays and threaten new areas never touched by a well. It takes lots and lots of water. There are lots and lots of trucks, and lots of silica in the air at the mine. Just ask the folks along the Red River, to the northwest of DFW in what used to be pristine rolling timbered hill country.

Once it gets to the fracking site, it creates the clouds of silica air pollution that OSHA is so concerned about. The level of exposure the feds found at some of the fracking sites they studied was "enough to overwhelm the maximum use concentration ratings for the half-mask, air-purifying respirators that workers typically wore" while working at the site.  Breathing silica is like breathing sand or cement into your lungs. Eventually it fills them up and hardens your air passageways and you suffocate to death. Happens in the cement industry a lot. We know this is a real and current hazard to workers at the site. We have no idea what kind of hazard it is to people off-site. None. Zero. Nada.

This is why regulators must be cautious in deciding things like "setback distances." The difference between 1000 and 1500 feet could be a dramatic drop-off in silica pollution. That could be an important margin of error for public health we need but don't know much about right now.

Here's the story from Robert Iafolla in Bloomberg:

The concentration of silica in the air workers breathe exceeded occupational health criteria at all 11 hydraulic fracturing sites tested by the National Institute for Occupational Safety and Health, the American Industrial Hygiene Association announced July 31.

In some instances, the samples exceeded OSHA's PEL by a factor of 10 or more. That level of exposure is enough to overwhelm the maximum use concentration ratings for the half-mask, air-purifying respirators that workers typically wore, the study said.

“Although effective engineering controls for crystalline silica are well established in other industries, controls to limit silica-containing dust generation during hydraulic fracturing are only now emerging due to the relatively recent understanding of the hazard and magnitude of exposure risks,” the study authors wrote.

The study appears in the Journal of Occupational and Environmental Hygiene, published jointly by AIHA and ACGIH.

NIOSH first flagged the occupational hazard of silica exposure at fracking sites in a June 2012 Hazard Alert. The journal article describes the research that informed that alert (42 OSHR 576, 6/28/12).

Silica sand is a crucial and common component in many fracking operations. Silica is often mixed with the water and chemicals injected into shale formations during fracking, with silica acting as a “proppant” to keep the underground fractures open to allow oil or natural gas to flow. Approximately 28 million metric tons of silica sand was used in fracking during 2012, according to the U.S. Geological Survey.

OSHA's proposed regulations for silica could lower the PEL to 0.05 milligram per cubic meter, although that has been met with fierce resistance from industry. The proposal has been on hold at the White House Office of Management and Budget since February 2011.

Researchers took samples at fracking sites at five shale formations: Bakken in North Dakota, DJ Basin in Colorado, Eagle Ford in Texas, Fayetteville in Arkansas, and Marcellus in Pennsylvania. The fracking operations at those locations used silica as the proppant, with the exception of the Bakken site, where 60 percent of the proppant was a ceramic material.

None of the 10 samples taken at Bakken exceeded OSHA's PEL. Two-thirds of the samples at Marcellus, 54 percent at Fayetteville, 53 percent at DJ Basin, and 50 percent at Eagle Ford went over the PEL.

Typical fracked gas or oil wells go through 12 to 20 stages, with each stage requiring hundreds of thousands of pounds of sand, creating airborne dust at the sites, the study said.

Sand is delivered from tractor trailers and pumped with compressed air through fill ports into on-site storage and delivery vehicles known as “sand movers.” Those sand movers use motor-driven belts called “dragon tails” to supply sand to blender trucks, with larger loads requiring multiple vehicles moving sand across a transfer belt. Blender hoppers pump the sand-as-proppant through a manifold, piping, and into the well.

Workers operating sand movers and transfer belts are exposed to the highest levels of silica, the study said.

Overall, the study found seven points of dust generation that were common at all 11 sites:

• from “thief hatches” on the tops of sand movers during filling,

• from the sand mover belt,

• from the momentum of falling sand below the dragon tail at the blender hopper,

• from transfer belts when sand is deposited onto the belt and conveyed to the blender,

• from sand leaving the end of the dragon tail,

• from fill ports of sand movers during refilling operations, and

• from truck traffic at the fracking site.

The study said that about 435,000 workers were employed in the U.S. oil and gas extraction industry during 2010, with nearly half employed by well servicing companies, including companies that use fracking.

The study “Occupational Exposures to Respirable Crystalline Silica During Hydraulic Fracturing” is available at http://tinyurl.com/mn5sbc3.