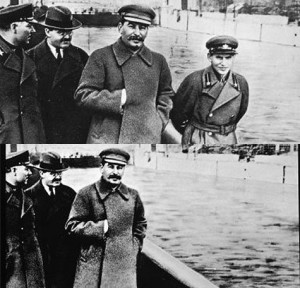 Any doubt that Dallas City Hall is more interested in protecting the Trinity East gas leases than Dallas residents as it writes a new gas drilling ordinance was surely removed yesterday when City Attorney Tammy Palomino flatly lied and told City Plan Commission members that they had not decided on a 1500-foot setback, or buffer zone, between homes and other "protected uses," even though they had done precisely that at their June 20th meeting.

Employing the Orwellian language of a Soviet history writer, Palomino simply choose to ignore the results of a decision she didn't like and pretend the vote never happened. She argued that there was "no consensus" on the CPC for a 1500-foot setback – even though that very word was used to describe the results of June 20th meeting by CPC members themselves, as well as the media.

Instead, she handed out an official "summary" of CPC drilling recommendations to-date that not only only didn't include ANY mention of the 1500-foot setback decision, but instead listed a 1000-foot setback limit that had specifically been rejected by the Commission!

That missing footage is critical. 1000-foot setbacks, with a variance (or exception) up to 500-feet, were recommended by the city's gas drilling task force, but we now know those recommendations were tailored to fit the circumstances of the Trinity East lease sites along the Trinity River in northwest Dallas. That is, with a variance that could put wells 500 feet from homes, the Trinity East sites could be approved. With the CPC's 1500 foot-setback, there's only a variance to 1000 feet. That makes it impossible for Trinity East to set up shop where they want. And that's why Palomino deliberately, but unethically, left the 1500 setback out of her "summary."

The problem for Palomino in trying to pull this kind of disappearing act is that there were way too many witnesses to the original vote, including reporters. According to KERA's account  "One of the first changes that grabbed consensus of the Plan Commission was an increase to the buffer zone or setback between gas wells and homes, businesses, schools, and recreational areas.  Plan Commissioners want 1500 feet, not the 1,000 recommended by the task force."  Channel 4 reported the same thing. There's also the fact that the city archives audio tapes of every CPC meeting, and citizens have have begun to videotape the meetings to catch this kind of bullying by staff.

What all of this will show is that on June 20th CPC member Paul Ridley took great pains to clarify that the CPC had indeed reached a consensus that they wanted a 1500 foot setback – considered the most protective setback currently used by any North Texas city. He even asked the question, "Do we have consensus on this?" and heads all nodded and not one verbal objection can be heard – other than from Tammy Palomino – who is stuttering that the city attorneys are going to have to make sure they can do this (no explanation of why Dallas can't). There's no question about what happened.

Which is why even the most cynical observers were shocked at the clumsy effort by Palomino to erase the decision from history by way of her "summary." It's like the City can't pass up an opportunity to create an ethical crisis whenever it deals with the Trinity East leases.

All the video and audio tape is being assembled into a nice neat package for the public and media. The case against Tammy Palomino will be devastating. As a result of her premeditated misrepresentations, Palomino should resign, or at the very least be re-assigned away from work on the new gas ordinance. She's representing Trinity East in these proceedings, not the citizens of Dallas.

Yesterday's episode was but the most extreme example of the kind of bullying and steamrolling that staff is employing against the CPC to end up with an ordinance that is Trinity East-friendly. As they have for the past three years or so, they're contorting the system to make it fit Trinity East's permits.

Besides the setbacks issue, staff really wants the CPC to OK gas drilling in parks, and a majority of CPC members today were willing to say out loud they supported that goal. That's right – after 7 months of crowds filling city hall to protest drilling in parks, Official Dallas is still moving toward approval of that idea. It's based on the idea of "unused" park land – a concept that has never been defined by the city or anyone else.

Trying to further this goal, staff actually came to Thursday's meeting with a US Parks Department definition of "active" and "passive" park land with the idea that Dallas could adopt something similar and allow drilling on the "passive" acreage. According to the list, "passive" park land is defined as land used for hiking, rock climbing, horseback riding, mountain biking, and camping, among others activities. Sounds pretty "active" doesn't it? Despite their propensity to allow park drilling it struck the CPC the same way and they firmly rejected staff's approach. Still, just like the 1500 foot setback issue, staff won't be satisfied until they get Trinity East what it wants.

Which brings us to a hard truth that the media and the public need to absorb. As bad and blatant as it is, Tammy Palomino's unethical behavior is only a symptom of a much larger rotten problem with this entire gas drilling ordinance process that has been present from before the task force was created right up until now.  It's impossible for staff to both be advocates for the Trinity East leases in the writing of a new gas ordinance and give objective counsel to the CPC and Council on how to write the most protective ordinance. They cannot serve two masters.

Palomino and others have been told they need to find a way to make sure Trinity East gets what it wants in this new gas drilling ordinance. That makes city staff just another lobbying arm of Trinity East, not honest brokers trying to produce the best and most protective policy for Dallas residents. Every piece of advice they give is meant to further the leases, not the public good.

Because of this fact, an independent counsel needs to be brought in for the purpose of helping draft this new gas drilling ordinance. Policymakers need to have the best information, the most objective information, if they're going to make good policy. They're not getting it from city staff when it comes to drilling.

It's time to quit pretending this isn't a big problem. When city attorneys start trying to erase public policy decisions because they conflict with a private interest they're serving, the system is no longer working. It's corrupt and must be replaced before that corruption is allowed to spread.

Stay tuned. You're going to be hearing a lot more about this.

Scheduling Note: Although the CPC released a schedule for its work on the drilling ordinance only last week, including three public hearings, things may be changing quickly with additional workshop times and different dates and times for hearings. There was a lot of talk about schedule changes on Thursday, but nothing was decided. Right now the first opportunity for you to express outrage at this latest development is a public hearing slated for August 15th, 4 to 6 pm, at City Hall but stay tuned to make sure.