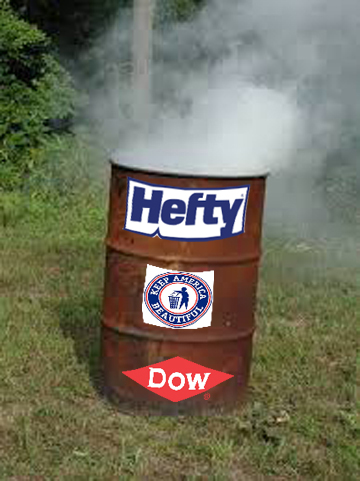 And They Want To Do It Here…

We’ve been warning you for a while that garbage burning was coming to North Texas one way or another.

What we didn’t anticipate was that “Keep America Beautiful” would bring it.

That’s right. The same group that gave you Oscar “Iron Eyes” Cody crying over litter is now prepared to make your own eyes water and sting from the air pollution it wants to encourage by burning municipal solid waste, especially “hard-to-recycle” plastics.

Touting bright orange “energy bags” as a quick and easy alternative to throwing those plastics away, a news release issued by the Keep America Beautiful folks, your friends at Dow Chemical, and Reynolds, the makers of “Hefty” trash bags, claims they’re “a convenient way to collect plastic materials that would otherwise end up in the landfill and offers a platform to promote positive behaviors to prevent this material from being wasted.”

What they don’t tout as much is their alternative to throwing these plastics into a landfill – throwing them into a furnace.

As long as cement kilns need a high-temperature flame to make their product, they have large energy costs. Typically, 30% or more of the costs of running a cement plant is in buying the flammable materials necessary to keep that flame lit. 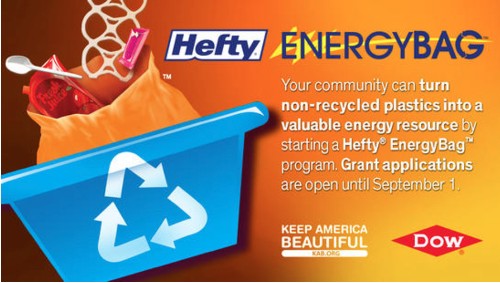 History has taught us that cement kiln operators will burn anything, including the kitchen sink, if they think it will help reduce those high fuel costs.

Kiln flames in Texas used to be powered by natural gas exclusively. Then it was coal. Then it was hazardous waste and coal. Then industrial wastes. And now municipal solid wastes. In bright orange plastic bags.

Cement plants don’t have to pay for the wastes, now termed “fuel,” for regulatory loophole purposes. In fact, because it’s now a “fuel,” they often get the waste for free or even get paid to burn it. It becomes a new center of profit in the company besides making cement.  Maybe even more important. In the 1990’s, there were plenty of rumors about how the TXI cement plant in Midlothian would burn a lot of hazardous waste they got paid a handsome fee to take, but not have much cement product to show for it.

While garbage burning cement kilns have been on the rise in the developing world, the practice hasn’t caught on in the U.S.

Dow’s and Keep America Beautiful’s friendly neighborhood “Energy bags” are a way to jump start it.

This is already happening in Omaha, where 8,500 homes have filled 13,000 “Hefty Energy Bags”  since the program’s launch in October. That’s resulted in more than 13,000 pounds of plastics being burned in a near-by Ash Grove cement kiln. They’re so excited about burning plastics at Keep America Beautiful that they’re not only endorsing the practice, they want to bring it to a cement kiln near you.

At a news conference to announce the offering of cash money grants to local communities who wanted to try the option, they unveiled a contiguous states map of the US where they’d like to see the “energy bag” concept implemented. The approximately 50 locations on the map identified by a red (not orange?) star are almost all sites adjacent to large cement plants – including Midlothian, immediately south of the Dallas and Tarrant Counties line, and home of the largest concentration of cement manufacturing in the nation. 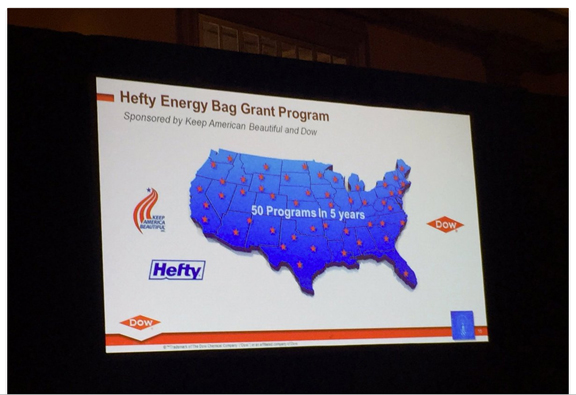 Local candidates for eager participation in the project include TXI, the cement plant that burned hazardous waste by the thousands of tons from 1987 to 2008, Holcim, which has sought permits to burn carpet scraps and shingles, and Ash Grove, the same operator as the one burning Omaha’s plastic bags now.

BURNING PLASTIC IS BAD FOR PUBLIC HEALTH AND PUBLIC POLICY

1. It replaces real recycling with burning.

Once you have a hungry garbage burner, you have to keep feeding it with more and more garbage, decreasing the market for real recycling.

This is already happening with tires. There are good tire recycling programs that can’t stay afloat because local governments have promised the local cement kilns a certain volume every year.

2. It gives an incentive to the plastics industry keep to just making plastics that you can’t recycle.

The real answer is to reduce and quit producing those “hard-to-recycle” plastics, not giving them a cheap way to get out of doing so.

3. Burning plastic produces lots of toxic air pollution – and all of DFW is downwind of Midlothian

Burning plastics produces toxic air pollution, a percentage of which escapes the smokestack and ends up in the air you breathe, the soil in your garden, and the food you eat and drink. Specifically, burning plastic creates lots of Dioxins and Furans – the same ingredients that made Agent Orange so toxic. The same poisons that made the State of Missouri evacuate the town of Times Beach in 1983.

Burning plastic also releases metals into the air, like cadmium and lead.

Other chemicals released while burning plastics include benzo(a)pyrene (BAP) and polyaromatic hydrocarbons (PAHs), which have both been shown to cause cancer. If plastic film or containers are contaminated with pesticides or other harmful substances, those will also be released into the air. If plastics are burned with other materials, whole new toxic chemicals may be created from the interaction of the different substances. 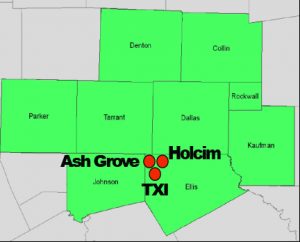 But wait! Don’t you want to divert more garbage from going to landfills?

Yes you do, but by eliminating, reducing and recycling the garbage – not taking a match to it.

Landfills are nasty things. They’re big and smelly and they leak. Sometimes they leak and contaminate ground and surface water.  But these days you usually can trace the plume of those leaks and contain them before they get in drinking water.

On the other hand, once a piece of dioxin-contaminated soot is shot through a smokestack into the atmosphere, you have no idea where it’s going. You’re turning the whole sky into a landfill, full of solid and gaseous residues of refuse. What you didn’t want to drink, you’re now breathing. That’s the opposite of progress.

Taking a look at the Board of Directors for Keep America Beautiful, it’s no wonder they have a soft spot in their heart for large plastics manufacturers. They have not one, but two members from DOW, who, we are sure, thought this was a splendid idea.

Howard Ungerleider is Vice Chairman and Chief Financial Officer of Dow, and Greg Jozwiak is the Business President for the Elastomers and Electrical and Telecommunications businesses for the company. Prior to assuming his current role, he served as North America Commercial Vice President for the Packaging & Specialty Plastics business. Hmmmm.

But wait, there’s more! KAB has a board guaranteed to offend just about everyone. Not content with two Dow executives, it also has two Nestle Corporation members, a representative of Waste Management Inc., McDonalds, Keurig, Anheuser-Busch, and Phillip Morris – yes, that Phillip Morris.

Those are the words, spoken in a deep baritone by William “Cannon” Conrad, that ended that famous 1971 Keep America Beautiful commercial in honor of Earth Day. They ring as true now as then.

And so, people, we’re asking you to take action to discourage this kind of BAD IDEA from ever coming-up at a Keep America Beautiful board meeting again – send an email to their new Chair, Helen Lowman.

Ms. Lowman is a former FEMA and Peace Corps executive in the Obama Administration. She’s from Texas, worked at TCEQ, and graduated from Austin College…. So maybe messages from her fellow Texans will have more of an impact. 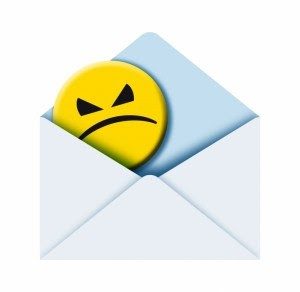 And if you want to leave a public message for the group too, here’s the group’s FaceBook site.

Other citizens groups, including some national alliances and networks are gearing up to take on this latest proof that all wastes, no matter how toxic, roll downhill to cement kilns eventually.

Meanwhile, Downwinders is taking the lead and beginning the push back we hope buries this project in the bright orange trash heap of history. Join us in not just saying “No,” but “Hell No.” Send that email now and then find two other people that will do the same. Thanks.