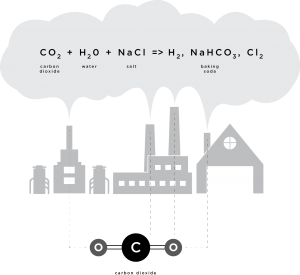 Cement plants are among the world's largest sources of CO2. In order to reduce their carbon footprints, either voluntarily or to comply with new environmental regulations, as well as make a buck, owners are trying out different strategies to turn their Greenhouse Gases into just plain green cash.

As far as we can tell, the "SkyMine" pilot-project announced for San Antonio's Capital Aggregates Cement Plant is still on schedule  for operation later this year. Employing 50 people, the first-of-its-kind facility will convert the cement plant's carbon dioxide into baking soda and hydrochloric acid that's aimed at oil and gas field use.

Now comes word that a LaFarge Cement Plant in Canada is hooking up with a fuel cell company to make a slightly more progressive product from its GHGs:

"Mantra Energy Alternatives has struck a deal with Lafarge Canada to deploy an electrochemical reduction technology at Lafarge’s No. 9 Road cement plant.

“This will be the first pilot plant of its kind in the world,” said Mantra’s vice-president Patrick Dodd in a press release.

Mantra is eying the formic acid for use in its patented fuel cells, which it bills as a significantly less expensive fuel cell with greater power density."

Granted, the manufacturing of oil and gas chemicals sounds more likely for one of the three huge Midlothian cement plants to attempt than diving into the alternative energy business, but at least it's something. The end products can change and adapt but these projects begin to put the infrastructure of a supply and demand system in place while seeing potentially large decreases in CO2 output. In 2014 America, the fastest way to get reductions in GHGs is to make it profitable to do so. These experiments pave the way for that to happen.

There's no question that the TX/ Martin-Marietta, Holcim and Ash Grove cement plants are the largest stationary sources of CO2 in North Texas, or that together, they form a huge GHG hotspot. All the old coal-fired power plants that would have challenged them have been shuddered or converted to gas.

While (forced) modernization at all three plants like the conversion from wet to dry kiln technology has brought all emission totals down, particularly CO2, the fact remains that the huge scale of operations in Midlothian means there's no other facilities that churn it out as much. And yet not one creative idea for how to reduce those huge local emissions has been announced from any of those companies. You can't just use the Texas excuse because the San Antonio experiment is happening despite no immediate government mandate, especially on existing facilities. And you might think that the first company to do so would receive some needed good PR. But nope.

This has been another chapter of "Why Don't We See This in Midlothian?"