When you click on the new SharedAirDFW.com site, the default setting shows you the location of the SharedAirDFW monitors and the real time wind direction and speed. 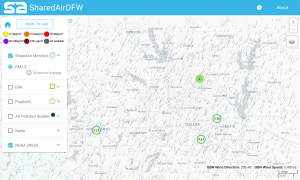 The Menu gives you a choice of three different PM monitor networks to look at: SharedAirDFW, the EPA, and Purple Air. You can look at them one at a time or all at once.

The menu also allows you to see where all the major air pollution permits are located in the City of Dallas. Click on the black dot and it reveals the name of the air pollution permit holder as well as the volume of pollution in tons per year reported in 2018 (the last fully reported year). We only have this mapped inventory of air polluters because of the Paul Quinn College report “Poisoned by Zip Code.” The City of Dallas has no such inventory or map. 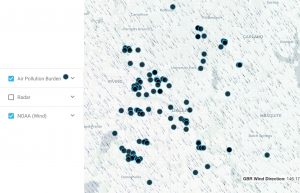 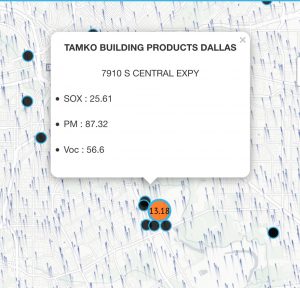 When you click on a SharedAirDFW monitor site, you’re able not only to see the current PM levels, but the last 24 hours of data as well. Click “more data” at the bottom and you can look at what levels were recorded during any period of time the monitor was operating by adjusting the start and stop times on the pop-up calendars.

Since it began collecting data on the afternoon of August 31st, the Joppa Zion Mothership monitor has consistently recorded the highest average levels of PM among all the deployed SharedAirDFW monitors, as well as all EPA and Purple Air monitors in DFW. These bar charts show the level of PM recorded from most of the current SharedAirDFW network monitors from 8/31/20 to 9/14/20. They’re all accessible to the public through the site. 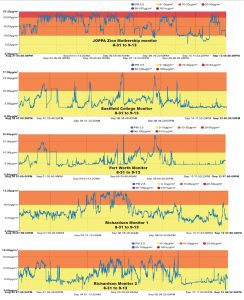 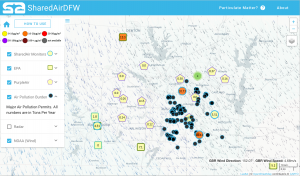 After three years, and many thousands of hours and dollars, citizens have their own

It’s easy to use, operates in real time, and its monitors are being put where the pollution burdens are greatest.

The Joppa Zion Mothership Monitor: on the Network’s digital map and on its pole after deployment.

By January they’ll be 11 more monitors joining it in the Freedman-founded community.

A three-year high-tech collaboration between the University of Texas at Dallas, Downwinders at Risk, the City of Plano, Dallas County, Dallas College, and Paul Quinn College came to fruition today with the official debut of the the SharedAirDFW Network –  online, and with an outpost in one of the most polluted neighborhoods in North Texas.

It becomes the first and only regional “hyper-local” air monitoring network in Texas and one of the only ones being built by any US city.

“This network is the purest, most dramatic expression of our 26-year old goal to provide citizens with the tools government won’t,” said Downwinders Director Jim Schermbeck, who’s helped shepherd the Network since it was a National Science Foundation grant runner-up in 2017. “We see SharedAirDFW’s debut as the public health equivalent of turning on electric streetlights for the first time at the turn of the 20th Century. We’re building a utility  – the full impact of which won’t be realized for years.” 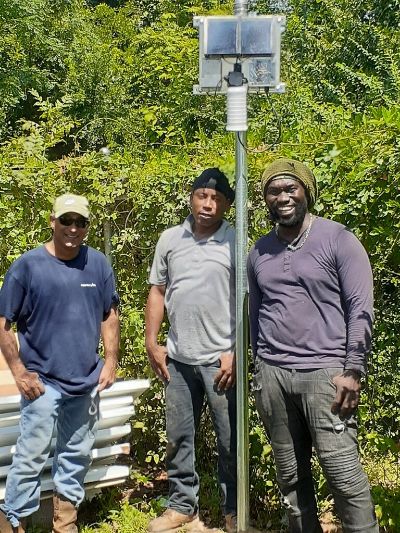 Debuting with eight Particulate Matter (PM) air pollution monitors located from Richardson to Southern Dallas and Mesquite to Fort Worth, the network is scheduled to install over 100 more in the next 12-24 months, including blanketing Dallas neighborhoods whose residents say they’re already breathing bad air but have no way to prove it.

In the last decade published research on the human health effects of exposure to Particulate Matter air pollution has linked it to a variety of illnesses and diseases, including developmental impacts such as Autism, Parkinson’s, Dementia, and IQ loss. These effects have been documented at exposure levels well below U.S. EPA regulatory limits.

All the monitors in the network were built at the Physics Laboratory at the University of Texas at Dallas campus in Richardson. They’re being distributed to members either in clusters of 11, with one larger hard-wired “Mothership” accompanying ten smaller solar-powered ones or the Mothership as its own stand alone unit.

ALL DFW PM MONITORS DISPLAYED ON A SINGLE MAP
PM Air pollution data collected from those monitors, along with information from EPA and DFW Purple Air monitors, are displayed in real time on a digital map accessible to anyone online at www.sharedairdfw.com. For the first time, a single website displays all the online monitors networks collecting PM air pollution data in North Texas on the same map.  Besides UTD, Downwinders at Risk, Dallas College, and Dallas County will be displaying the SharedairDFW map on their own websites.

Only Particulate Matter air pollution levels are shown by the SharedAirDFW       map now but larger monitors will also be capturing Ozone, or Smog levels. At some point in the near future, that data will also begin to be            displayed on the Network map.

MAPPING OF MAJOR POLLUTERS
Also on display are the locations of the major air polluters in the City of Dallas, along with their self-reported pollution volumes – a first-ever inventory of Big D’s air polluters that no level of government currently provides. 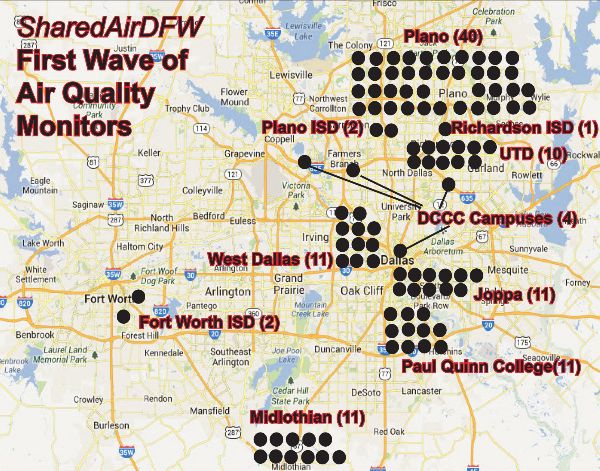 ONITORS IN MANY MORE PLACES
Currently there are only six EPA monitors for Particulate Matter Air pollution in all of North Texas, and only 12 Purple Air monitors online. With the ability to saturate neighborhoods with almost a dozen monitors apiece, SharedAirDFW allows residents, researchers, and policymakers to better pinpoint pollution plumes and health risks.

REAL TIME DATA
For the first time there’s a way for DFW residents get air quality information in real time instead of waiting for up to two or three hours at government monitor sites. The SharedAirDFW monitors display their readings every 30 seconds, 24 hours a day.

AN EMPHASIS ON ENVIRONMENTAL JUSTICE
For the first time there’s year-round, calibrated air quality data being collected in Dallas’ most polluted neighborhood – the Joppa community in Southern Dallas along the Trinity River. The “Joppa Zion Mothership” – named for the adjacent Church – began transmitting on Monday August 31st. It’s linked to two additional “satellite” monitors that began transmitting this last weekend. By January they’ll be 11 monitors in Joppa, making it the most densely monitored neighborhood not just in Dallas, but all of Texas.

Joppa’s monitors are the first of 33 air monitors Downwinders at Rik is deploying in so-called “fence line” locations. After installation in Joppa is completed, another 11 will be installed in West Dallas, and then in and around Midlothian as well.

In the two weeks since the first Joppa monitor was installed, it’s consistently recorded higher levels of PM pollution than other monitors in the SharedAirDFW network as well as local EPA and Purple Air monitors. Schermbeck said those results vindicate the decision to locate monitors in predominantly Black and Brown neighborhoods disproportionately burdened by their proximity to industrial polluters. “Our monitors are going where people are most harmed by air pollution, but least able to do something about it.”