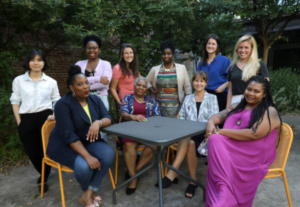 Dallas Morning News Consumer Watchdog columnist Dave Lieber found himself listening in on the annual “State of the Air” presentation we’re always invited to give at the Arlington Conservation Council. Lots of information about smog and PM pollution but what really got his attention was the description in the Q&A about the wholesale transformation of Downwinders’ mission and board since 2017. He was so impressed he decided to write about it for his next column. Here’s the flattering result with some great pics our Chair Evelyn Mayo, our founder Sue Pope and (almost) our complete board as of August 2021. Thanks to Dave for the coverage and to all of you for supporting us through this transition.

For those without a DMN subscription we’re reprinting the entire article below:

Most nonprofit boards can only dream of bringing in younger members and people of color to reflect their communities. This one did it.

Jim Schermbeck, the wise old battler against Dallas-Fort Worth air pollution for the last quarter century, was bragging about his group’s new generation of leadership and its new focus on protecting neighborhoods.

I was in a webinar listening to Schermbeck, program director for pollution fighter Downwinders at Risk, as he gave an overview of our air quality (it’s bad!) when the trophy wall thing perked me up. It had something to do with Dallas City Hall officials leaving their jobs. Forgive the gruesome image, but the symbolism was that their heads were hung up on a wall.

I turned up the volume on my computer so I could hear.

Putting it bluntly, white neighborhoods were allowed to create bottom-up plans that were presented to and accepted by city officials. But these neighborhoods where people of color live were forced to accept top-down plans imposed upon them by City Hall.

Schermbeck mentioned the group’s chair, Evelyn Mayo, a 26-year-old firebrand, and said, “This made her mad.”

Mayo helped organize several groups into the Coalition for Neighborhood Self-Determination, which agitated for fairness in community-created land use plans. Letters were sent to Dallas Mayor Eric Johnson, the City Council and City Manager T.C. Broadnax.

The power play appears to have worked. Three zoning officials decided to retire from the city. They are: Peer Chacko, the city’s director of planning and urban design; David Cossum, development services administrator; and assistant zoning director Neva Dean.

Kris Sweckard, the director of sustainable development and construction, was reassigned to the city’s aviation department on an interim basis.

“So at age 26, this woman has a department head on her trophy wall for a good cause,” Schermbeck was saying. “It’s just amazing to watch. If you ever think young people are not with it, and you want to build your confidence back up about people, please come to a board meeting or hang out with Evelyn and her friends for a while. They will restore your confidence about where we’re headed. She’s an amazing person, and our board is really great.”

I asked Mayo how she felt about the trophy wall analogy. “I don’t think it’s something you should aspire to,” she said. “We were simply reacting to circumstances presented before us.”

Later, she toughened it up a bit, saying: “Whether it’s a trophy wall or not, what’s happening at City Hall is a product of their own incompetence.”

Downwinders board member Misti O’Quinn told me that the coalition shined a spotlight on one portion of neighborhood zoning, and when you shine a spotlight you can expose. What does that mean for city officials? “You take away their sense of security,” she said.

I attempted to reach the four City Hall officials but was unsuccessful. When I ran this scenario up the flagpole to Broadnax, he provided a written statement to The Watchdog explaining that when several staffers announced their intention to retire this year, it presented an opportunity to realign their departments.

“Over the next several months,” he said, “we intend to simultaneously restructure permitting and planning and realign the departments and leadership that oversee them. Reorganizing these departments will maximize effectiveness and productivity.”

He made no mention of the coalition or its agitation.

Change with the times

This story runs far deeper than citizen agitation. Downwinders represents a model for how environmental and other nonprofits can alter their profile, their mission and their leadership.

As I looked at the group’s history, I saw how Downwinders has changed in recent years.

Formed in 1994 by Midlothian rancher Sue Pope and other rural residents and suburbanites, Downwinders’ mission for the longest time was fighting pollution caused by cement plants.

But by 2017, the year Mayo joined the board, it was becoming clear — thanks in part to the hideous Shingle Mountain dump site in southeast Oak Cliff — that Dallas needed a spotlight to focus on what activists and academics call historically racist zoning. That’s what allows dirty industries into poorer residential neighborhoods where people of color live. Correcting those inequities is called environmental justice.

In the next two years, the old guard board members, many of whom had served since the group’s creation, all dropped off. The board and its mission changed from rural/suburban to urban.

“It was very traumatic,” Schermbeck recalls. “But I’m so glad we did it because we’re more plugged in than ever before.”

Mayo says the worst moment came in 2019 when she was elected to the unpaid job of chair in what she calls “a somewhat contentious vote.”

The board is now all women; two are Asian-American, five are Black, two are Latina and three are white. Three members are in their 20s, and six are in their 30s. One member is 17 years old.

Most community nonprofits, especially in the traditional environmental arena, can only dream of putting together a board with that diversity.

Mayo, who teaches at Paul Quinn College, has a perfect resume for her leadership role. She majored in environmental science in college with a focus on race and ethnicity.

Working as a paralegal at Legal Aid of NorthWest Texas, she co-authored a study called “In Plain Sight,” which examined the governmental failures that allowed a disaster like Shingle Mountain to spiral out of control.

Then while teaching undergraduates at Paul Quinn, she and her students in 2020 completed a study – “Poisoned by Zip Code: An Assessment of Dallas’ Air Pollution Burden by Neighborhood.” You can guess the results of that survey.

The Downwinders’ main goal, in addition to continuing its legacy battle against dirty air, is to bring power and expertise to the city’s poorer neighborhoods that have had no say in dirty industries moving in.

“The legacy of racist zoning perpetuates unless you fundamentally redraw the map through these land use plans,” she says. “People who are affected must be involved in the decision-making process about what their neighborhood will look like. This will probably have better outcomes for their health and wellness.”

Yet, she adds, “People who live there and bear the brunt of the pollution are still not at the decision-making table.”

Mayo says her group needs all the help it can get.

“No matter who you are, we can put you to work if you’re interested and willing,” she says.