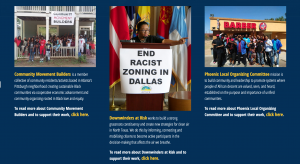 Today, the Peace Development Fund is using its national presence and contacts to help raise funding for Downwinders at Risk, under the banner of “Taking Back our Cities.”

We’re being featured on their website all day. We’re one of only 13 groups chosen to receive this kind of attention from the Fund.

We’re one of the few environmental groups in the country using land use planning tools to reduce residents’ exposure to pollution. Our aim is to dismantle the racism institutionalized in local zoning codes that have forced People of Color and industry to live side-by-side for decades.

Many of you helped us reach our Giving Day goal. But we need those of you who didn’t contribute on Giving Day to do your part today. Here’s your chance to join the fight for cleaner air and environmental justice. 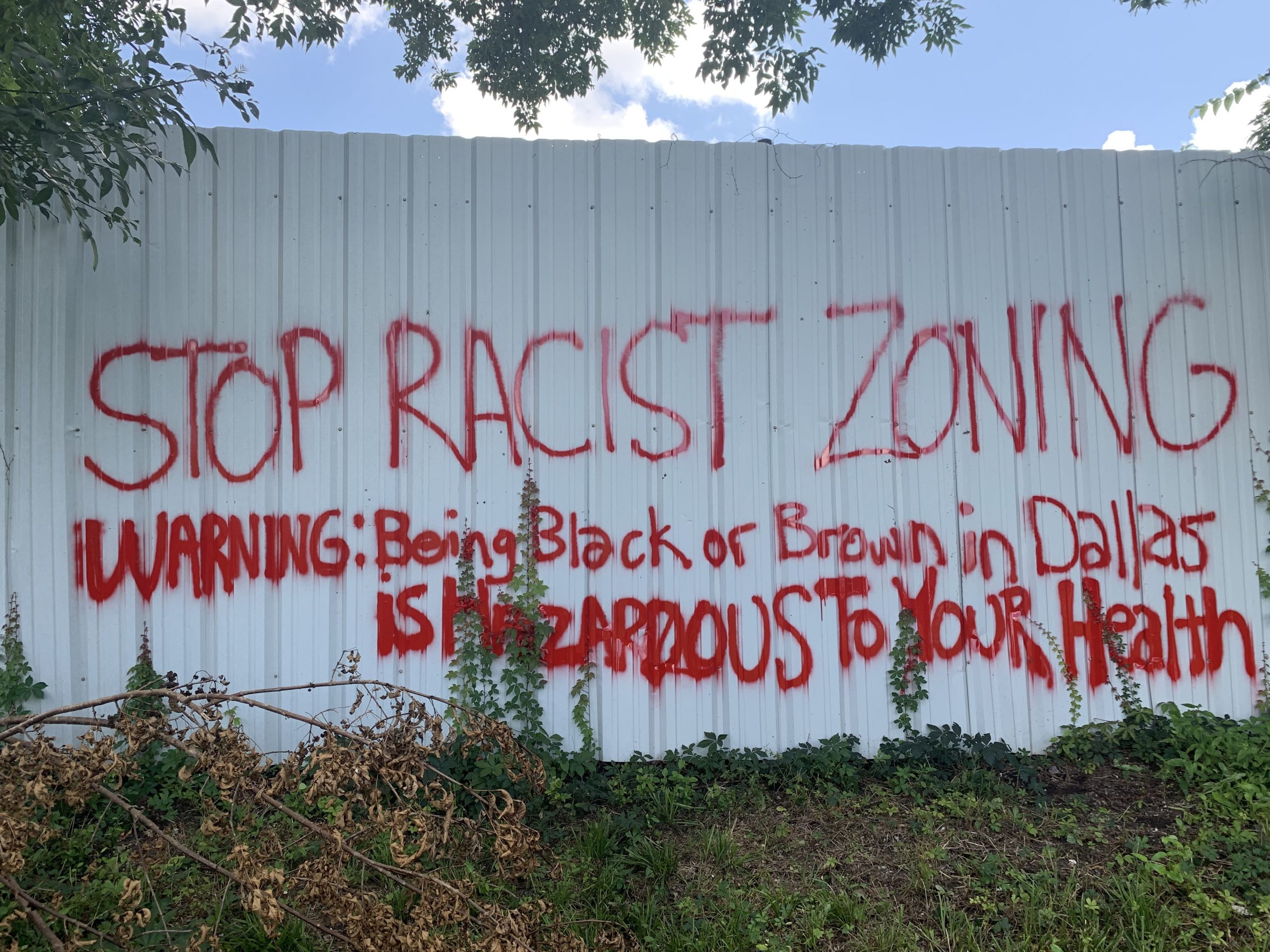 For most people, “zoning” isn’t a very interesting topic. How your property is classified by city government is of little concern – until you discover how few protections you have or how close a large polluter can operate near you. 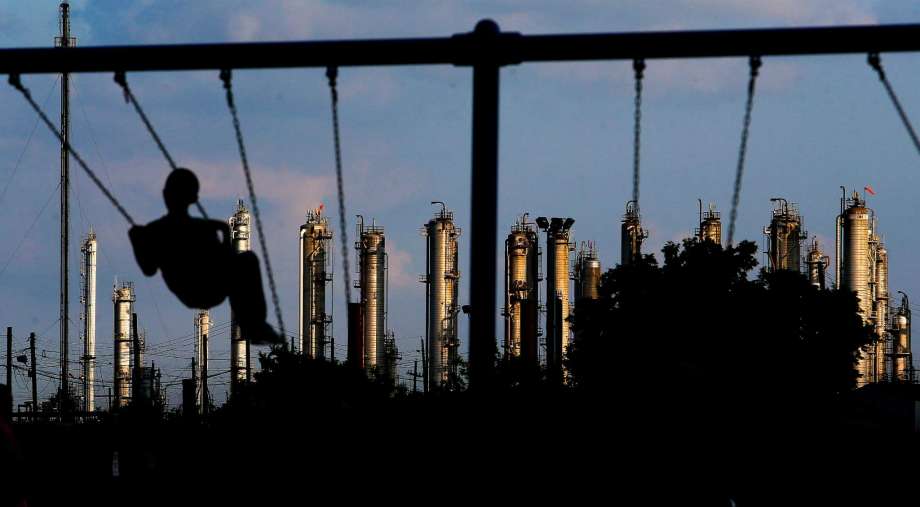 In Dallas as well as most American cities, People of Color have been historically forced by law or practice to live in neighborhoods they had to share with industry. The Trinity River floodplains were used as a large dumping ground for both people and factories deemed “undesirable” by white power brokers.

While illegal now, that institutionalized discrimination lives on in the form of obsolete racist zoning that still makes Southern Dallas a dumping ground.

Unless you change the zoning classifications in South Dallas that make it such a haven for dirty industry, the City’s pollution burden will remain concentrated there, stifling economic development and quality of life. 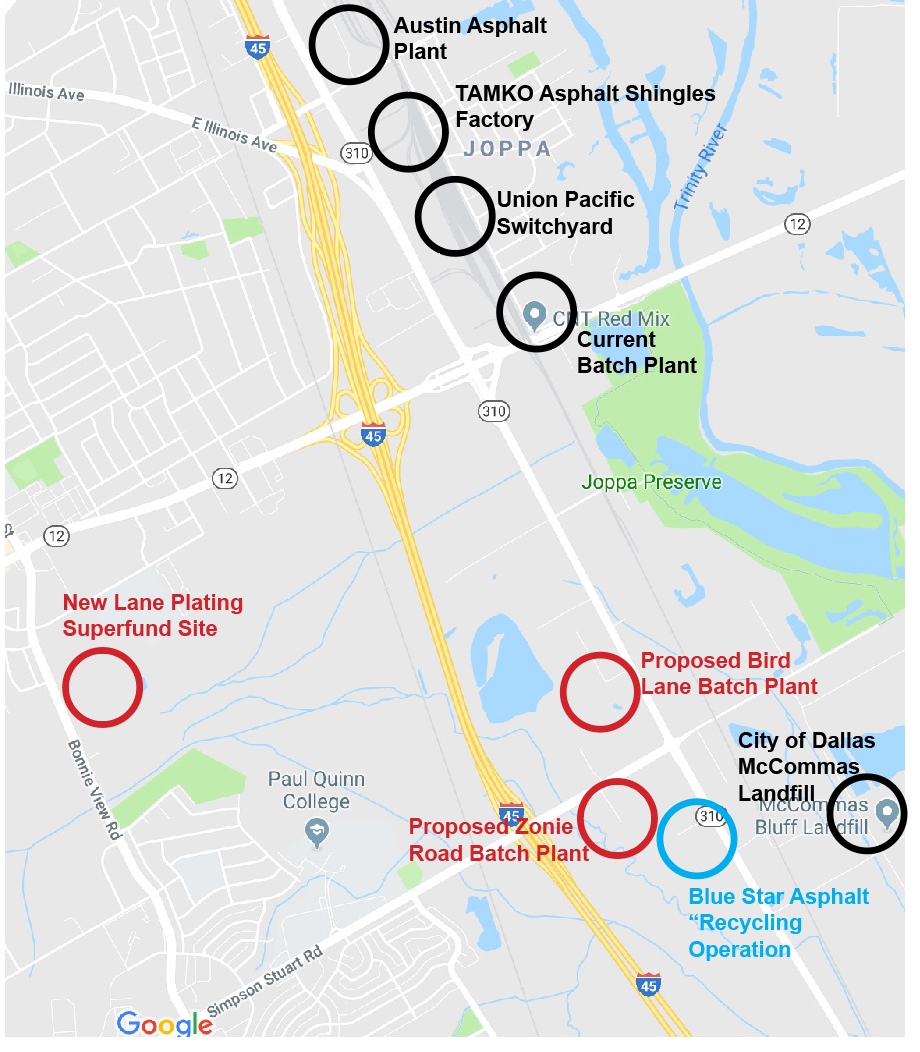 During the last two years Southern Dallas has fought off four proposed batch plants in the same neighborhood because the zoning directs them there. The notorious Shingle Mountain illegal dump took advantage of zoning loopholes to withhold notification of its activities from its neighbors. Instead of playing “whack-a-mole” and having to organize anew against every attempt to site a new polluter there, Southern Dallas residents need to re-write the leftover racist zoning laws and prohibit their part of town from becoming the default Big D dumping ground.

Downwinders is partnering with our friends at Southern Sector Rising and the Inclusive Communities Project to do just that. Dallas is gearing up for a once-in-a-decade review of the City’s MasterPlan that will invite residents to imagine how they want to change their neighborhoods. There’s an opportunity to submit new plans that reverse the racist zoning that plagues the entire Southern part of Dallas.

We’re working with specific Southern Dallas neighborhoods that want to give residents more green space, more buffer zones between themselves and pollution, and even begin proceedings to remove industry from their communities. It’s a 2-3 year process but the end result is increased Environmental Justice in places that desperately need it. 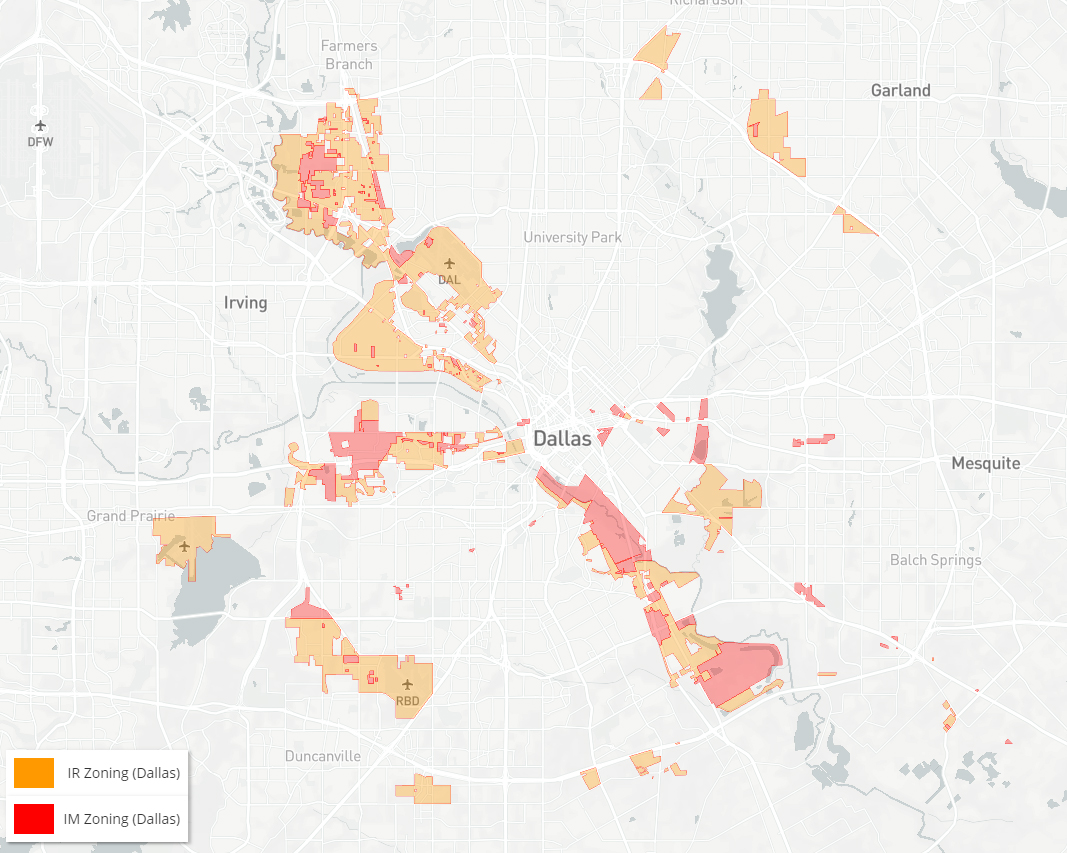 Research done during this pandemic shows Black and Brown residents are being  disproportionatey impacted by the COVIC virus.This is being attributed to a number of “pre-existing conditions” in the neighborhoods where they live, including lack of health insurance and health care facilities, poverty and…exposure to air pollution. We know that Black and Brown residents are more likely to be exposed to more and higher levels of air pollution than their white peers. 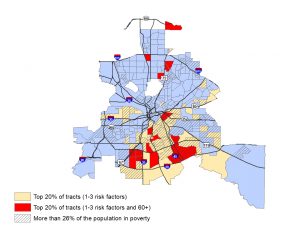 If you change the zoning so that Southern Dallas residents are not living side-by-side with polluters, you reduce their exposure to poisons and improve public health, including making them less vulnerable to viruses  like COVID.

“forwardDallas!” is the name of the process the City of Dallas is using to redraw its MasterPlan. It was supposed to begin this Spring but may not start until summer. It will involve lots and lots of neighborhood meetings.Downwinders, Southern Sector Rising and the Inclusive 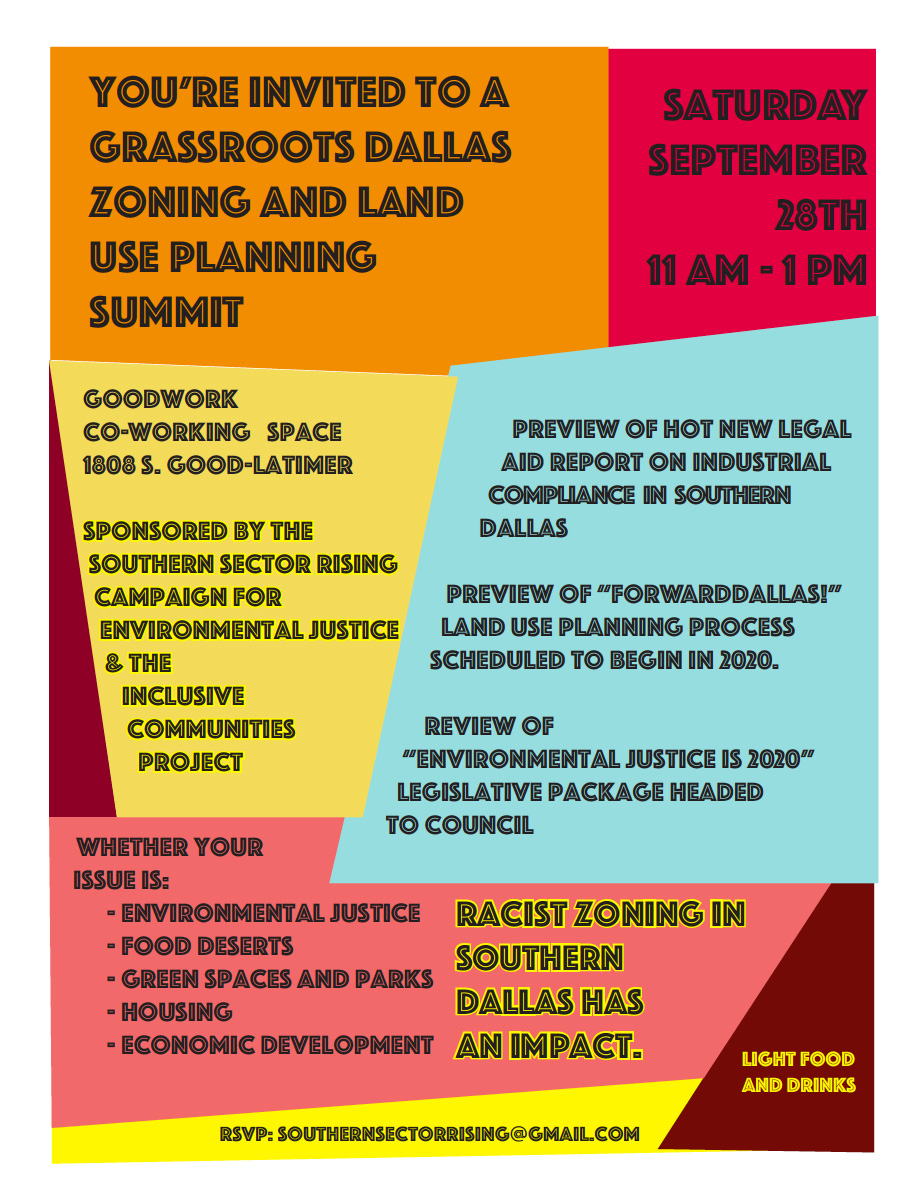 Communities Project isn’t waiting however.  We’ve already met with residents’ groups in the Floral Farms and Fruitdale neighborhoods to begin a grassroots planning process. Because of their preparation, these groups will be able to show up to the City meetings with their own plans already developed and ready to be approved. More online meetings are being scheduled for other neighborhoods.

No group has used the “forwardDallas” process to overhaul Dallas zoning in such a comprehensive way. No coordinated effort has ever been focused on this mission. Like so many projects Downwinders takes on, its a “first.” But it’s a chance to make fundamental Change.

This obsolete pattern of “redlining” and segregation lives on in a legacy of racist zoning that still drives polluters to Southern Dallas and along the Trinity River Corridor. Most of the land set aside for heavy industry in Dallas is still south of the River – in predominantly Black and Brown neighborhoods like West Dallas and Joppa.

To make sure Southern Dallas doesn’t remain the City’s dumping ground you have to change the zoning that controls what can go where and next to whom.