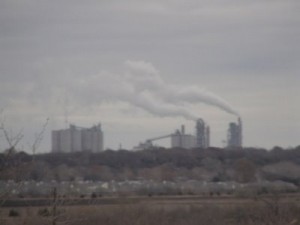 There's a public meeting hosted by TCEQ at 7pm tonight concerning the new permit for Holcim's Midlothian cement plant. It's taking place at the Midlothian Conference Center, at 1 community Center Road, right off Hwy 287. Here's a map if you need one.

This is your only chance to ask questions and raise concerns about Holcim's new permit, or any other aspect of Holcim operations in a public forum in 2014.

Remember that Holcim's pollution contributes to higher smog levels as far north as Denton and Wise Counties. Along with TXI and Ash Grove, its plumes have been associated with higher childhood asthmarates in southeast Tarrant County.

Holcim is also still the only Midlothain cement plant still blasting for rock. The others use machinery to mine limestone, Holcim uses ammonium nitrate, the same explosives that caused the West, Texas catastrophe.

The good news is that Holcim has decided to install Selective Catalytic Reduction (SCR) pollution control on one of their two large cement kilns. That's what the new permit mostly is about. Although well-known for reducing smog-forming Nitrogen Oxide (NOx) in the European cement industry, Holcim is using it to reduce Total Hydrocarbons – a category of pollutionthat includes toluene, benzene, and xylene.

You can read about how important a victory SCR is for all DFW breathers here. It's been a 15 year effort. Holcim's decision to install SCR should be celebrated.

But important questions remain about when the SCR unit will become operational and how reductions in airpollution like NOx will be tracked by the company.

SCR is only being installed on one of two Holcim kilns in Midlothian. The other kiln is getting a "Regenerative Thermal Oxidizer" – the equivalent of a flare on a gas well – to burn off its total Hydrocarbons.

Because they're combustion-based, RTOs increase NOx pollution. How much, and how Holcim can catch that increase before it goes up the stack is alsothe subject of the permit.

The public meeting on Monday is not a hearing. But it is the only public forum where citizens can thank Holcim for finally installing SCR, as well as express their concerns and ask questions about the permit.

We know it's a busy time of year, and it's the day before Election Day, but do your lungs a favor and attend a meeting about a permit that can affect them for good or bad.