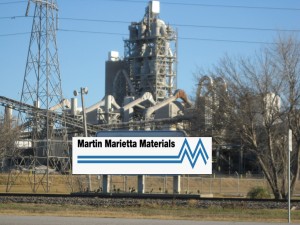 This year, that kiln, along with the three other obsolete wet kilns at TXI's Midltohian plant that burned hazardous waste for two decades, is due to be demolished, following the company's corporate demise at the hands of the grandson of its founder. And then, the last remnants of the old TXI will be gone for good.

What does the change in ownership mean for breathers in North Texas?

If that's true, the new owners will act as placeholders of the status quo, not investing in big new capital projects, but also trying not to lose any of the value of the assets they now have by running them into the ground. Martin probably won't look favorably upon attempts to bring smog-reducing modern Selective Catalytic Reduction (SCR) technology to TXI via the next clean air plant for DFW, now due in June of 2015. Not only would the plant be among the first to adopt the technology in the US, (even though SCR has been successfully used in European cement kilns for over a decade now), but it would mean new capital investment and a new learning curve.

Swiss-based Holcim Cement, with a huge plant already in Midlothian and a large manufacturing footprint in the US, was rumored to be one of TXI's suitors before the sale was announced. It could be that Holcim, or another well-established player in the cement industry winds up with the actual kilns in the next year. That could complicate the plant's participation in the new clean air in other ways even if new owners are not as intimidated by the demand for new technology

Politically, it'll be interesting to see which Austin lawyers and lobbyists get the business of the new company. Martin-Marietta owns over 40 facilities in Texas already and is represented by it's own crew. Will TXI's law firm and lobbyists survive the buy-out? There are industry lobbyists that will keep the ball rolling no matter what – the Chemical Council, the Aggregate Association, etc. But in Austin, it's all about relationships, and it's hard to say yet how this Martin's buying of TXI changes any of them.

Maybe the place TXI's absence will be felt the most in in the corridors of power in DFW. TXI was proudly headquartered in Dallas. Ralph Rogers, TXI's founder and patriarch was a driving force in local philanthropy, giving millions to public broadcasting (KERA is housed is housed in the "Ralph Rogers Communications Center") and other non-profits. Besides feeing like he was entitled to use PBS's iconic Big Bird to sell the benefits of burning hazardous waste in 50-year-old cement kilns, the non-profit giving Rogers was responsible for made him a known figure on the Dallas Charitable circuit. In turn, this made it hard for the Powers That Be to criticize Roger's company when it became a waste incinerator.

Locally, the establishment played golf with the Rogers' or attended black tie dinners with them, or helped them lift the oversized scissors at ribbon-cutting ceremonies. But that was old Dallas. Hardly of those relationships survived past Ralph Rogers' death in 1997. His son, Robert, failed to maintain that same high-profile locally, and his grandson Jamie seems totally disinterested in the family business or its legacy of charitable giving.

Now, the move of company headquarters from Dallas to Raleigh will complete the disappearance of the once-mighty TXI on the local scene. They'll still be company representatives at functions, but it won't be the guy who can write the big checks, or who the Mayor had a splendid time with last Saturday at the Club.

The company's local political influence has forever been diminished, and that's a good thing for citizens who are fighting the company to get modern controls like SCR. Now, it's just one more corporate entity with a presence in North Texas. A presence that makes it the single largest air polluter in the region. That's the way Dallas and other downwind cities should have viewed the company all along.