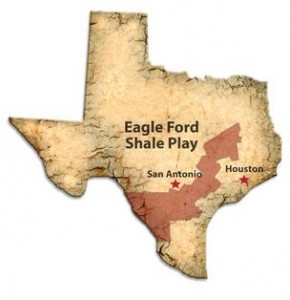 For decades DFW was the only major urban area in Texas to have its air quality challenged by the cement industry. Repeated modeling over the course of the last several local air plans showed that the concentration of the plumes from three huge cement plants in Midlothian could increase downwind ozone levels significantly. Part of this is the voluminous emissions produced by the kilns and part of it's location, location, location –  the close proximity of these cement plants to the center of DFW. So much so that you can see their smokestacks from I-20 in Grand Prairie and Arlington.

Then beginning in 2006 or so, the area's air shed began to be reshaped by the presence of gas production facilities as the Barnett Shale was opened up to exploitation from fracking, a process freshly exempted from just about every federal environmental regulation with passage of the 2005 Energy Act. But unlike large "stationary sources" like cement plants, these gas facilities were spread out over a large area, right in the middle of the Metromess, and were except from the "off-set" requirements of other large polluters. Even though their collective emissions were as large or larger than any other single industrial source, their decentralization allowed their operators to release their tons of pollution into the air without ever having to consider its impact on local smog levels.

That one-two punch of local industrial pollution flies in the face of the office park business image of DFW. Houston has traditionally been the city where industry has made it harder to breathe. In North Texas, it's supposed to be all about cars and trucks. But those cars and trucks lay a mostly uniform blanket of ozone over the entire area, whereas the gas production facilities and the cement plants are concentrated fire hoses of smog-forming pollution that can impact specific monitors over and over again.

And all of this has taken place during a time when the official federal ozone standard has been a relatively high 85 parts per billion. Beginning in 2015, the standard becomes 75 ppb, and it might drop to 65-70 by 2020.

Texas cities like Austin and San Antonio have had little problem complying with the higher standard, but now face obstacles to coming in under the wire of a 75 ppb rule.

For one thing, the only other large concentration of cement plants in Texas besides Midlothian is located along the I-35 corridor from Buda, south of Austin to North San Antonio. Because prevailing winds have often carried the pollution from these plants away from central Austin or San Antonio, they haven't been seen as much of a threat. But now urbanization is increasingly creeping westward into the downwind path of these plumes, adding some heft to the emissions and combining with them to elevate ozone levels.

And then there's the Eagle Ford Shale gas play, the new Wild West of fracking in Texas, taking place directly upwind of central San Antonio. Unlike the urban drilling in the Barnett Shale, most of the activity in the Eagle Ford is taking place in unincorporated parts of South Texas counties. There haven't been any reliable emissions inventory of the pollution coming out of he Eagle Ford, but it's considerable. Anecdotally, there seems to be a lot of flaring that DFW never saw. Because of the amount of production taking place, as well as its location upwind during the summer "Ozone Season," Central Texas is starting to sweat about its impact on its own air quality.

That concern has prompted a regional modeling exercise which is supposed to determine how much, if any, impact the drilling in the Eagle Ford is having on the Alamo City's air. Back in July, we reported that the preliminary numbers of this study showed that gas production was capable raising local ozone levels by as much as 3 to 7 parts per billion by 2018 – exactly when all Texas cities must be in compliance with the new 75 ppb standard.

Maybe 3-7 ppb doesn't seem like much. And it isn't, unless you're already at or above the new 75 ppb standard and that amount will put and keep you over that red line. Like San Antonio in 2013. The July headline in the San Antonio paper was unambiguous: "Eagle Ford drilling is polluting San Antonio's air"

But it looks like someone at the San Antonio Council of Governments is taking a page from DFW and TCEQ officials and downplaying those preliminary numbers from last summer.

Previous studies show that emissions of ozone-forming chemicals from sources other than drilling have dropped significantly since 2007 despite the city's population growth, said Steven Smeltzer, AACOG's environmental manager. Smeltzer attributes the improvement to new vehicle standards and voluntary reductions by local industries.

Preliminary numbers from the AACOG study also indicate that much of the problem lies in the Eagle Ford. InsideClimate News obtained a copy of the data, which have not been made public. The data show that during the months when San Antonio experiences the highest ozone levels—April through October—oil and gas development produced about half the amount of ozone-forming emissions per day as all other industrial sources combined.

Bella said the data came from an early version of the study that wasn't as thorough as later drafts. "My sense is they're really not worth using…They're not solid numbers."

He declined to comment on whether the numbers are close to the latest estimates. What matters isn't the number, he said, but the process behind the study. If the science isn't right, then it's "garbage in, garbage out."

Yeah, we know. Believe it or not, citizens had to literally force the TCEQ to consider the effect of the pollution from Midlothian cement plants before they discovered, wow, they really do have an impact. Likewise, it took Dr. Al Armendariz's 2009 study of Barnett Shale pollution for the state to even consider local gas sources might be a contributing factor to the DFW smog problem – although TCEQ officials are still doing their best to deny it. The largest purveyor of junk science in Texas is the Texas Commission on Environmental Quality. Remember that in 2012, TCEQ's computer model told us to expect the lowest level of smog ever recorded in DFW. Instead we got the highest levels recorded since 2008 or so. So yeah, GIGO.

That's why it's disappointing to see the Council of Government official try to use the same strategy with this new study – whose final edits will be made by TCEQ, not an independent entity. Just like with TCEQ's Wednesday's ruling against 7000 Dallas County doctors that said there's no link between smog and public health, Rick Perry's agency can't afford to admit the state's gas plays are making the state's air illegal and unsafe.

Like San Antonio, almost every other category of pollution in DFW has decreased over the last 6 years – except gas industry pollution. It's the one category of emissions that's grown and grown and grown – to the point where the state itself admitted that the industry was releasing more smog-forming Volatile Organic Compounds than all the trucks and cars on the road in North Texas. As DFW continues to linger in violation of an almost 20-year old obsolete ozone standard, it's the gas industry that is the logical culprit for the backsliding. It's the one variable that's going the opposite direction as all the others. But despite the overwhelming evidence to the contary TCEQ is busy defending the Shale from any charges that it has the least bit of impact on area smog, even to the point of ignoring basic air modeling chemistry.

San Antonio officials may want to deny the link between the Eagle Ford and smog in their city, may want to down play it, and they'll have plenty of rhetorical help from Austin. But when it comes to TCEQ rhetoric versus the real world, the monitors in the field tell the tale. Negligence doesn't make your air cleaner.