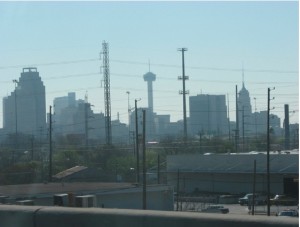 According to a new study from the Texas Commission on Environmental Quality and the Alamo Area Council of Governments, air pollution from the Eagle Ford gas play in South Texas will increase smog levels in San Antonio by 3 to 7 parts ber billion by 2018, the year the nation's metro areas are supposed to be in compliance with a new tougher federal standard.

Since it relied on TCEQ engineers and TCEQ computer models, one can safely assume this study is underestimating the problem of this pollution.

On the otheFrom the beginning of the fracking boom, it's been the contention of Rick Perry's TCEQ that gas industry pollution from the Barnett Shale has no significant effect on DFW smog. "All the wells are west of central DFW"  goes the rationale, even as Dallas debates new drilling and refinery permits. A lot of us, including atmospheric scientists who study this sort of thing, beleive differently.

For two years in a row, air quality in DFW has gotten worse, not better, They've been more violations and they've moved further east. While 2013 has the potential to be the best year for smog in DFW this decade, it may have much more to do with the cooler, wetter weather than any large decreases in pollution inventories. However, given the impacts outlined