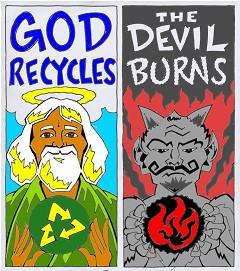 For the first time in 30 years recycling rates in the UK are going down and a influx of incineration capacity is being blamed.

New European Union directives favoring waste burning over recycling are now spreading throughout Great Britain and having a big impact. Landfill disposal has gone down by almost 50% in just over a decade. Meanwhile there are now 39 incineration plants in the UK that have either been built are under construction or are at the planning stage – so many that there are now concerns about overcapacity. Moreover, every time an incinerator is chosen over other options, it institutionalizes the economics of incineration.

Experts said the use of incinerators had consequences for recycling as local authorities were forced to divert waste to feed the plants. "The choice to invest in thermal treatment can hold back recycling efforts," Adam Baddeley, principal consultant at Eunomia, said. "At one level, the money invested in such plant simply isn't available to put into building recycling plants or collection infrastructure. And once you've built an incinerator or gasifier, there's a strong incentive to keep it fed with waste, even if that means keeping on collecting as 'black bag' rubbish, material that would be economically practicable to collect separately for recycling."

Because Texas is still home to relatively cheap and abundant land, it hasn't seen the wave of incinerators that swallowed up the budgets of East Coast and Midwestern towns throughout the 1980's and 90's. But that may be about to change with increased urbanization, the desire of cities to profit from their garbage somehow, and new regs that are written to encourage incineration of "biofuels" that can include waste. Some local observers think it's only a mater of time before a large garbage incinerator is proposed for the Dallas area.

But why wait when you've got three large cement plants down the road?

Hazardous waste was burned in two out of the three Midlothian cement plants for decades and now all three are burning different kinds of solid wastes, including tires, car parts, and "non-recyclable" plastics. They're the front line in the March of Incineration in North Texas.