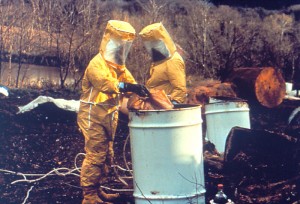 The President of the company at the center of the current Dallas drilling controversy was Vice-President and General Counsel of a hazardous waste disposal firm that was forced to close its California plant site after a long history of environmental violations.

Thomas Blanton is President of Keystone, the parent company of Trinity East, which is applying to the City of Dallas for three gas drilling and production permits in the Trinity River flood plain near Irving. But in the 1990’s and early years of this century, he was a leading officer of the Board of Directors of US Liquids, a large broker of hazardous wastes that had its California facility ordered shut by the state’s California Department of Toxic Substances Control.

From 1999 to 2003, US Liquids owned Romic Environmental Technologies Corporation. Romic’s Bay Area operation received hazardous wastes from throughout the country, “blended” them on-site, and then shipped the toxic soup for use as “fuel” for cement plants like the TXI kilns in Midlothian.

Records show that from 1999 to 2004, Romic was slapped with 28 separate environmental violations by the State of California, which resulted in penalties of $849,500. The California Occupational Safety and Health Administration (CalOSHA), discovered 57 violations at the plant from 1988 to 2004, totaling another $163,360 in fines.

Romic closed in 2007 on orders from the state of California as part of a legal settlement stemming from a series of environmental violations. The state and EPA ordered a clean up and closure of the facility after extensive soil and ground water contamination was discovered over most of the site. According to the EPA, the contamination is primarily attributed to the spills, overflows, flooding events, and other accidental releases around the “central process area.” The primary contaminants were volatile organic compounds such as trichloroethene (TCE), a solvent used to clean metal parts. Toxins migrated as much as 80 feet below ground that borders San Francisco Bay tidal marshes.

All three sites that Blanton’s company wants to drill on are located in the Trinity River’s 100-year flood plain; two are also on City of Dallas park land. Opponents have warned about probable contamination from surface spills, which a 2011 UT study concluded were more frequent with fracking than conventional drilling.

It was recently disclosed that a Trinity East sister company experienced a casing failure at an Irving gas well it tried to drill in 2009, although the extent of any environmental damage caused by the incident remains unknown.

“Does Dallas really want hand over its park land to a businessman who has a history of contaminating and threatening soil and water resources?” asked Gary Stuard, Chair of Downwinders at Risk, a local DFW clean air group that’s been battling the Trinity East permits.

After denying Trinity East’s permits once last December, the City Plan Commission is scheduled to vote a second time on them at its meeting on Thursday afternoon.

Stuard was critical of the lack of due diligence city staff had performed on Trinity East and its owners and said this new information was another example of residents doing the job themselves.  “There’s never been a review of the company’s track record by the City. It had gone completely unexamined until Dallas residents took it upon themselves to do the research. What else don’t we know because the City isn’t doing a routine background check?”

Back in California, the first phase of the EPA-ordered clean-up at the Romic site ended in 2010 with clean-up of surface and above ground messes.  A second phase is addressing the remediation of below surface soil and groundwater contamination. The estimated cost for closure and cleanup of the facility is $2.5 million.