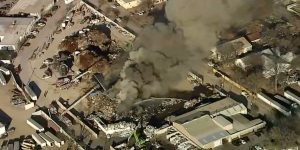 Move along. Nothing to be alarmed about. We asked the manager.

Back on December 11th, there was a serious fire at the “Sunshine Recycling” facility in West Dallas, aka, another West Dallas scrap and junk yard. Beginning at around 3 in the afternoon and continuing to burn overnight, it produced huge clouds of dark thick smoke that covered whole blocks and could be seen for miles on its way toward Irving. There were still “hotspots” requiring attention the morning after, 20 or more hours after ignition.

A Dallas Fire Department spokesperson reported cars, appliances and “other scrap” were burning with intensity.

So if you lived in the neighborhood, you might have been relieved to see your local city council member post on his FaceBook page that “The Fire Dept has conducted testing and there is no hazardous materials burning.”

You might have been reassured to hear the authorities claim, and news media report, that a Dallas Fire Department Hazardous Materials Team was on site.

But none of that was true.

After a lengthy Open Records Act request by Downwinders, many phone calls and emails, we can now piece together what really happened. The Dallas Fire Department never showed up with its Hazardous Mat unit. It never did any air monitoring at the fire. It did no testing.

Instead, at some point that afternoon, as she looked out her window at FountainPlace downtown and saw the fire’s plume wafting only a few miles away, Superfund Division Chief Susan Webster at the Regional EPA office called the Texas Commission of Environmental Quality’s regional office in Fort Worth and asked the state to send someone over to monitor the fire’s smoke. Whether she did this knowing the Dallas Fire Department had already decided not to do any air monitoring itself, or whether is was double-checking is not known. Ms. Webster wouldn’t return our phone calls. 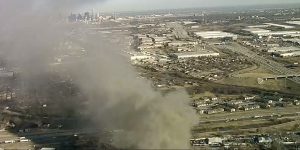 Was seeing this plume from her downtown office building what caused EPA’s Susan Webster to request TCEQ monitoring?

At around 4:30 pm Dallas Fire Department dispatch notes a call from “PCAQ” asking whether the City’s own Haz Mat team was on site and whether any air monitoring was going on. Ted Padgett, a Chief with the DFD, says that “PQAC” was really the “TCEQ” but was misunderstood on the phone.

Told no testing was going on, the TCEQ regional office in Fort Worth begins to assemble a site team and get their own monitoring equipment packed to go – hand held portable monitors.

This is the TCEQ side of that call: “TCEQ staff confirmed, via media coverage and contact with the Dallas Office of Emergency Management (OEM), that a fire was occurring at a scrap metal yard in Dallas. However, staff could not confirm the status of the fire nor what specifically was burning.” Emergency response in the Information Age.

The TCEQ monitoring team shows up in West Dallas at 6 pm – three hours after the fire has started.

Once there, the TCEQ monitoring team  has the capabilities to monitor two pollutants: Particulate Matter (PM) and Volatile Organic Chemicals, or VOCs. They took one background sample away from the fire and four samples of about five minutes apiece downwind of the smoke.

The team says it doesn’t find significant VOCs in the air, but of course it’s possible those kinds of highly flammable materials like Benzene (via gas lines and tanks in the burning cars) had already been burned off.  The category of VOCs is broad and covers a lot of sins, but it’s not the definitive list of “toxic chemicals” by a long shot. We know burning plastic will produce lots more Dioxins and Furans – the stuff that made Agent Orange so deadly. We know PM pollution can carry lots of bits of metals and other chemicals on them.

We know this because there was a very similar, if slightly more bureaucratic 21-year continuous incineration of car parts, plastics, used oil, dashboards, and scrap at the TXI cement plant in Midlothian, just south of the Tarrant/Dallas County lines. When you look at the before and after volumes of weird laboratory-induced chemical names you can’t really pronounce coming out of the stacks at tests controlled by the company, there’s no question burning junk fills the air full of junk too.

But it you don’t look for it, you won’t find it.

TCEQ was only looking for two kinds of pollutants that night, so it didn’t find anything else. It didn’t even bother to collect PM samples for “chemical characterization”  – that is, determine what, if any, toxic baggage like lead or arsenic the PM particles were allowing to hitch a ride on them during the fire.  Without such samples, it’s impossible to say the plume was not “toxic” in the “Really-Bad-For-You,” traditional regulatory meaning of that term.

Then there’s what the TCEQ team did find.

Two other samples, one taken way north along Bernal And Hammerly, and  further south down Westmoreland at Canyon Bluff  showed “background” levels of PM at 14 ppb and 18 ppb respectively.

The EPA annual standard for PM exposure is 12 ppb, the daily standard is 35 ppb. The results from two of the four samples TCEQ took were three and five times the daily standard. That’s “toxic” in the “Science-Says-That-Stuff-Will-Kill-You” way.

The TCEQ inspectors left after only about an hour. No other monitoring took place for the duration of the fire, which was still going the next morning. So out of approximately 20 hours the incident lasted, only one was monitored.

TCEQ did note that the wind was out of the West at 10 mph and that “Potentially Impacted Receptors” included residences and businesses between Highway 12 and I-30.

There’s no record of the Dallas Fire Department, or anyone at Dallas City Hall, asking for the TCEQ’s monitoring results and TCEQ never sent them to anyone there. It wasn’t until Downwinders requested the results through an Open Records Request that any member of the public had seen the full record of what was done.

But some West Dallas residents complained about health effects from the fire to State Senator Royce West. One email the Senator got related how the fire had caused “my throat to become scratchy, coughing …. The smoke was so thick it hovered over all of West Dallas. The smell was horrific, very strong & lingering. You could smell it from loop 12 & all over West Dallas & I’m sure the lingering included other local surrounding areas in our city. The fire department said by it being cold outside, it causes the materials burning & the smoke in the air to continue to stay low where it affects us when breathing.“

Senator West’s office wrote a letter to the TCEQ regional office asking about what they’d found when they did their air monitoring. Here’s the reply he got:

“Smoke is a complex mixture of gases and fine particles. While the main pollutant of concern in smoke is the particulate matter, smoke may also contain other pollutants that are dependent on the product that is burnt, the moisture content of the product, and the fire temperature. Particles from smoke are often very small in size and have diameters that are 2.5 micrometers and smaller (PM 2.5). These particles are respiratory and eye irritants. Short-term exposures (hours-weeks) to these particles can cause headaches, respiratory (e.g., runny nose, scratchy throat, irritated sinuses, and bronchitis) and eye irritation (e.g., burning eyes). However, these symptoms typically disappear quickly once the person gets out of the smoke. Exposures to high concentrations of these particles can cause persistent cough, phlegm, wheezing, and difficulty breathing. While some people are more susceptible to the adverse health effects of smoke, particles from smoke can also cause respiratory symptoms, transient reductions in lung function and pulmonary inflammation in healthy adults. Children, older adults, and people with pre-existing heart or lung disease are more susceptible to lower levels of smoke than healthy people…(monitored) PM ranged from 0-180 ppb…..”

No mention of the scientific consensus that even short term exposure to low levels of PM can cause a host of permanent heath injuries, including brain and learning disorders, immune damage, and life-long respiratory ailments.  No mention that fully half the samples taken by TCEQ were over 100 ppb and exceeded the 24-hour EPA standard for that specific pollutant.  In fact, TCEQ says, all of your problems should disappear once you get out of the smoke – or your house, if the smoke from the toxic fire down the street is making it unlivable.

There’s an email from a TCEQ Special Assistant to the Deputy Director in Austin that asks:  “…is there any way to put the highlighted PM detection in context….is this the level we would normally expect to find in smoke; at what level would we take action, can hand-held equipment quantify, etc?

She didn’t get a reply to those questions that we saw. Probably because no one at the Austin or Fort Worth TCEQ offices really knew the answers, or didn’t want to write them down and send them to a State Senator.

TCEQ was able to tell the Senator West that, despite plastics and metals and other materials on-site capable of producing toxic smoke, there were “no hazardous chemicals” on-site or involved in the fire.

How did it know? TCEQ inspectors asked the manager of the facility. There was no independent inspection.

And that, Dear Citizens, is how you’re protected by potentially toxic fires in Dallas, Texas. Feel safer? 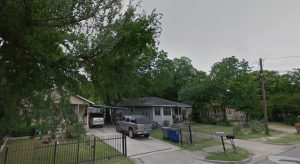 Homes along Singleton probably exposed to some of the worst fallout of the December 11th fire.

Along with the high PM levels our PM Committee found in Joppa, this incident is another case study of why Dallas should have its own 24/7/365 dense network of air quality monitors – monitors that will be there when such a fire starts, as well as when it’s finally extinguished. Monitors who won’t make the value judgement about when the A Team should be called out. Because along with all the other questions this response poses you have to ask yourself if something like this happened in Preston Hollow or Uptown, would the Dallas Fire Department have still shown-up without its hazardous materials crew in tow?

This incident is Exhibit A why Dallas should also be incorporating public health into emergency responses. Why doesn’t the Fire Department have access to its own toxicologist or public health expert who could tell them what to sample for, where to sample, and whether the fire really posed any concern to neighbors or not? Why isn’t the automatic response to a fire like this to send out its own hazardous materials team instead of outsourcing it to TCEQ, 30 minutes away in Fort Worth?

December 11th allows us to peak behind the the modern post 9/11 facades of “Public Safety” and “Emergency Response” we all take for granted and see what a decrepit cynical reality is in charge of assuring us that “there’s no reason to be concerned.” That’s why we need a new reality.