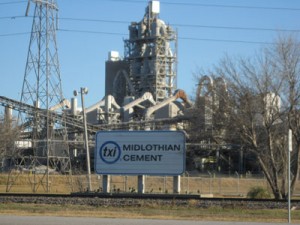 Last Wednesday TXI stock didn't do as well as Wall Street thought it should for the quarter and the result was about a 10% drop in value over one day's trading. On a Thursday conference call, CEO Mel Brekhus defended the company's prospects, including the opening of its new Central Texas plant, saying it "was the most successful of any he had been involved with in his career." We imagine that's right since the only other plant the company has built recently was Kiln #5 in Midlothian which faced opposition from Downwinders and others in the early part of the last decade.

But most intriguing from DFW residents' point of view was the hint that Brekhus casually dropped toward the end of the call that the company was thinking about "increasing capacity" in North Texas. You know what that's code for – a new cement kiln.

Midlothian has been home to the nation's largest concentration of cement manufacturing for a long time, but such an addition would solidify its position for decades to come. That's because these days kilns come in one size – very, very large. A new TXI kiln would be massive in all respects. Air pollution would go up considerably, possibly canceling out some gains that have been made by the shutting down of the seven older wet Midlothian kilns that were ground zero for waste-burning from 1986 to 2008. Particulate Matter, smog-forming pollution and more exotic poisons like Dioxins would increase substantially.

Moreover, TXI might be looking for new ways to make money besides making cement – just like they did when they turned their kilns into hazardous waste incinerators for profit. Around the world the cement industry is focusing a lot of effort into becoming waste incinerators for municipal solid wastes, medical wastes and "unrecyclable plastics." Just like they did when they were burning hazardous waste, they charge customers for the right to burn their garbage. TXI recently expanded their list of fuels to include car parts and plastics. Might a new kiln increase the need to develop even larger markets for waste to burn?

It could be PR talk for the investors or reflect real corporate thinking at TXI headquarters. As part of their planning, executives would be advised to also think about the opposition to such a plant now. Midlothian is a different place than it was even 13 years ago, much less 25. People who've moved there recently might not want to see a new source of air pollution, especially one devoted to being a garbage burner. It's not quite the company town it was. And instead of facing a fledgling group, they'd be up against an organization that knows how to win the war. Stay tuned. 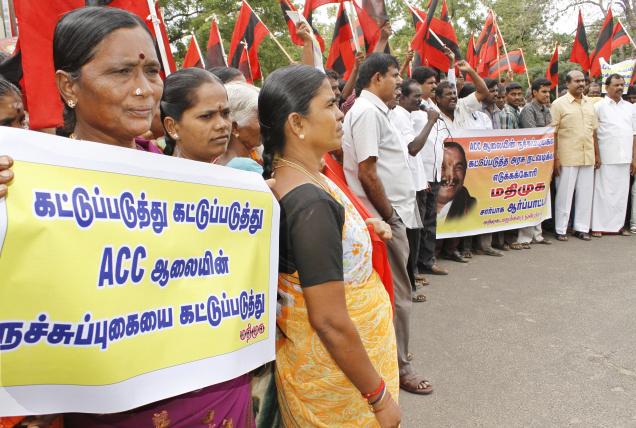 This time in India instead of Utah or South Carolina.

In Coimbatore, plastic and leather wastes stockpiled waiting to be burned as "fuel" at the Madukkarai cement works spontaneously combusted in a three hour fire that did not result in any known injuries at the plant.

However, thick columns of black smoke poured into the sky and that stuff, as the late Dr. Commoner would note, has to go somewhere. A lot of it will no doubt dind its way into the lungs of downwind residents. More than 200 tons of waste was gutted in the fire out of at total twice as large.

Despite local fire officials urging the cement plant to enclose the waste for some time, it had not done so. That is an apparent violation of state law. And readers, will it surprise you in the least to learn that the plant was already a longtime source of complaints from local residents?

Meanwhile the Fire and Rescue Services Department officials pointed out that storing combustible waste materials outside the plant without adequate protection was in violation of the Tamil Nadu fire service rule of 1990.

"It is a violation of section 250 of Tamil Nadu Fire Service Rules 1990 and we will issue a notice to the factory and will give them 15 days to store the waste materials inside a roofed structure with protective walls," said Subramanian.

Residents have been protesting against the cement factory for a long time and have submitted numerous petitions to the district administration. They claimed that the dust and smoke from the factory was causing major health complications, especially for senior citizens and children.

"We have raised the issue on numerous occasions and also submitted petitions to the district administration but till now no action has been taken," said C Palaniswamy, a resident of Kurumbapalayam.

There is a premeditated and orchestrated campaign by the cement industry to allow kilns to become garbage burners of all kinds of wastes. We've seen it manifest itself locally in Midlothian with the TXI permit that allows that plant to burn car parts and plastic wastes.

The more kilns that become gargabe burners, the more garbage of dubious content will pile up at kilns, the more often that garbage causes a fire. We've reported on three just since the summer alone. Being downind of an uncontrolled garbage fire isn't one of the talking points  the industry boasts about when it's trying to sell kilns as the industrial equivalent of Kitchen disposals, but it's looking more like a standard feature rather than an option.