After a year of excuses, a determined group of women and their supporters shamed the City into finally taking action to close down the worst environmental health and justice crisis in Dallas. 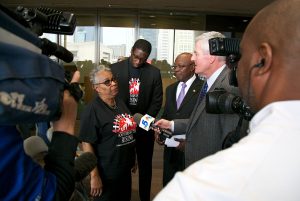 When the collapse came, it came quickly.

Only a week before, the official party line from City Hall was that the self-described “recycler” had all the permits it needed. Staff said critics’ description of Blue Star’s operation as an illegal dumping ground was wrong. It had “a right to be there.”

Now there was a new coalition of frustrated Southern Dallas residents and Old School Icons like Peter Johnson, Luis Sepulveda and John Fullenwider staging an emotionally-charged news conference with chants of “Shame on Dallas” ringing loudly up and down the corridors of City Hall. Now there was a publicly-leaked report with incriminating evidence of official wrongdoing. Now there were swarms of cameras and reporters hanging on the every word of a middle-aged, middle-class, horse-loving DART employee who had been ignored for such a long time. 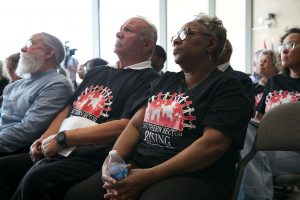 Led by Marsha Jackson and her Choate Steet neighbors, Temeckia Durrough and Miriam Fields of the Joppa Freedman Town Association and Olinka Green from the Highland Hills Community Action Committee, with Stephanie Timko as media czarina, the Southern Sector Rising Campaign for Environmental Justice did more than just win a huge victory for an much-abused part of Dallas.  It gave Southern Dallas residents a new model for effectively changing their circumstances.

An ad-hoc group that hadn’t even existed in February had the temerity to put City Hall on trial in its own lobby for Big D’s most spectacular municipal act of environmental racism in years. And it wasn’t even a fair fight. 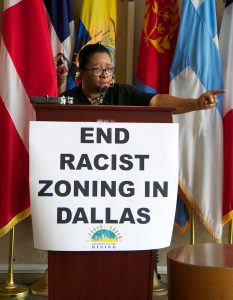 This is how bad it was: Blue Star’s mocking of the law was too much even for Gregg Abbott’s Texas Commission on Environmental Quality. Or the City of Dallas.

So long before the last speaker spoke in the Flag Room, news came that the City had pulled the Certificate of Occupancy for the largest of the two Blue Star tracts, something it had previously said wasn’t possible. Then it announced it was taking the company to court the next day to get an emergency Temporary Restraining Order to close Blue Star down.

That City staff could so shamelessly pull off such a dramatic flip flop over a matter of a few hours is testimony to both the fury fueling the Campaign, and the overwhelming evidence that Blue Star and its government enablers had allowed a full-blown illegal dump to grow… and grow…and grow. The only thing missing from the turnaround was an apology and acknowledgement to the women that had forced City Hall’s hand.

In Thursday’s hearing on the Restraining Order, the City of Dallas cited a number of missing municipal and state permits it now said Blue Star needed, including a Special Use Permit, an air quality permit, and a permit for storage in the flood plain – none of which the City had demanded when Blue Star had opened for business a year earlier. Despite the lack of these permits the City was now saying were essential, it had kept telling reporters, Council Members, and residents alike that Blue Star was a legal business right up until the time of the news conference.

It wasn’t. Ever. But it took a group of frustrated Southern Dallas residents to expose that lie. 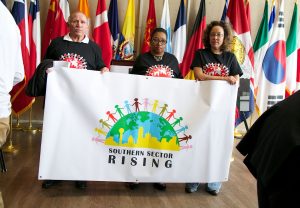 Of course in the hearing itself the heretofore lack of official city concern about these lacking permits was perturbing in the extreme for the attorney representing Blue Star, who said City Hall had already signed-off on its operations.

“The City told my client there were NO air quality problems,“ he protested to the judge. That was undoubtedly a true statement. But that conclusion was rendered before a brigade of angry residents showed up at City Hall demanding Dallas enforce the law.

Now, presto-chango, the City was emerging out of its dilapidated telephone booth with its moldy Toxic Avenger costume on and finding plenty of air quality problems, albeit in a anecdotal, non-quantifiable, way.

Because despite being “very concerned” about air pollution from Blue Star, the City of Dallas never monitored air quality from the facility before it got to court. Neither did the state. Only Downwinders at Risk, plugging-in one of our own portable PM monitors on the top of Marsha Jackson’s window unit for days at a time, captured any credible scientific evidence of air pollution harms.

Those results were released at the March 20th news conference and showed levels of Particulate Matter pollution that UNT’s Dr. Tate Barrett concluded “poses a significant health risk to the residents.” 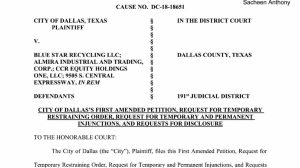 But in court, the City didn’t even mention those EPA-calibrated results.

For the first time in memory it was the regulators using only their senses to call for a crackdown – what they saw and heard and smelled at Blue Star’s site – and citizens showing up with Real Science.

Lacking any monitoring data of their own, Dallas city attorneys sounded like countless over-matched  and overwhelmed residents from past TCEQ hearings, pleading with the judge to accept their word that the air pollution was so darn obvious…if not directly quantifiable because, well, no, we didn’t actually do any monitoring. We don’t know how to do that. 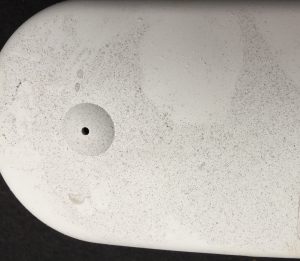 This lack of any data to back up its air pollution claims was one of the most embarrassing parts of the hearing for the City. One wonders when James McQuire and his Office Of Environmental Quality & (Rockefeller) Sustainability’s stubborn refusal to buy its own air monitors will eventually cost the City (and its residents) in court.

But every time the City’s case looked in trouble, Blue Star’s attorney dug a deeper hole. He wanted the judge to know “shingles make really good fill” and that the spring-fed creek that ran through the company’s site was merely “a drainage ditch” and asking, after all judge, what is the true and right definition of “combustible” under Texas law?

Everyone but the Blue Star attorney chuckled.

After 45 minutes, Judge Gina Slaughter had heard enough and ruled in favor of the Restraining order. It took effect March 22nd and runs until Midnight on April 3rd. 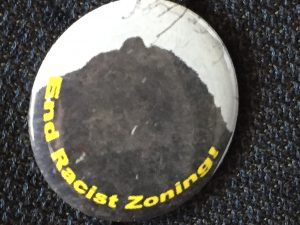 Before that happens, an 11 am Wednesday morning hearing will be held in the same courtroom to decide whether to extend the Temporary Order into a more permanent one. Word is that Blue Star was caught doing business during the last week when it wasn’t supposed to be on site at all. If true, it seems unlikely Blue Star will be granted a reprieve, despite the optimism displayed on the company’s website. “We fully expect to be open on Thursday April 4th, 2019″ it proclaims.

Not if Marsha Jackson, her friends in the Southern Sector Rising Campaign, and now their reluctant ally, The City of Dallas, get their way.