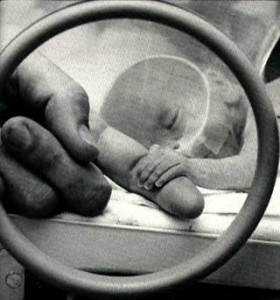 A new study being published in the November issue of Epidemiology concludes that even low levels of pollution from solid waste incinerators causes an increase in premature births downwind.

Italian researchers examined over 21,000 births to women living within four kilometers of one of eight solid waste incinerators operating in the Emilia-Romagna region.

"Each newborn was georeferenced and characterized by a specific level of exposure to incinerator emissions, categorized in quintiles of PM10, and other sources of pollution (NOx quartiles), evaluated by means of ADMS-Urban system dispersion models. We ran logistic regression models for each outcome, adjusting for exposure to other pollution sources and maternal covariates.

Now, you can reassure yourself that we have no single-purpose solid waste incinerators around these parts the way they do on he East Coast or Midwest, so we don't have to worry about this kind of threat. But that's not entirely accurate.

And, as it turns out, these cement kilns are expanding their lists of available "fuel" to include solid wastes, as well as coal – medical, municipal, and "hard to burn" plastics, as well as car parts, shingles and carpet remains. It's all part of the new wonderful world of commercial garbage burning. If the kilns happen to make some money in the process of turning themselves into under-regulated incinerators, well, all the better for their operators.

For example, and try not to throw up, in the Philippines, the local cement plant is marketing the burning of "Holcimables." What are "Holcimables" you ask? They're "plastics – styrofoam, sando bags, cellophanes and foil packs – textile and rubber." Yes, the same company that operates a cement kiln in North Texas is burning styrofoam in the name of environmental-friendliness in the Philippines. You can bet the Italian incinerators included in this new study were burning some of the same kinds of wastes with the same ingredients.

Burning stuff is bad, whether it's in an incinerator or a cement kiln. And industry is making it very hard  to tell the difference.