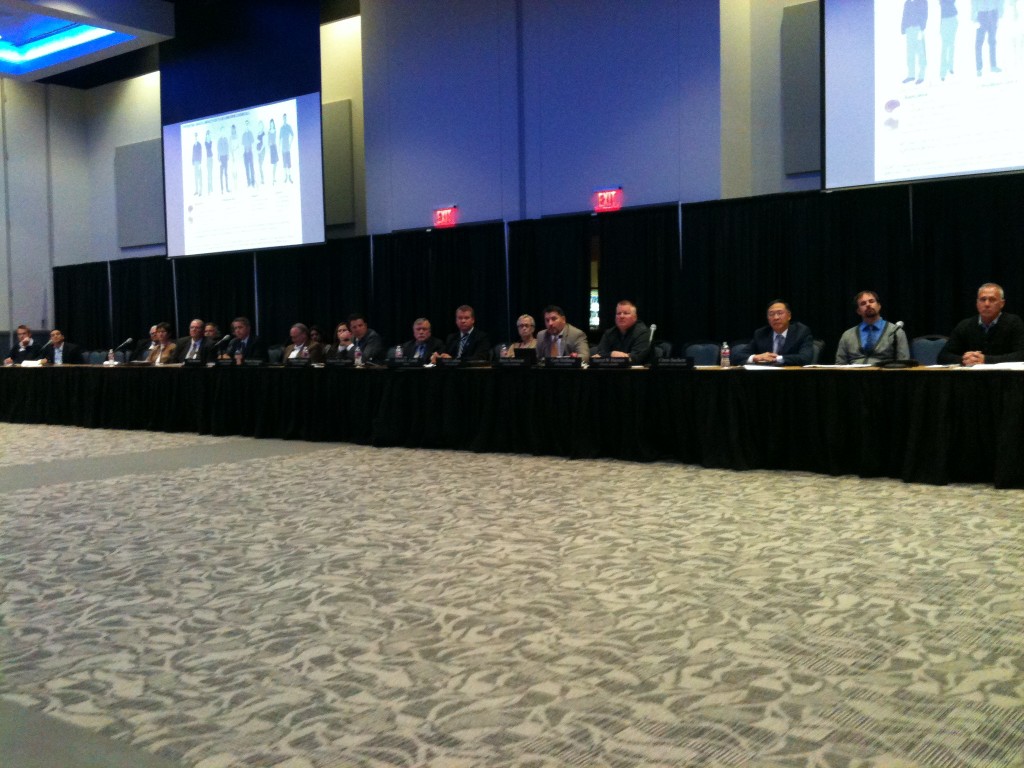 Combined, they projected just the right mix of competence, skepticism, and experience to combat the "Don't worry, be happy" approach of the Railroad Commission and Texas Commission on Environmental Quality presentations that preceded them in the agenda.

(By the way did you know, that according to Austin, the average response time of a TCEQ inspector responding to a complaint was only 5 hours? Downwinders at Risk is willing to pay $100 to the charity of the inspectors' choice if anyone out there has ever gotten a response that quickly. After almost 30 years of dealing with state environmental agencies, we can't recall a single instance where it took less than a day for an inspector to show up, even when the situation was "urgent.")

By putting the three residents in the same horseshoe as industry, state agencies, and itself, the Council elevated the status of the resident's group beyond anything it had enjoyed in previous rounds of jousting over drilling. Whether that leads to the kinds of substantial changes to the city's drilling ordinance the group is pursuing remains to be seen.

What was obvious after the formal presentations ended and a more informal question and answer period followed was the large disparity in monitoring and self-regulation within the industry. There were at least 10 or 12 gas operators sitting at the table during the event. Conspicuous by its absence was Eagleridge, the source of many complaints in Mansfield and of course, the company that ignited the Denton fracking vote controversy.

But Eagleridge's Chief Operating Officer Mark Grawe was present, in the back of the room, trying to keep a low profile. It didn't work. Let's just say when you get called on the carpet by Stephen Lindsey, the Mansfield Council member whose day job is the "Government Relations and Community Affairs Director" for gas industry giant Quicksilver, you know you're not going to have a good night. As the evening wore on, it was clear Eagleridge was being portrayed as the poor, white trash cousin of the more established players like XTO and Chesapeake. The company lacked the remote sensors, automatic cut-offs, and other kinds of precautions that the rest of the industry reps liked to brag about. By the end of a rigorous cross-examination of Grawe by the residents' group, there was an unacknowledged consensus that perhaps the floor for regulating existing wells needed to be raised in Mansfield so that moving target known as "industry best practices" was updated applied to all.

More ambiguous was the response to the residents' request for a 1500-foot setback to replace the current 600 feet requirement – with a variance that can decreases that distance to 300 feet. Some industry representatives and council members want to frame the problem in terms of incidents and accidents that can be fixed with better equipment, rather than systematic changes that require separating people from heavy industrial activity, no matter how good the intentions are.

Also left hanging was how to better regulate polluting compressors. The city's lawyers, who've written protective ordinances for Dish and Southlake, was more circumscribed with their Mansfield employers. Cities can't regulate pipelines and mid-stream compressors for "safety standards," already addressed by the Railroad Commission they said. Left unsaid was that cities can and have regulated compressors for noise and "odors," otherwise known as toxic chemical exposures.

Bounds presented the city council with what she called a model ordinance that combined the best, most protective aspects of drilling regulations from DISH, Southlake, Dallas, Denton, Arlington and even Fort Worth. Saying these were legal requirements that hadn't been challenged by industry and so were available for adoption by the city, Bounds put the council on the spot by saying Mansfield needed to protect its citizens at least as much as these other municipalities and had no legal excuse for not doing so. Mayor David Cook took note of the work she'd done in compiling the new ordinance and said the city would perform its own side-by-side comparison and come back in January to continue the discussion.

Overall, the mood of the evening was cautious but positive. It was hard not to be impressed by the residents' knowledge and expertise, and everyone was civil in public. Afterwards, however, one of the first things Bounds heard was an industry operator telling her there was no way he was going to accept a 1500-foot setback. There is still plenty of work to be done. But it was a step in the right direction. And there are no big changes without incremental changes first.

It helped that the media were out in force, trying to identify the next fracking hotspot after Denton. There was a row of TV cameras and local and national print reporters showed up to take notes. Channel 8 had the best coverage of the evening, and if you can get past the paywall, here's the Star-Telegram's take.

As has been noted before, Mansfield is no Denton. It's not even Southlake or Flower Mound. It resembles Ft. Worth more than it does Dallas in terms of politics and attitudes toward the gas industry by the Powers That Be. It has more wells per capita than just about any place else in the Shale. But those are all reasons that make it worth fighting the good fight there. If residents can make their case effectively and change their situation in Mansfield, then there really is hope for everyplace else in the Barnett. Stay tuned. 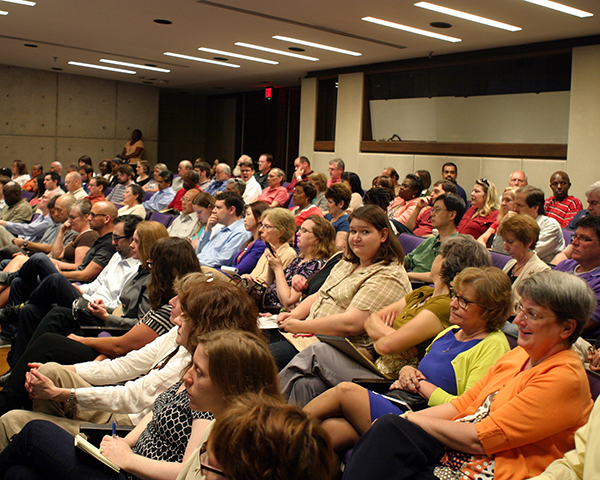 Woody Allen is famously credited with the line that "showing-up is 80% of life." With organizing, it's more like 90%. There are at least two places to be tonight where just your butt in a seat will make a huge, positive difference:

After almost a year of struggle, residents of Mansfield are getting a hearing tonight in front of their city council. Unfortunately, the council, including two members who make a living from the gas industry, are making the  the residents take on the Texas Commission on Environmental Quality, the Texas Railroad Commission, 10-13 gas industry representatives, pro-industry state representatives, senators, and Congressman, as well as their own city staff  – all in one evening. They're besieged, and they really need your help tonight.

We have it on good authority that the Mansfield Mayor is using this set-up to "gauge public opinion on the issue" even though members of the public won't get to speak. So it's all about attendance – butts in seats.

Mansfield isn't Dallas. It isn't Denton. It's not even Southlake or Flower Mound. It's deeper into the Shale, more blue collar, and more pro-industry than any other city that's been challenged over their old drilling ordinance in the last several years. The city has more gas wells now per capita  – over 200 in a city of 60,000 – than just about any other place in North Texas – with a potential for 300 more.  Concerned residents are at a disadvantage in trying to change the status quo.

Just your being there in a seat tonight sends a message you care about this issue. And if you live in Tarrant county or any place else where there's gas drilling in the Metromess, it's in your own self interest to help them in Mansfield. A victory there will make it more possible to win in other places. It will mean less air pollution from their wells and compressors blowing downwind. It will mean the tide is moving further west.

So do yourself, the region, and the cause a favor and show up tonight. You don't even have to speak. You just have to be present to win.

State Representative Rafael Anchia is sponsoring this debate over this leftover 20th Century boondoggle that features almost all the major players on both sides of the issues – Michael Morris, Mary Suhm, Patrick Kennedy and Scott Griggs. Again, your presence sends a valuable signal – that you're opposed to this floodplain toll way, and that this will be an important issue in the May Dallas elections. Go and be active members of the peanut gallery – cheer on the opponents, jeer the supporters.

It's particularly important that the public show increased interest tonight as Suhm and Mayor Rawlings conspire to muddy the waters with a new "review" of the plans of the road. They hope to give Citizen Council-backed candidates in the May election a way out of a simpey yes or no answer to the Toll Road – by saying their waiting for the review. You need to make sure they get the message that nobody is falling for that ruse.

Your butt can be a powerful voice for change tonight, or it can sit on the couch. Get out and show-up.