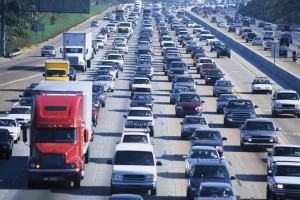 A large new European study released this week found that as much as 14% of chronic children's asthma in the Continent's urban areas could be due to traffic pollution. That would put it on par with the effects of second-hand smoke, linked to anywhere from 4 to 18% of all childhood asthma.

"Air pollution has previously been seen to trigger symptoms but this is the first time we have estimated the percentage of cases that might not have occurred if Europeans had not been exposed to road traffic pollution," lead author Dr. Laura Perez, at the Swiss Tropical and Public Health Institute, said in a press release. "In light of all the existing epidemiological studies showing that road-traffic contributes to the onset of the disease in children, we must consider these results to improve policy making and urban planning."

Although the idea of getting cars off the road as a benefit of mass transit isn't new, this study and others that have been published recently flesh out a new public health concern about the immediate impacts of such reductions in the neighborhoods adjacent to highways. Often these neighborhoods are already low and moderate income, and/or minority-majority with higher-than-average asthma rates already institutionalized because of lack to access to care, poverty or other factors. Highway plannning has yet to take this kind of localized impact into account, especially in Texas and DFW, where regional highway builders are still salivating to build the Trinity Toll Road straight through the middle of Dallas or criss-cross Ft. Worth neighborhoods with the new "Chisholm Freeway."

Asthma affects one in 12 people, or 8 percent of the U.S. population, according to 2009 data from the Centers for Disease Control and Prevention. The number has increased since 2001, when one in 14 people were affected. 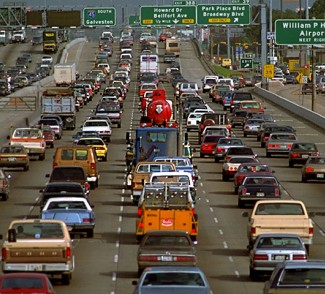 Along with a higher risk of asthma, children who are born and live their first year closer to major freeways also suffer a significantly elevated risk of autism. That's the conclusion of a new study by the Keck School of Medicine of the University of Southern California in Los Angeles.

They found that children exposed to the highest amount of "particulate matter' – a mixture of acids, metals, soil and dust – had about a two-fold increase in autism risk. That type of regional pollution is tracked by the Environmental Protection Agency.

Volk and her colleagues also saw a similar link between autism and nitrogen dioxide, which is in car, truck and other vehicle emissions.

'This is a risk factor that we can modify and potentially reduce the risk for autism,' wrote Dawson in an email to Reuters Health."

It's been estimated by the Centers for Disease Control that autism affects one in every 88 children born in the United States.

A new federal Particulate Matter standard is under consideration by the EPA and could be announced this year. It's been linked to other neurological diseases such as Parkinson's and Alzheimers.