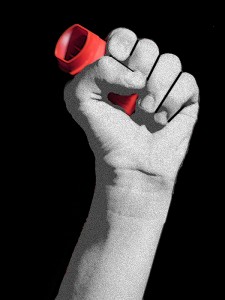 Sometimes it takes a perspective above the grind of trench warfare to give you a better sense of what the entire battlefield looks like. That's what UT Law Professor Rachel Rawlins has done for Barnett Shale activists with the recent publication of her article "Planning for Fracking on the Barnett Shale: Urban Air Pollution, Improving Health Based Regulation, and the Role of Local Governments" in the new Virginia Environmental Law Review.

Don't let the academic title fool you. This is a call for a radically new approach to how communities in Texas regulate the risks of fracking, and every other type of heavy industry. We put the link up for the piece on our Facebook page on Saturday based on a quick reading of its commentary on the Flower Mound cancer cluster, but it's more, so much more than that. Among other things, it's a comprehensive rebuttal of every claim of safety and well-being ever issued by the industry or state authorities about the health of residents living in the Barnett Shale, of which the Flower Mound case is only one example. Rawlins has produced a one-stop catalog of each major air pollution health controversy in the Barnett since concerns began to grow in the last decade, with an almost 30-page review of why no industry or government-sponsored study of fracking pollution and its health effects is a satisfactory response to those concerns. Want to convince your local officials that fracking isn't as safe as it's touted? Here's the staggering blow-by-blow commentary to do it.

In making this recommendation, she echoes the strategy that's been driving Downwinders since it was founded – that the best way to regulate pollution problems is at the local level where the most harm is being done, and it should be directed by the people being harmed. This is what drove our Green Cement campaign that closed the last obsolete wet cement kiln in Texas. This is what fueled our campaign to close down the trailer park-come-lead smelter in Frisco. And it's what was behind the recent Dallas fights over drilling. In each case, it wasn't Austin or Washington DC that was the instrument of change – it was local governments, pressed by their constituents, flexing their regulatory powers. The same thing is driving activists in Denton who are organizing the ban fracking petition drive and vote.

This strategy avoids battles where industry is strongest – in the halls of the state capitol and in DC, where citizens are outspent millions to one. Instead, it takes the fight to neighborhoods where the harm is being done or proposed, where people have the most to lose, where the heat that can be applied to elected officials is more intense. Citizens will still get outspent, but the money doesn't seem to buy corporations as much influence among those actually breathing the fumes of the drilling site, or smokestack.

Particularly now, with corporate-friendly faux-Tea Party types in control of state government and the House of Representatives in DC, there is little room for grassroots campaigns to make a difference by passing new legislation.  Even if by some miracle a few bills did pass, their enforcement would be up to the same state or federal agencies that are currently failing citizens. Local is more direct, and more accountable. Professor Rawlins agrees, and spends most of the rest of her 81-page journal article citing the ways in which local control of fracking in the Barnett Shale is hampered by the out-dated top-down approach to regulation, and what should be done to fix that.

Included in her recommendations are two long-term Downwinders projects: Allowing local governments to close the "off-sets" loophole for the gas industry that exempts them from having to compensate for their smog-forming pollution in already smoggy areas like DFW, and creating California-like local air pollution control districts that could set their own health based exposure standards and pollution control measures without having to go through Austin or DC.

If there's a single major fault in Rawlins's analysis, it's that she believes more local control of pollution risks is itself dependent on action by an unwilling state government. But Downwinders and others have shown that isn't true. Our most significant and far-reaching victories – from the closing of the Midlothian wet kilns to the new Dallas drilling ordinance – have all taken place while Rick Perry was Governor and the state legislature was in the hands of our opponents. We did these things despite Austin, not because we had its permission. Local zoning laws, local permitting rules, local nuisance acts, and other local powers are under-utilized by both residents and their elected officials when it comes to pollution hazards.

The same is true now of Downwinders' off-sets campaign aimed at the gas industry. We think we've found a way to avoid the "preemption" argument that would keep local governments from acting on smog pollution from gas sources by aiming the off-sets at Greenhouse gases – an area of regulation Texas is loathe to enter. By targeting GHG reduction, we also reduce a lot of toxic and smog-forming air pollution. It's a back door way, but it accomplishes the same goal. It's going to be up to Texas activists to sew similar small threads of change through an otherwise hostile political environment.

Even given that flaw, Professor Rawlins' introduction to her article is the most concise summary of the air pollution problems caused by gas mining and production in the Barnett, as well as the most credible call to action for a new way of doing business there. Here it is reprinted in full for your consideration:

In the last decade hydraulic fracturing for natural gas has exploded on the Barnett Shale in Texas. The region is now home to the most intensive hydraulic fracking and gas production activities ever undertaken in densely urbanized areas. Faced with minimal state and federal regulation, Texas cities are on the front line in the effort to figure out how best to balance industry, land use, and environmental concerns. Local governments in Texas, however, do not currently have the regulatory authority, capacity, or the information required to closet he regulatory gap. Using the community experience on the Barnett Shale as a case study, this article focuses on the legal and regulatory framework governing air emissions and proposes changes to the current regulatory structure.

Under both the state and federal programs, the regulation of hazardous air emissions from gas operations is based largely on questions of cost and available technology. There is no comprehensive cumulative risk assessment to consider the potential impact to public health in urban areas. Drilling operations are being conducted in residential areas. Residents living in close proximity to gas operations on the Barnett Shale have voiced serious concerns for their health, which have yet to be comprehensively evaluated. Given the complexityof the science, and the dearth of clear, transparent, and enforceable standards, inadequate studies and limited statistical analysis have been allowed to provide potentially false assurances. The politically expedient bottom line dominates with little attention paid to the quality of the science or the adequacy of the standards.

Determining and applying comprehensive health-based standards for hazardous air pollutants has been largely abandoned at the federal level given uncertainties in the science, difficulties of determining and
measuring “safe” levels of toxic pollutants, and the potential for economic disruption. Neither the state nor the federal government has set enforceable ambient standards for hazardous air pollutants.

Identifying cumulative air pollution problems that may occur in urban areas, the State of California has called upon local governments to identify “hot spots” and to consider air quality issues in their planning and zoning actions. In Texas, however, preemption discussions dominate the analysis. Any local government regulation that might provide protection from toxic air emissions otherwise regulated by the State must be justified by some other public purpose.

Texas should consider authorizing and encouraging local level air quality planning for industrial activities, similar to what California has done. Care should be taken to separate these facilities from sensitive receptors and “hot spots” that may already be burdened with excessive hazardous air emissions. Given the difficulty of the task, there is also an important role for the state and federal governments in working to establish ambient standards for hazardous air pollutants, as well as standards for health based assessment and public communication. The uncertainty inherent in any of these standards should be made clear and accessible to local governments so that it may be considered in making appropriate and protective land use decisions. Texas should consider allowing local governments to have the power to establish ambient air quality standards, emissions limitations, monitoring, reporting, and offsets for hazardous air pollutants, following the model applied to conventional air pollutants pursuant to the federal program.

Professor Rawlins' article provides Barnett Shale activists with a new map to guide them toward more effective action. We'd all do well to study it and pick local battles that promise to contribute toward its realization.