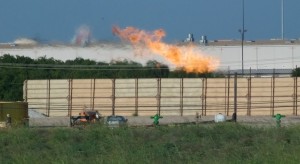 Despite all the gnashing of teeth by industry and hallelujah choruses from the Big Green groups, the new methane rules proposed by the Obama Administration this last week have no immediate impact on facts on the ground in the Barnett Shale.

That’s because, like the recent coal CO2 rules, they regulate future facilities, not the 17,000 or so wells, plus infrastructure, already operating in the Barnett.

They do bring a welcome spotlight to “downstream” facilities like gathering lines and compressors, which is where most of the methane in the gas fuel cycle escapes. They also concede the connection between methane releases and smog (“…reduction of VOC emissions will be very beneficial in areas where ozone levels approach or exceed the National Ambient Air Quality Standards for ozone”), as well as methane and more toxic Volatile Organic Compounds such as Benzene and Toluene (“The measures proposed in this action achieve methane and VOC reductions through direct regulation. The hazardous air pollutant (HAP) reductions from these proposed standards will be meaningful in local communities.”)

EPA’s new rules set a floor for emissions that the industry, over time, will eventually get closer to meeting as a while with the turnover of equipment. But that could take decades. Meanwhile, the agency is only offering “guidelines” to states with smog problems – like Texas – for new pollution controls to reduce methane at existing facilities.

Under this part of the regulation, areas like DFW that host large concentrations of gas pollution sources and are officially categorized as “non-attainment” for smog, or ozone, standards will supposedly be the beneficiaries of new EPA-written “Control Technique Guidelines.”

If you live in Texas, you’ve already chortled at that last sentence. Really? The Texas Commission on Environmental Quality (TCEQ) would have to use these new technologies on gas sources in their new clean air plans for DFW? Something they’ve refused to do for the last two clean air plan cycles dating back to 2010?

Well, they have to address them at least. And a lawsuit aimed at gutting the new rules is a form of addressing isn’t it?

These are guidelines only, up to the state to enforce – as the EPA admits. “States have some discretion in applying these guidelines to individual sources.” The leverage EPA has is that it still needs to approve these state-generated clean air plans and it can make an official determination that a state didn’t follow the guidelines and send it back to be amended.

This might not be all that important except that the State of Texas is going to have to write a new air plan for DFW in the next year or face the prospect of a federal plan being written in its stead. The one Austin submitted in July is already falling apart on several fronts, and TCEQ has to submit a whole new version or face an EPA-imposed one.

Will the state at least have to acknowledge these guidelines in this current air plan controversy? No. The states have two years to fold the proposed CTGs into their SIPs. So they don’t even have to come into play until this current state plan fails, and Austin or the EPA begin to write a replacement. And why might this plan fail? In part, because it doesn’t apply modern controls to major sources like oil and gas facilities.

You might remember in July, a total of 11 studies were collectively released that concluded the Barnett Shale was leaking 50 percent more methane than previously thought. The day before the EPA made its announcement this week, a national version of those studies estimated US methane pollution from oil and gas was being underestimated by 30%. That’s important because many models of air pollution used by the EPA and the states use those standard emissions estimates that now look obsolete. If you increase the amount of methane, and associated pollutants, by 30-50% in those models, the results might look very different.

So even though the state isn’t officially required to include this new approach to decreasing VOC pollution until 2017 or later, it’d be nice to see it adopted now and have an immediate impact on a region that has a longstanding chronic smog problem. But as long as Texas is in charge of writing DFW’s air plans, that’s just not gong to happen.