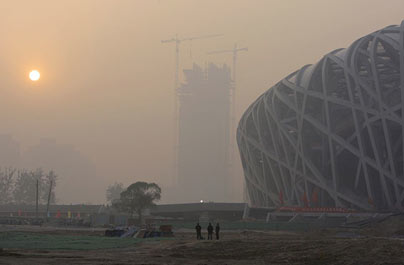 We can't tell you how many times a resident from DFW will go on a business trip or vacation to a less-polluted place and report an almost instant shedding of the ill effects of dirty air, only to have an almost equally fast re-acquaintance with those effects once they return. Could air pollution really make that much of a difference in so little a period of time?

As it turns out, yes.

Via an new study recently published in the Journal of the American Medical Association, researchers found that the Chinese government's decision to close down Beijing's polluting factories and take cars off the road during the 2008 Olympics resulted in a remarkable short-term improvement in cardiovascular health. It's the first major study to look at the immediate effects of air pollution in young healthy adults.

In a synopsis published by Environmental Health News, one of the authors describes the study and its importance:

"For the 5-month study from June to November, the researchers recruited 125 resident doctors with an average age of 24 from a centrally located hospital. Half were male, and all were healthy with no history of diabetes or cardiovascular disease.

Two markers associated with blood clotting significantly decreased from pre-Olympic to the during-Olympic period: P-selectin levels dropped by 34 percent and von Willebrand factor levels were reduced by 13 percent. After the games, when the pollution control measures were removed, most markers rose back to pregame levels. But two markers – P-selectin and systolic blood pressure – worsened and showed a significant increase compared to the levels during the games.

Air pollution emissions were also measured at similar times. Levels of most air pollutants during the games decreased up to 60 percent compared to their pregame levels, depending on the type of pollutants. For example PM2.5 dropped 27 percent, nitrogen dioxide 43 percent and sulphur dioxide 60 percent. After the games when pollution controls were removed, emissions rose to higher levels than were measured before the games started.

This study suggests that even young healthy people can benefit from short-term air pollution reduction and supports efforts to quantify and understand the benefits and costs of air pollution control measures."

The next time a politician complains about the cost of air pollution controls, make sure and ask them if they're for preventative heart disease treatment. When they say yes, please remind them that keeping crap out of our air that would otherwise end up in our lungs is such preventative care.