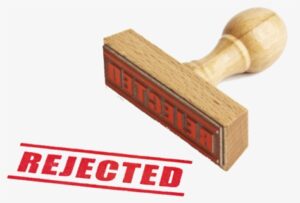 When Janie Cisneros and her Singleton United contingent met with EPA Region Six Director Dr. Earthea Nance and her staff on June 1st, one of the residents’ goals was to convince EPA to send West Dallas asphalt shingle maker GAF’s Title V operating permit back to the Texas Commission on Environmental Quality for a rewrite.

In a stunning rebuke that often echoed the sentiments and language used by West Dallas residents campaigning for GAF’s closure, EPA sent notice to the company, state, and residents on late Friday afternoon that not only was the permit deficient, so was the state process that approved it.

The EPA letter is posted on Downwinders’ FaceBook page here.

EPA often gives authority to state agencies to tentatively approve or deny all renewing federal permits in their jurisdiction but retains the right to send the permit back to the agency for reconsideration if it finds the finished product isn’t fulfilling federal regulatory requirements. Even though TCEQ had approved the GAF permit in Austin, it still needed EPA’s approval in Dallas. It didn’t get it.

And the permit didn’t just get sent back. It got sent back with a big ol’ boot print on it. In both tone and scope, EPA’s response is unprecedented.

In its letter EPA identified five major objections, all of them coming down to a different version of the same demand: “TCEQ must ensure that the Title V permit includes monitoring, recordkeeping, and reporting sufficient to assure compliance with the hourly and annual emission limits” GAF has listed in its permit. 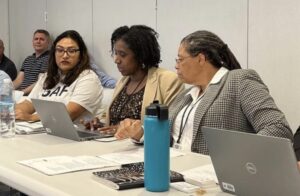 EPA staffers expose the disconnect between GAF’s estimated  permitted emissions and the non-existent, obsolete, or ineffective ways those emissions are accounted for in the permit. This includes the lack of any stack testing on major pollution control equipment in over 14 years at the GAF factory  – a major point of contention with residents at their June 1st meeting with EPA.

“It is unclear and the record does not justify how a stack test last conducted 14 years ago during GAF’s normal operations is still representative of current operations….” concludes EPA, and then adds,

“It is unclear to EPA why GAF is not required to conduct periodic stack testing of its thermal oxidizer at a minimum frequency of at least once per permit term (ex. every five years) for VOC, SO2, CO, NOx, PM10, PM2.5 (filterable and condensable), and any relevant Hazardous Air Pollutants. TCEQ must explain how it has determined that the emission characteristics of the Thermal Oxidizer/Waste Heat Boiler have not changed since the latest stack test and are not expected to change over the term of the Proposed Permit. Conversely, if TCEQ believes that the emissions characteristics are reasonably likely to change over time, TCEQ must amend the permit to require periodic stack testing with a specified frequency. Further, TCEQ must amend the Proposed Permit to require the use of the emission factors from the most recent stack test and ensure the calculations used to determine compliance are made part of the permit. “

Because the Proposed Permit does not identify with enough specificity a particular monitoring or recordkeeping requirement associated with the related units, neither the public nor the EPA can ascertain from the permit what monitoring or recordkeeping methodology the source has elected to use, or whether this methodology is sufficient to assure compliance with all applicable requirements. This effectively prevents both the public and the EPA from determining if the chosen monitoring, recordkeeping, and reporting satisfies Clean Air Act requirements.”

Considering how far off the mark the company has historically been in estimating its own pollution to both TCEQ and EPA, this is not an unreasonable requirement. It’s the taking to task of TCEQ’s lack of rigor that’s eye-opening and new.

The majority of EPA’s letter is spent on this kind of combination of surgical/technical explanation of why a permit provision is inadequate, and their slacked-jaw astonishment that TCEQ could approve such a thing. 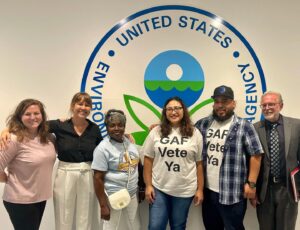 As part of this section, EPA does a deep dive into the history of GAF’s nuisance complaints submitted by residents over the last 20 years and concludes “…based on the consistent frequency and nature of odor complaints, nuisance events still appear to be adversely and disparately impacting West Dallas residents’ quality of life and interfering with the normal use and enjoyment of property.”  In writing the sentence this way EPA is quoting from the TCEQ’s own definitions of “air pollution” and “nuisance.” With it, EPA has given the City of Dallas just about all the evidence it needs to proceed with amortization.

Clearly exasperated, EPA asks, “Can TCEQ explain what measures, including any associated monitoring, that GAF has implemented that ensures ongoing compliance with the nuisance provisions outlined in 30 TAC § 101.4 or any other information that may provide the EPA and the public certainty that odors leaving the plant are not in violation of nuisance provisions? Has TCEQ been on-site during the heating and unloading of railcars while the “top hatch on the railcar is cracked open” and confirmed whether such unloading operations are a source of emissions/odors at the site? Lastly, complainants and investigators have identified both odors and “smoke” at the site. Has GAF and/or TCEQ considered voluntarily adding new pollution controls and work practice standards to reduce off-site odors as well as SO2 and PM2.5 emissions to minimize potential impacts on the community?”

EPA concludes its letter with advice to TCEQ on how the agency should align its permitting process with modern Environmental Justice metrics and principles. It even gives the state two recommendations: “1) TCEQ should engage early in the permitting process with communities and applicants to address environmental justice, and 2) TCEQ should avail itself of EPA’s most recent EJ resources and tools, such as use of the most up-to-date EJScreen tool and EJ related trainings available.”

It’s clear from the examples and even direct quotes used in the letter that someone at EPA has actually reviewed the blow-by-blow summary of GAF’s 45-year regulatory track record on the Singleton United website as well as its “Case for City Amortization of GAF” – and finds them compelling.

“So Long GAF” postcards on the company’s fenceline May 17th

That’s got to be concerning to GAF management as they continue to try and negotiate their way out of a forced exit by the City. Because as surely as EPA was lecturing the State of Texas in its letter, it was also sending a message to GAF HQ in New Jersey. The message is something like….

“It’s mid-2022 and your Title V permit isn’t even close to being finalized. We’ve challenged TCEQ to make you prove so many things you haven’t wanted to prove in so long that it might take years to work out the kinks – that is, if you really want to. We’re sure we don’t have to remind you that your big, fat, overarching “New Source Review” permit that covers literally everything you’re doing in West Dallas is coming up for renewal in November 2024. That will make this look like a Methodist picnic. Do yourself a favor: work a deal and leave now, while you’re still in control of your own clean-up at a 76-year old factory site.”

But Texans have never seen an EPA talk to polluters or their facilitators at TCEQ they way it does in this GAF Title V letter. It’s a big and welcomed change. And it was initiated by that group of determined Singleton United/Unidos residents back on June 1st. Congratulations.