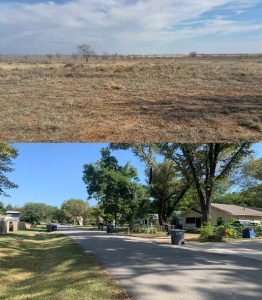 What if you found out an industrial polluter was operating in your densely-populated neighborhood and the state told you not to worry because an obsolete computer model of the polluter’s releases 17 years ago and 500 miles away, in a desert, performed by the polluter themselves, said everything was OK?

That’s exactly the situation Joppa residents find themselves in as the Texas Commission on Environmental Quality (TCEQ) goes through the motions of renewing one of the permits of the many industrial polluters located in the community. 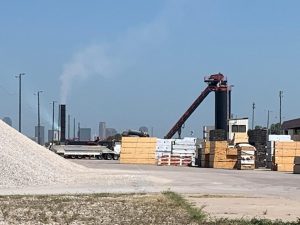 Austin Industries’ asphalt batch plant sits next to the Marietta Martin (TXI) concrete batch plant in Joppa, and both are in the Union Pacific switch yard and all of those are adjacent to the giant Tamko asphalt roofing factory.

Austin has applied to the TCEQ for a renewal of its 10-year old air permit for its Joppa plant and gave notice last December. Legal Aid of NorthWest Texas requested a contested case hearing on behalf of the Joppa Freedman’s Town Association and Downwinders at Risk requested one on behalf of resident Jabrille McDuffie.

To absolutely no one’s surprise, TCEQ’s Executive Director recommended against such a hearing at the beginning of August in comments mailed out to all parities. He argued that contrary to the opponent’s claims there was sufficient evidence that Austin Industries permit in Joppa was following the law and was “protective of human health.” Previous “air quality analysis,” the Executive Director says, have concluded such already.

The entire basis of that “air quality analysis” is the computer air modeling performed by Austin Industries’ hired contractors and supposedly double-checked by the state…in 2002.

Just like any other computer model, it all depends on the variables: volume of air pollution, local meteorology, stack height, local “receptors” aka people or animals who live by or near the facility, and even local terrain. Winds do one thing to air pollution on the open plains and another in the middle of a city block.

Because of these variables, an Exxon refinery that wants to build a facility in Houston with the exact same design as is has in Arkansas still has to submit a separate computer model to account for the distinct surroundings in the new location. The one from Arkansas just won’t do for Houston. 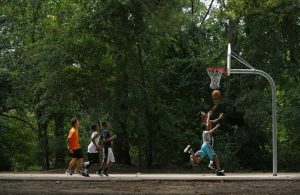 According to the TCEQ the Austin Asphalt facility is a portable asphalt batch plant operation. That means it wasn’t built specifically for its current Joppa site. It was moved there and it can be moved somewhere else.

In 2002 it first operated in Hockley County, a rural part of Northwest Texas near Lubbock some 400 miles west of Joppa. It moved to its current location in Joppa in 2008.

In 2002 the TCEQ let Austin Industries use what’s called a “SCREEN3” air model to determine if the air pollution from its asphalt batch plant’s was a threat to anyone in Hockley County. Again unsurprisingly, the firm hired by Austin Industries to do the computer modeling found it was “protective of human health.”

TCEQ says the Austin Industries’ asphalt plant has never been subject to any additional “impacts evaluation.” besides this 2002 review.

That means the only air modeling ever done for this Austin asphalt plant was while it was operating in rural Hockley County in 2002. There has been no air modeling of the plant since it came to Joppa in 2008. 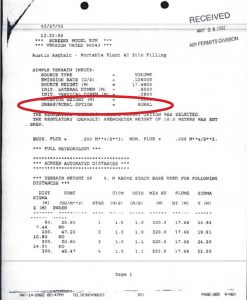 In 2002 the Austin plant was in West Texas and used a rural air model. In 2019 they’re still using for it for operation in Joppa.

Besides the most obvious and important difference in population density between unincorporated Hockley County near Lubbock and inner city Dallas, all of the variables in the 2002 modeling apply only to the Hockley County location. Meteorology, stack height, and surrounding terrain among them. In fact, the entire model was defaulted to a “rural” versus “urban” option in 2002.  This renders the modeling scientifically useless in its current location in Joppa.

But that uselessness isn’t keeping the Executive Director of the Texas Commission on Environmental Quality from citing it to justify renewal of Austin’s air permit.

There’s also the matter of the age and limitations of the SCREEN3 model. In 2011 EPA replaced it with something called the “AERSCREEN” model. In doing so the agency called the old model “outdated“ and said “there are no valid reasons” to keep using SCREEN3.

And it’s not just the EPA. State environmental agencies, like the Arizona Department of Environmental Quality, have quit accepting SCREEN3 modeling.

Alex De Visscher, Associate Professor and Canada Research Chair in Air Quality and Pollution Control Engineering at the University of Calgary, writing in an 2013 text book entitled “Air Dispersion Modeling: Foundations and Applications,” said SCEEN3 is a “product of a previous generation of air dispersion modeling” and “is no longer a recommended model… it does not allow for multiple sources, and it does not include atmospheric chemistry or deposition.”

These exclusions are important. There are multiple sources of Particulate Matter 2.5 air pollution at Austin Industries’ plant in its Joppa location, including piles of raw material, and industrial combustion at the site. SCREEN 3 modeling didn’t and wouldn’t reflect these multiple sources of pollution. And of course when you’re talking about PM 2.5 pollution, as you are with an asphalt batch plant, the atmospheric chemistry and deposition, or fallout, is critical.

The TCEQ itself says it makes a fundamental difference whether the air model for a polluter is run for urban or rural terrain. Yet for over a decade TCEQ and Austin Asphalt have misused the results of a “rural” computer model to misleadingly assure inner-city Joppa residents that the company’s asphalt plant posed no harm.

What’s more, the modeling performed in 2002 only examined “asphalt vapors,” a made-up, vague pollutant category that can’t be monitored or measured. It didn’t examine Particulate Matter 2.5 pollution or specific Volatile Organic Compounds that make up those “vapors” and was therefore incomplete in the extreme. 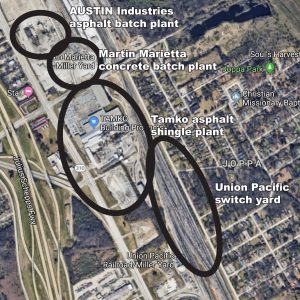 at past “air analysis” has shown Austin Industries’ plant to be protective of human health, in truth the only “analysis” ever done was performed 17 years ago in a sparsely-populated rural location 400 miles away from its current location, with what TCEQ admits are totally inaccurate modeling inputs by company consultants. It didn’t include all priority pollutants or even all sources of air pollution from the facility and the model used is now considered obsolete by EPA, modeling experts, and other state environmental agencies.

In its response to the Executive Director, Downwinders at Risk specifically requested TCEQ delay further regulatory action on this permit renewal until it can conduct a modern comprehensive air modeling impact analysis for Austin Asphalt’s current operation in Joppa that requires an evaluation of all on-site sources of pollution, including fugitive and mobile sources, on the Austin Asphalt site, off-site near-by sources of pollution within a three kilometer (1.86 mile) radius of Austin Asphalt’s facility, and representative monitored background concentrations obtained from local Joppa neighborhood monitoring as well as modeling of permitted maximums emission rates form all sources.

On September 11th the Texas Commission on Environmental Quality will take up the Austin Industries permit renewal at its headquarters in Austin. Both Legal Aid and Downwinders at Risk representatives will be present to answer any questions from the Commissioners but will not be allowed to make any statements. We’ll let you know the outcome. 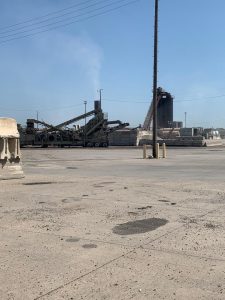 might reasonably ask why the City of Dallas itself isn’t fighting this permit renewal? After all in 2007, the city took on a string of proposed coal-fired power plants that it said would increase air pollution for Dallas. But to date that same city has never bothered to try and stop an industrial polluter from opening shop or renewing its permit in one of its most abused neighborhoods.

This dishonest use of a irrelevant model by the state’s discredited environmental agency shows why it’s imperative the City of Dallas – and all municipalities in Texas –  change the way they do business and be proactive in addressing their environmental justice and environmental health issues in their own city limits.

Too often city representatives default to state or federal officials on the environment when they should be the first line of defense, not the last. City officials’ reliance on a failed state agency to perform its job as environmental protector is what caused Shingle Mountain. It’s what caused this situation in Joppa. To change that means changing both policies coming out of City Hall and current City Hall culture. Environmental Protection is a Do-It-Yourself proposition these days.