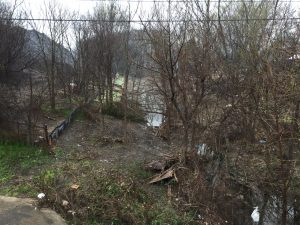 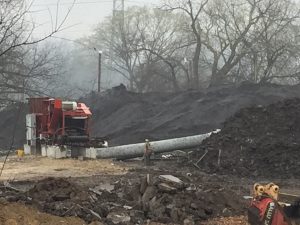 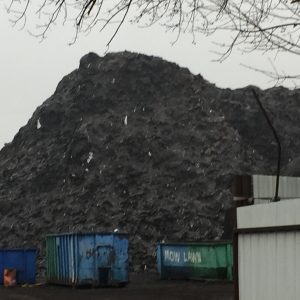 After complaining almost a year to the City of Dallas, the State of Texas, and the EPA without any action taken, Ms Jackson saw Wilsonky’s column set-off a flurry of official concern about this inept and dangerous operation destroying acres of tree-covered Southern Dallas and Ms. Jackson’s home of 25 years.

That’ll happen when the city’s most read reporter informs you for the first time in passing about a situation it’s your job to already know about. 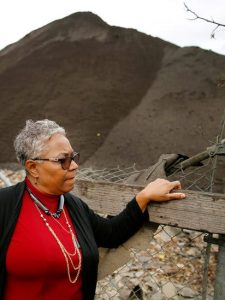 But that initial knee-jerk response left Blue Star still open for business, and without a clean-up. So Wilonsky wrote another column. Some more official action ensued. The City got a Temporary Restraining Order….that expired after a week. The authorities made Blue Star push their 4-5 story high mountains of used shingles back away from a small creek running through it’s property so the waterway would be better protected. Ms. Jackson? Not so much.

In fact, Blue Star has not been cited with even one nuisance, air pollution, or public health violation by the City of Dallas since it began building its special version of  Hell a little more than a year ago. Officially, the city has shown zero concern for the human toll being taken by Blue Star’s pollution.

Last month Wilsosky wrote his third column stating what many of us feel when we see the operation in person: “This is insane.” He got Dallas City Manager T.C. Broadnax on the record saying Ms. Jackson’s plight was the result of bad zoning, the kind that allows polluters to only set-up shop south of Dallas’ historic dividing line Trinity River. But no action was taken to change that zoning and Blue Star keeps right on accepting truckloads of old shingles and keeps grinding them up in the open-air using the industrial equivalent of giant wood chippers, spewing fiberglass, plastic and maybe asbestos into Ms. Jackson’s property and neighborhood.

Blue Star keeps operating even though the City of Dallas says the business didn’t have a Certificate of Occupancy when they opened, despite evidence current city zoning doesn’t allow what they’re doing on the property they’re doing it on, and despite evidence they don’t have all the environmental paperwork they need for the despoiling taking place.

Despite his best efforts to do the job the City and State are supposed to be doing, Wilonsky’s words just haven’t been enough to stop the obscene environmental and public health problems being caused daily by Blue Star.

So maybe it’s time to do this ourselves.

Maybe it’s time to file some lawsuits of our own, as citizens. There’s now plenty of documentation to prove the case of destruction, property rights takings, and personal and public health problems.  Are there lawyers working in the public interest who could pursue these on behalf of Ms. Jackson and her neighbors? Yes there are. There are ones who can sue for regulatory relief and others who sue for “personal damages” caused by this kind of reckless disregard. These “toxic tort” attorneys would do well to target the deep pockets of the City of Dallas and the State of Texas as well as the modest holdings of Blue Star. Often the way to permanently put a stop to this kind of thing is to make the responsible parities pay such a high price that they’re never even tempted to try it again.

Maybe it’s time for us to begin amortization proceedings against Blue Star. This is the process that closed the RSR lead smelter in West Dallas in the 1980’s. A city can change the zoning for a piece of property to something that clearly does not allow the current activity to take place on that property. In order to be fair, the law allows the current users to operate until they get their investment in the property back and then they have to close-shop and move. Once you see the Blue Star property, you’ll understand that it’ll take about a day and a half for the company to get back its “investment.” In fact, because of all the violations of law and probable lawsuits, Blue Star is probably already close to being in the red.

Amortization proceedings can be initiated by the City Council OR citizens themselves. Here’s a description from the Dallas City Code using the City’s 15-member, council-appointed Board of Adjustments:

Ms. Jackson owns her house. So maybe it’s time we help her petition the Board of Adjustments to begin kicking Blue Star out of Southern Dallas ourselves. If the Council wants to do its job and join in, that w 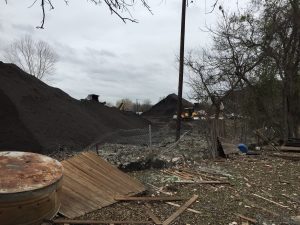 ould be great. But we don’t need them to start the ball rolling.

Maybe it’s time we protested. Not just on behalf of Ms. Jackson, but the ancient, racist underlying cause of this awful situation and so many more south of the Trinity River. Everyone who lives in the “Southern Sector” is a current or potential Marsha Jackson. We’ve got to begin to change the entire zoning map of the city to get rid of the kind of outrages even the City Manager acknowledges are a problem. We need to demonstrate not just against Blue Star, but for improvement across the board, for real progress on the City’s own Master Plan for South Central that aims to “de-industrialize” the area – not make it into a wasteland. We need a platform for progress that address the Southern Sector as a whole instead of continuing to play whack-a-polluter every few months at a different location. 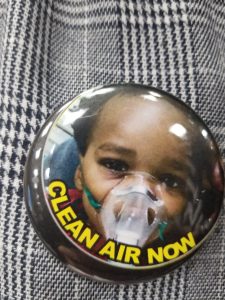 he Let Joppa Breathe Alliance has been meeting to try and draft such a platform as part of its mission. It’s been recruiting allies south and north of the river. It’s very near to making an announcement about that platform and the means it will begin to pursue it.  This platform will be the first attempt to articulate specific City of Dallas environmental justice policy changes in the City’s history. It represents a tectonic shift in responding to age-old discrimination that’s still leaving a huge dusty coal-like legacy in Southern Dallas. We’re tired of playing defense. Its time we set the agenda.

Dallas City Hall has failed Ms. Jackson and her neighbors. It’s failed Joppa. It’s failed Cadillac Heights, and Highland Hills and Fruitdale, and West Dallas. Over and over again. To win progress, something more must be done. When the call comes for that something more, how will you respond?