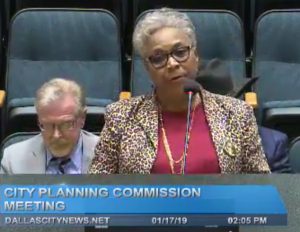 But this time they had to take on
their own Council Member and Plan Commissioner.

In one of the most impressive recent displays of South Dallas neighborhood empowerment, residents won their fight last Thursday at the Plan Commission to keep yet another batch plant from setting-up shop among them.

But unlike past battles, they had to overcome their own Council member and his Plan Commissioner to do it.

Residents, as well as representatives from the Joppa Freedman Township Association, Paul Quinn College, the Inclusive Communities Project, and Downwinders at Risk all spoke out against the idea of transforming another piece of South Central Expressway property into a hub of heavy industry.

Leading the other side in support of the Bird Lane batch plant was of course the company proposing it, Estrada Concrete, and their consultants, but also District 8 Council Member Tennell Atkins’ Plan Commissioner, Chris Lewis. Bird Lane is in District 8.

Usually the support or opposition of the home district Council Member and Commissioner is key to the final tally, but in this case, the strength of the case against the plant was so solid, and Lewis’ plea to approve it so feeble, that a majority of his peers rejected his request. As these things go, it was a huge, humiliating smack down.

Lewis’ anti-citizen stance is more shocking once you know that only five days earlier he’d assured District 8 residents he’d be voting against the batch plant. Instead, the moment the last of the opposition speakers finished (there were no residents speaking in favor), he immediately made a motion to approve the batch plant.

Needless to say, that turn of events caught everyone opposing the plant off guard and provoked a rowdy backlash in the audience that built until the final vote was taken. 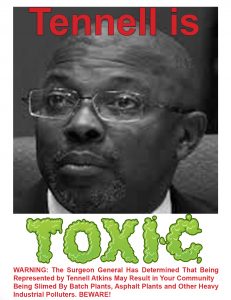 If it hadn’t been for District 11 (Kleinman) Commissioner Jaynie Schultz, District 3 (Narvaez) Commissioner Deborah Carpenter, District 5 (Callahan) Commissioner Tony Shidid, and District 1 (Griggs) Commissioner Jarred Davis raising objections, asking hard questions, and pointing to specific guiding language in the Dallas Planning Code, the vote would have gone against neighbors.  In other words, there were at least four other Commissioners doing the work on behalf of District 8 residents that Mr. Lewis was appointed to do. Both Kevin Felder’s and Casey Thomas’s slots on this important body are currently MIA because they haven’t yet named replacements for their departed Commissioners.

That’s not a traditional liberal-conservative alliance that defeated the batch plant– you won’t find Scott Griggs and Rickey Callahan tossing back beers together. Nor is it a strictly black and white split. Of the two black Commissioners present, the only one voting for the batch plant was Mr. Lewis.

It was a neighborhood/Citizens Council split.

Not in any “big” issue, lots-of-phone-calls-before-the-vote kind of way. Rather, in a small, looking-out-my-own-backdoor kind of way.

Commissioners who opposed the batch plant couldn’t imagine looking out their own doors and seeing this thing as a neighbor. Those voting in favor knew such a fate was impossible for them.

Final proof is found in looking at who voted in favor of Lewis’ original motion to approve the batch plant. It included  longtime Dist 15 (Rawlings) Commissioner Gloria Tarpley who’s distinguished herself in the past by voting for illegal gas drilling, and the Commissioners from Districts 13 (Gates), and District 10 (McGough).

As per usual, Dallas City staff had recommended approval of the Bird Street Batch plant, so residents really were fighting the entirely of City Hall – including the guy that’s supposed to be their full-time advocate at the place.  And yet they persisted. And they won.

As it happens, the knock -out was a twofer. Not only did District 8 residents defeat the Bird Street batch plant, but they also learned that plans for Estrada’s other proposed batch plant around the corner on Zonie Road were being pulled as well.

Their victory – your victory too thanks to over 100 emails of opposition sent through our Citizen Action portal – was one event in a series of recent events that have given environmental justice issues in South Dallas some real traction of late. The first Joppa batch plant fight last March, announcement of the new Superfund site near Paul Quinn, discovery of Marsha Jackson’s “Asphalt Alps,” and other open wounds are beginning to provoke community self-defense responses.

Whether those responses can overcome South Dallas business as usual at the ballot box in May, or produce systematic change at City Hall, is a large and important question not only for South Dallas, but Dallas as a whole. We all live in neighborhoods. We all live downwind.