Say NO to Dirty #Energy Bag

Our efforts to stop plastic garbage burning in cement plants got a boost last week when the San-Francisco based Global Alliance for Incineration Alternatives (GAIA) kicked-off a national campaign with a video from the The “Story of Stuff” folks accompanying a pledge of opposition to the practice you and your group can sign online.

In July, we reported on a plan by DOW Chemical and Keep America Beautiful to encourage you to bag up those “hard-to-recycle” plastics and send them to a cement kiln to be burned without the expense of all those environmental controls you’d have to deal with at a legitimate waste disposal site. The two were offering US communities at least $50,000 in subsidies to go along with the idea.

This is already happening in Omaha, where 8,500 homes have filled 13,000 “Hefty Energy Bags”  since the program’s launch a year ago. That’s resulted in more than 13,000 pounds of plastics being burned in a near-by cement kiln.

Since DFW is home to the largest concentration of cement plant manufacturing capacity in the country, and since those cement plants already burn industrial wastes in an attempt to cut their high fuel costs, the expectation is that this practice will sooner or later be proposed for North Texas cities. And indeed, when DOW and Keep America Beautiful held a press conference advocating plastics burning across the country this summer, there was a big red star right over DFW as part of the project’s projected growth.

The Story of Stuff video from GAIA actually takes the video DOW used to introduce its “energy bags” earlier this year and tweaks it to tell the story of “dirty energy bags.” 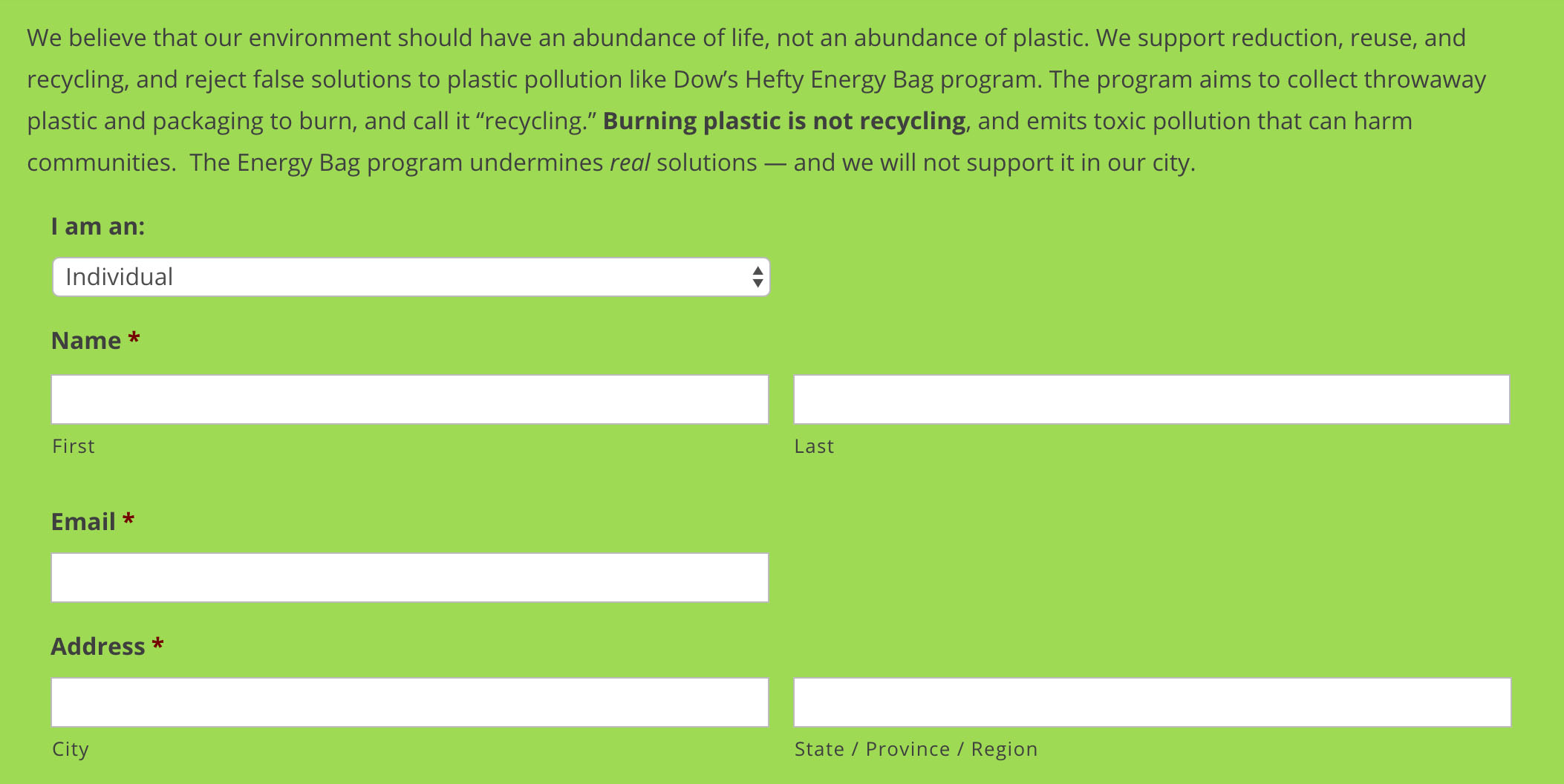 The GAIA website makes the case that single-use plastics already crowd our landfills and pollute our waterways, but burning them offers a greenwashing “relief valve” to allow continued, or even increased production of this kind of plastic.

Plastic is made from fossil fuels, and in order to make sure we have a liveable planet for generations to come, we need to transition to a circular economy where our products can be easily reused or recycled, not produced from scratch using greenhouse gases.

Send a message that you will not support the Hefty Energy Bag in your city, and let’s expose the truth behind the bag!

It will take you all of 30 seconds, but it will send a message to stop this very bad idea before it gets too far.

And if you haven’t already, you can still send an email to the chair of Keep America Beautiful with our click ‘n send featured citizen action. Helen Lowman’s from Texas and maybe you can convince her this isn’t a very neighborly thing to do.