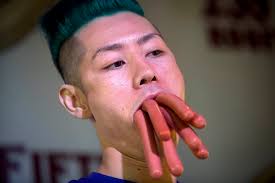 Dow, Hefty and Keep America Clean’s proposal to burn plastics via bright orange “energy bags” in cement kilns is new but the idea of using kilns as industrial kitchen dispose-alls is not.

DFW has been identified as a national waste disposal destination because of its cement plants since at least the mid 1980’s. And as long as they continue to operate, the area will continue to be seen as a desirable dumping ground.

All these buildings, and roads, and “developments” have to be made out of something. They’re mostly made out of cement. In an area that’s grown by a Tyler or Richardson a year since 1970, cement is as ubiquitous as the air in your lungs. You just take it for granted. But it comes from somewhere and it gets made someplace. 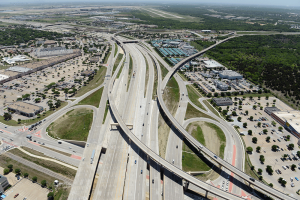 In our case, that place is here – right over there, in Midlothian, just a couple of miles across the Dallas and Tarrant County lines to the south. You know, the direction the wind blows from most of the time.

And its a big place. There’s a Chamber of Commerce sign in downtown Midlothian proclaiming the town the “Cement Capitol of Texas.” There are three large cement plants – TXI, Ash Grove and Holcim – that quarry the limestone rock they need from the escarpment that runs north-south along I-35 for most of the length of the state. But the sign is too modest. Befitting one of the fastest growing areas in the country, it’s the largest concentration of cement manufacturing in the nation. 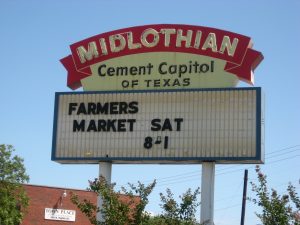 That pollution goes somewhere. Depending on where you live, some of it lands in your lungs. 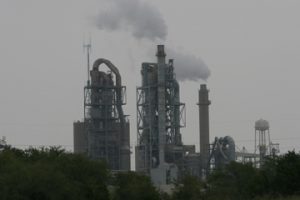 All three cement plants are in Midlothian to mine the limestone rock just like coal plants would strip-mine coal. Midlothian has a lot of cement kilns because that’s where the raw material for cement is, not because of any other reason.

But unlike coal, the limestone isn’t flammable and for there to be cement, the kilns must reach and maintain a flame of at least 1700 degrees F to bake the limestone with other ingredients. This is the way cement has been made since Rome perfected the process two millennia ago. You bake rock…just so.

And that flame is your number one operating expense as a cement plant owner. It accounts for up to 40% the costs of doing business. Anything you can do to reduce the costs of that flame saves you money. And that equation is the basis of constant mischief in the industry. 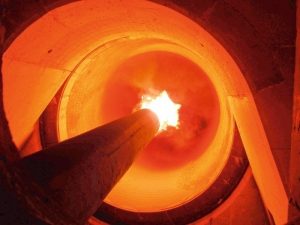 The lance of the flame inside a cement kiln, or furnace

But another trend started in the 1980’s. Two of the three cement plants took advantage of a loophole in a new federal law and began burning hazardous wastes to bake their limestone rock.

Unlike gas and coal, the cement plants were paid by hazardous waste generators and middlemen to burn these wastes, so the plants not only saved the cost of buying fuel, they actually profited from becoming incinerators, and labeling waste as “fuel.” Hazardous waste burning at U.S. cement plants peaked in the 1990’s. 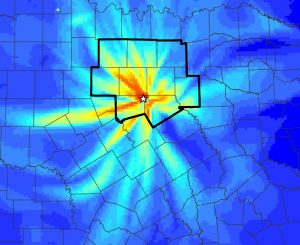 Even after many cement plants have stopped burning hazardous wastes, they continue to burn “industrial wastes” like used oil, tires and shredded car interiors. When burned in kilns, these waste often produce exactly the same toxic air pollution as hazardous wastes. That’s what’s happening in Midlothian now. Although decades of citizen action have modernized the equipment and stopped the burning of official hazardous waste, the three cement plants continue to burn a wide variety of materials, and the pollution continues to blow wherever the wind takes it.

And that’s the reason why DFW is always just one multinational decision away from being downwind of a huge hazardous waste incinerator again, or a municipal waste incinerator, or a medical waste incinerator: Because we’re already downwind of the three hungry cement plants that need to burn any and everything they can get their hands on, the cheaper the better. And if they can get paid to throw things in the fire, well that’s a business formula they can get behind.  As long as they need to feed their flames, they’re out combing the streets for things to burn – including “hard to burn plastics” for an industry that needs its own greenwashing cover story.

Until the manufacturing of cement no longer demands a sun-hot flame, or they run out of limestone rock, the Midlothian cement plants pose pose a huge on-going air pollution threat. The Dow project to burn plastics is just the latest, but not last, chapter. That’s why as long as there’s cement being made here, there also needs to be vigilant downwinders.