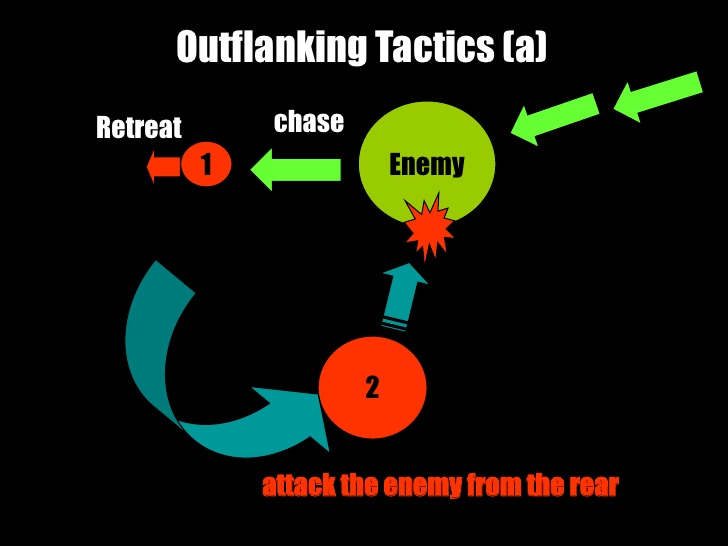 Last week, the EPA made an important admission.

"Methane emissions from the oil and gas industry are significantly higher than previous official estimates, according to draft revisions of the U.S. greenhouse gas emissions inventory released Monday by the Environmental Protection Agency. At 9.3 million metric tons, revised estimates of 2013 emissions are 27% percent higher than the previous tally. Over a 20-year timeframe, those emissions have the same climate impact as over 200 coal-fired power plants."

This most recent analysis jives with other studies like the one from UTA/EDF that found Barnett Shale facilities leaking up to 50% more methane than previously estimated. In reaction to the information, EPA Chief Administrator Gina McCarthy was quoted as saying "we need to do more" to cut methane pollution.

In its last year in office the Obama administration is finally grasping that natural gas isn't the climate change wunderkind its promoters claimed and last week's announcement is the tacit admission they need to do more to crack down on oil and gas.

By Spring, the Regional office of the EPA is expected to announce that it has rejected the State's clean air plan for DFW in regard to its application of "Reasonably Available Control Technology." That means the state hasn't required the application of readily-available air pollution controls for major sources the way the Clean Air Act demands. Specifically, EPA staff have cited the failure of the state to lower the emission standards for the Midlothian cement kilns to reflect more modern technology. But it's not the only area where Texas fell short. There are no new pollution requirements for any oil and gas facilities in the state's plan either.

EPA rejection of the Technology section of the state's DFW air plan would mean the EPA would begin to draft its own clean air plan for the region. An EPA-drafted plan gives local citizens concerned about the health impacts of fracking an opportunity to persuade the Agency to use the plan to crack down on smog-forming Nitrogen Oxide (NOx) and Volatile Organic Compounds (VOCs) pollution in the Barnett Shale by requiring lower emission standards on all aspects of drilling and production.

In light of last week's announcement, this gives EPA an extra incentive to go after VOC emissions in DFW even though the conventional wisdom is that it's combustion-generated Nitrogen Oxide pollution that really makes DFW smog so bad.

BTW, that conventional wisdom is under attack because the worst-performing air monitoring sites in North Texas are all in the Barnett Shale and heavily influenced by pollution from oil and gas facilities – both NOX and VOCs. It's possible to imagine a strategy to get smog numbers down in DFW solely by application of oil and gas emission regulations that can impact these important monitors – which drive the entire region's fate –  even if the new regs have minimal impact on monitors elsewhere.

What kind of new regulations are we talking about?

* Start with the electrification of all 650 large natural gas compressors in the 10-county area.

* Do the same thing for all drilling rigs in the same 10-county area – nothing but electric.

* Emission standards for tanks and pipelines that reflect the latest leak-detection technology.

Inclusion of new EPA “Control Technique Guidelines" which are part of Agency's new methane rules. According to the Agency's release on the the new rules, “…reduction of VOC emissions will be very beneficial in areas where ozone levels approach or exceed the National Ambient Air Quality Standards for ozone."

Under the new rules, areas like DFW that host large concentrations of gas pollution sources and are officially categorized as “non-attainment” for smog receive "an analysis of the available, cost-effective technologies for controlling VOC emissions from covered oil and gas sources." 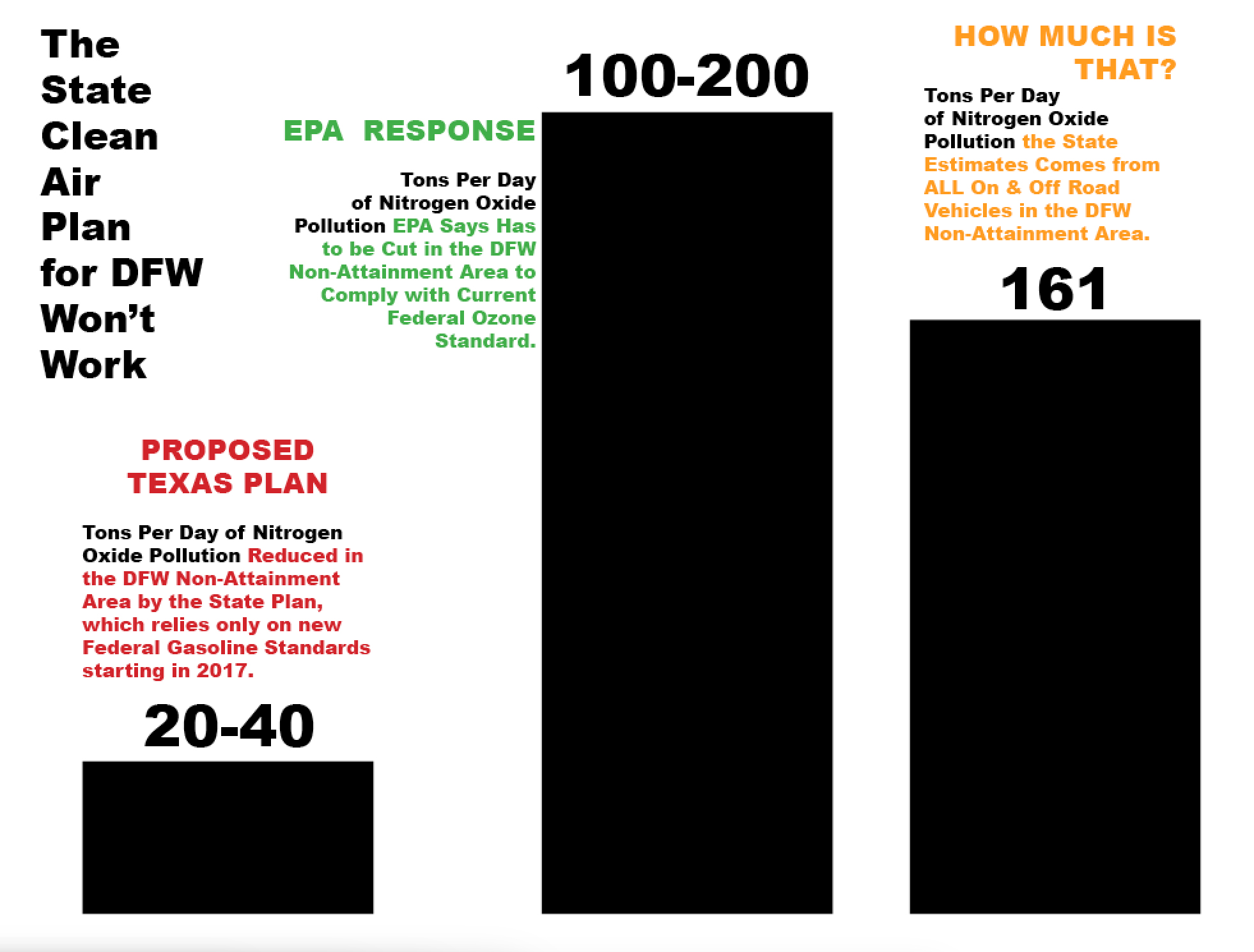 There's one more reason EPA has an incentive to go looking for all the cuts in oil and gas pollution it can find in the 10-county DFW non-attainment area: after the cement kilns, there's no other major sources the Agency can target locally.

Because while it has the authority in a federal clean air plan to regulate all pollution sources in that 10-county DFW non-Attainment area, the EPA can't write new emission standards for the East Texas coal plants located 100 miles outside of that 10-county area – even though those coal plants have more of an impact on North Texas smog than any other source of pollution. EPA (and us) can put pressure on the state to address these dinosaurs, but it can't touch them through a DFW air plan.

EPA staff has estimated it will take a cut of 100-200 TONS PER DAY in local smog-forming Nitrogen Oxide pollution for DFW reach the current 75 parts per billion smog standard.  The State's "plan" – i.e. the federal gasoline fuel changes it relies on –  only represents a 20-40 tons per day cut.

To give you some idea of the size of that gap, the state estimates that all on and off road vehicles in the 10-county area will emit 161 tons per day of NOx in 2018.

State-of-the-art controls on all the cement plants might give you up to 15 tons a day. Electrification of the large compressors, another 15-16 tons per day eventually. After that it gets hard to find large volumes of cuts without the coal plants. And this is why the EPA should give cuts in VOC/methane a longer look than they have before  – they're concentrated in the same areas where the region's worst-performing monitors are and they represent a huge source of climate change pollution that could also be another skin on the wall in addition to lowering smog levels.

There's no question the passage of HB40 has stymied grassroots progress toward more protective regulation of fracking by municipal governments in the Barnett Shale. It's thrown what was a fairly successful local movement into disarray. To date, there doesn't appear to be any consensus about strategies to combat the effects of the legislation.

But a way to outflank some of the impacts of HB 40 coming is coming down the pike, and it offers local fracktivists an opportunity to rally round a common, achievable goal – lowering emission levels across the board in the Barnett Shale. We can overlay a larger, stricter regional template for oil and gas regulation in place of 100 separate municipal ones.

What better way to nullify the efforts of the nullifiers in Austin?