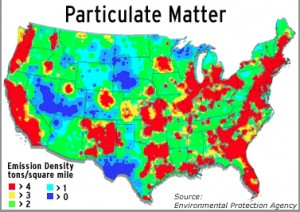 It was just two months ago we featured the results of a study out of Boston that linked exposure to Particulate Matter, or PM pollution to brain aging and increased risk of dementia. Before that, we highlighted studies linking PM to autism and Parkinson-like symptoms. Now comes one more long-term, peer-reviewed report that connects ambient levels of the pollution to accelerated brain aging.

This one is from the University of Southern California and looked at over 1,400 women without dementia who were initially enrolled in a large health study from 1996 to 1998. Researchers measured their brain volume with M.R.I. scans in 2005 and 2006, when the women were 71 to 89 years old.

Using residential histories and air pollution monitoring data, they estimated their exposure to PM air pollution from 1999 to 2006. For each increase of 3.49 micrograms per cubic centimeter (μg/m3) cumulative exposure to PM, there was an associated 6.23 cubic centimeter reduction in the subject's brain white matter, the equivalent of one to two years of brain aging. The current EPA standard for 24 PM exposure is 35 μg/m3, while the annual average standard is 12 μg/m3, although many leading scientists now believe there's no "safe" level of exposure to PM pollution. That is, any amount of exposure is capable of doing some damage.

The association between pollution exposure and brain aging in the USC study remained after adjusting for many variables, including age, smoking, physical activity, blood pressure, body mass index, education and income.

“This tells us that the damage air pollution can impart goes beyond the circulatory system,” said the lead author, Dr. Jiu-Chiuan Chen, an associate professor of preventive medicine at the Keck School of Medicine at the University of Southern California. “Particles in the ambient air are an environmental neurotoxin to the aging brain.”

It's important to note that all of these women were subject to ambient levels of PM pollution, that is, levels that we're all being exposed to on a daily basis living in the modern world. Everyday kinds of exposure to this substance is making our brains age prematurely.

What makes PM pollution dangerous to human health is the fact that its soot particles are so tiny that they can actually cross from the lungs into the blood stream and travel anywhere in the body, including the brain. Soot is a toxic substance on its own, but when its carrying the residues of whatever was burned to produce it – benzene in a combustion engine, mercury from the coal in a power plant, dioxins from "hard to recycle plastic waste" in a cement kiln – it becomes even more dangerous.

While PM pollution remains an important factor in respiratory diseases, heart attacks and strokes, the more insidious effects to the brain it causes are raising its profile among policymakers and activists. They have implications for zoning highways near schools, parks, and residences, as well as pollution control measures at industrial facilities.

PM is one of the best examples of "the closer we look, the more trouble we find" phenomena in environmental health science. Advances in technology and medicine show that subtle changes in exposure to chemicals that went unnoticed before can have profound consequences to our species.