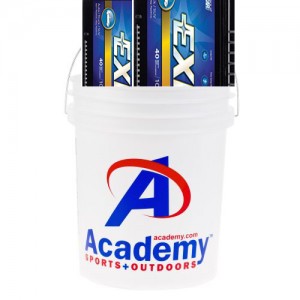 It's 2014. Distant parts of the globe are connected within micro seconds. Some of us are driving electric cars. Our phones are more powerful than all the computers it ever took to put a human being on the Moon, combined.

And we use five gallon buckets from Academy to collect and store industrial hazardous waste.

Or at least the Exide contractors that are in charge of "cleaning-up" Frisco's Stewart Creek do. And they not only use them, they lose them.

On May 8th, workers for Apex-Titan Inc. were collecting battery casing chips and bits of lead slag from fields near the Creek a the intersection of Legacy and Stonebrook and putting them into the bucket. For decades before it closed in 2012, the Exide lead smelter dumped waste into and around the Creek, leaving a still-contaminated trail from the plant site all the way to Lake Lewisiville, approximately five miles away.

After collecting a full load of Exide waste, the contractors placed the bucket in the back of a pick-up truck and drove off – apparently without securing the tailgate first. Despite two staff from the Texas Commission on Environmental Quality on the scene to "document field activities"  and the City of Frisco's own contractor present – nine people in all – no one noticed when or how the bucket fell off the truck on he way back to the plant site.

When they discovered the loss, the workers retraced their route. They searched the parking lot of a city park located across the street from a school – one of two in the immediate vicinity. No bucket. More than two weeks later the bucket of hazardous waste is still missing. But we're only now finding out about it.

This would be funny if it weren't for the possibility of this bucket ending up with kids or in a garden or as a water container.  As a memo from the City of Frisco puts it:

"We believe it is a reasonable assumption that the bucket was found in the street by a person who picked it up for their own use; without realizing the contents might be hazardous waste."

With that in mind, did the City of Frisco inform the Frisco School District? Did any warnings get issued to students and parents at the two near-by schools? Not as far as we know. Did the City put out an All Points Bulletin for the bucket? No it did not. Embarrassment often keeps officials from doing the right thing about public health. So there's hazardous lead waste out there in a Frisco neighborhood that could be diminishing kids' IQs even as you're reading this, even as officials are too embarrassed to ring the alarm.

Now maybe you're thinking this whole Frisco lead cleanup fiasco now has a new mascot. And you' be right. This bucket pretty much sums up the FUBAR'd state of things. A bankrupt company entrusted to clean-up its own mess. A city council seemingly intent on making sure it ends up with a Superfund Site in the middle of the "second-fastest growing city in America." A state and federal government asleep at the wheel. It's all nicely summed up by that lost five gallon Academy bucket. That's the image. Here's the caption, however, thanks to Jack Fink at Channel 11:

"Mack Borchardt of the city of Frisco said he’s surprised, since they were assured going into this process by Exide that there wouldn’t be any problems with the system in place. “Obviously, that didn’t turn out to be the case,” said Borchardt."

City officials were shocked! Shocked they tell you, that Exide screwed up.

Frisco City officials handed the job over to Exide and expected the same company that ran an outlaw smelter operation to provide an excellent clean-up of their own mess. They had faith! The City is handing over the toxicology and assessment to the state and EPA. They have faith! They're handing the decision about what to do with the waste in Frisco to their lawyers, who are recommending the city host a toxic waste landfill by Stewart Creek in front of the new Grand Park. They have faith! What they don't have is any faith in their own citizenry. After 2 years there's still no transparent, civic dialog on the fate of the thousands of tons of lead waste that remains in the heart of the central business district.

There's no question that given a choice, most Frisco residents would vote to haul the waste completely out of town to a hazardous waste disposal site and develop the property as any other prime piece of real estate. And yet the Frisco City Council is still on course to approve a permanent toxic landfill of its own…… that would be monitored by the same state agency that didn't see that five gallon bucket falling out of the contractor's truck.

What's needed now more than anything else is homegrown vision and leadership. The city needs to take its fate into its own hands instead of entrusting others to look out for its self-interests. There's millions of dollars in state-collected battery fees that are supposed to be going to communities impacted by lead smelting. Frisco certainly qualifies. Instead of arguing with its own residents over a permanent landfill, the Council should be proposing legislation for the next session in Austin to finance a full clean-up.

This incident is a five-gallon splash in the face. Following instead of leading can only result in many future "problems with the system."