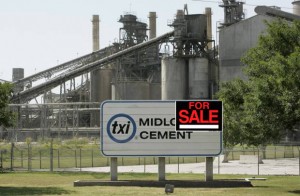 According to the Dallas Morning News, TXI Cement is up for sale with at least two possible buyers, Vulcan and Holcim, mentioned in last Friday's story. Along with kilns in California, the company's Midlothian and Hunter, Texas cement plants are on the block as part of the deal.

As the news reports note, the timing is a little strange in that the construction industry, the barometer for all things cement, is only now rebounding out of its Great Recession doldrums, and TXI's profits are nowhere near it's pre-collapse heights. It could be that the latest generation of the Rogers' family to run the firm isn't all that interested in keeping it running, or that the two largest and restless corporate shareholders, who now own 51% of the company, are anxious to deal.

Of the two suitors listed in the News article, Holcim is one of the industry's international giants that has the large cash reserves, while Vulcan is smaller, US-based, and considered more of an Aggregates business with some cement plants in Florida.

On the other hand, Holcim already operates a huge cement plant across the street from TXI in Midlothian. It's hard to imagine the company needing to double its manufacturing capacity in DFW. But perhaps TXI's California market share makes the deal look attractive as a whole and the Midlothian plant would be spun off to a third party. For Vulcan, it looks like a way to go from a regional powerhouse to a national one by buying plants in two large, influential state economies.

Holcim is a leader in the new waste-burning revival within the cement industry. Its Midlothian cement plant already has a permit to burn a long list of industrial wastes, although it's not as long as TXI's. During the economic downturn,TXI was given permission by Rick Perry's TCEQ (without public notice or participation) to burn a variety of new wastes like car "fluff" and plastics , but reportedly didn't have the capital to build the infrastructure needed to convey the wastes to the kilns. A new owner like Holcim might have the cash to fix that, and fixing that would mean lots more waste-burning.  Buying TXI's Midlothian plant would mean buying its waste-burning permits as well, opening up new waste markets for Holcim without having to go to the trouble of a permitting process.

If Vulcan or some other middle-size player buys TXI, you can be sure they'll run the plants 24/7 as much as possible to recoup their investment and take advantage of better economic times. More production equals more air pollution, even with more modern controls forced by recent clean air plans and citizen campaigns.

But it's also possible to imagine a scenario where Holcim buys TXI, uses it's Midlothian limestone quarry to add to its own local reserves, but doesn't necessarily have the incentive to run both cement plants into the ground to justify the purchase price.

A sale of TXI by the Dallas-based Rogers family would be milestone in the industry, and in North Texas. TXI opened its first cement kiln in Midlothian in 1960. You can still see it there on Hwy 67, along with three other, older "wet" kilns that operated for 48 years before being shut down in 2008. They're all scheduled to be demolished later this year, leaving only the circa-2000 TXI Kiln #5 as a landmark. The times, they are a changin'. Stay tuned.