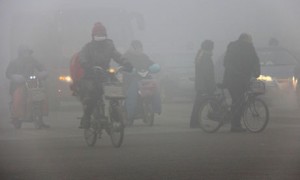 We're a bit behind the curve in reporting on this, but scientists at the University of North Carolina just published a study in "Environmetnal Research Letters"  that estimates Particulate Matter and Ozone pollution in the air is responsible for approximately 2.2 million deaths worldwide every year.

Long-timers already know about how insidious Particulate Matter can be, but this only chronicles the hardcore fatal respiratory and cardiovascular impacts, concluding the tiny particles of soot cause at least 2.1 million deaths every year while ozone pollution shortens another 500,000 lives.

"East Asia," aka China, accounts for fully have of both those figures. India for another third. In North America, the casualties include 43,000 premature deaths from PM pollution and 33,000 from ozone.

Jason West, co-author of the study said: "Outdoor air pollution is an important problem and among the most important environmental risk factors for health."

Although alarming, these numbers are all underestimates of the health impacts of both of these pollutants, since they exclude anything other than fatalities. Besides making it harder to breathe, PM pollution has been linked to brain disorders and immune system disruptions.