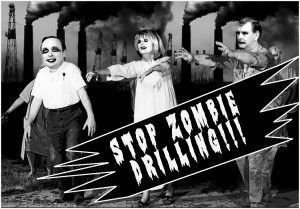 They just won't take a big fat public "No!", or two, or three, for an answer.

We've learned form sources inside City Hall that Trinity East – with a big assist from City of Dallas staff and Mayor Mike Rawlings – is preparing to once again attempt to permit its three proposed drilling and refinery/compressor station sites along the Trinity River.

While the company and city staff keep trying to win support for a weaker new gas drilling ordinance than citizens have repeatedly requested, a deal is being wheeled that would have Trinity East trading its lease on park land for another piece of city-owned property in northeast Dallas. Meanwhile, the City is also working feverishly to firm up support for its official position that it can't possibly turn down Trinity East without losing a lawsuit  – an opinion no one outside of City Hall, save Trinity East,  shares so far.

Yeah, the secret gas deal that the Observer uncovered in February got City Manger Mary Suhm to finally leave the building come December, but she's not going until she gets those Trinity East sites permitted the way she promised behind closed doors.

All of which makes the writing of a brand new Dallas gas drilling ordinance even more important now. And last week the City Plan Commission released its two-month schedule of how that's going to be done (see below), complete with three (daytime) public hearings with an ETA to the City Council by October.

There will be just six more meetings of the Plan Commission to review the almost two-year old Dallas Gas Drilling Task Force recommendations and decide to take them at face value, strengthen them, or weaken them. Scatted among these will be three public hearings – the first one in a little over two weeks on August 15th from 4 to 6 pm. The Commission goal is to get a new drilling ordinance to the City Council by October, when the terms of current members expire.

That's the official agenda. The unofficial one is trying to find ways to weaken the new ordinance enough to allow Trinity East to be able to get their proposed sites permitted. There's already been plenty of evidence at previous meetings indicating how desperate staff is in trying to give their departing boss a going-away gift.

We know most of you can't come to the Plan Commission workshops on Thursday mornings to follow the nitty-gritty of how this plays out. We'll be there reporting that to you, no problem.  But what we can't do is manufacture warm bodies to put in seats for those three public hearings.  Please make it a point to show up at one or more of these – and in particular, the very last one on September 26th as it rolls into the City Council.

Trinity East lobbyist Dallas Cothrum is on record as saying the company's three previously proposed sites on parkland, flood plains and near a new soccer complex that have now been rejected twice by this same CPC were the "best possible" places the company could have chosen for drilling and processing. So now the battle is over the less-than-best possible places. We can't wait to see what part of town the City and Trinity will decide to sacrifice for that designation as part of their possible land-swap deal.

Making sure a new drilling ordinance is the most protective it can possibly be is the only way left to finally drive a stake through the heart of the Trinity East gas permits. You have no idea how much we hate to ring the alarm about these damn permits again, but the stakes are very high and we're on the verge of winning one of the Barnett Shale's biggest citizen victories  – if we can just keep the pedal to the metal. Bring your lead feet to the first hearing on August 15th.

(All workshop meetings start at 9 am and take place on the 5th floor at 5ES in City Hall unless otherwise indicated. Specific Room locations for the Public Hearings at City Hall will be announced.  Topic #’s refer to the Dallas Gas Drilling Task Force Recommendations Matrix.)

(Agenda: What to recommend to City Council)