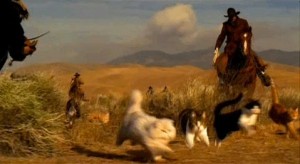 Rebuking city attorneys, the Dallas City Plan Commission agreed on Thursday to require 1500 foot setbacks, or buffer zones from gas wells to "protected uses" such as homes, businesses, hospitals, schools, recreation areas, and parks.  A waiver to get as close as 1000 feet would have to come with a three-fourths vote by the City Council. No well could be closer than 1000 feet.

City staff was pushing hard to retain the 2012 gas task force recommendations of 1000 feet, with a waiver to as close as 500 feet, something even the Dallas Morning News said was unacceptable. Those less-protective distances are seen as a way to get the twice-rejected Trinity East permits approved under a new ordinance.

Plan commission members also agreed to include more kinds of businesses in the protected use category, such as laundry services and vehicle pool operations, somewhat erasing the blue collar/white collar double-standard of protection sanctioned by the task force.

Left pending, and full of skullduggery potential for city attorneys, is where to begin and end that 1500 feet. Most citizens would probably go from property line to property line to ensure the entire protection of the "protected use." But city attorneys want to begin at the well bore hole itself and go to the "structure" of the protected use – not your front yard, but your front door; not the soccer field itself, but the recreation center next to it. This will be the next big battle over how to define these setbacks.

Also left pending were what, if any, exceptions for park drilling there should be in the new ordinance. Even more important to the Trinity East permits than the residential setback requirement is the current prohibition on drilling in parks. Here, city staff also was lobbying very, very hard to retain the special loophole for the Trinity East permits the task force abruptly voted to make at their very last meeting and without any public comment. Preservation of this loophole – you can drill on "unused" park land despite there being no legal definition supporting that term – means that Trinity East would have a fighting chance to come back and re-file.

Although seemingly rejecting the task force recommendations,  Plan Commission members still expressed desire to carve out some kinds of exceptions for park land that was perhaps not publicly or readily accessible, but had trouble articulating the definition of "unused."  Under the law, park land is park land; there is no A to F park grading system. That's why the easiest and most protetive thing to do is ban drilling from parks all together.

The devil will be in the details, but in the first real test vote for a more protective gas drilling ordinance, citizens won. And it drove city attorney Tammy Palomino crazy. As Plan Commission members got more and more independent over the course of the two-hour briefing, you expected her to start reaching for the cattle prod. After calling for a reconsideration not once, not twice, but three times after she got beat bad on the vote for the 15000 ft setback she announced that staff would return at the next meeting with a "presentation" on the 1500 foot setback. No doubt it will focus entirely on why it's a bad idea for all kinds of reasons other than it'll make it harder for Trinity East to get their permits.

Make no mistake, the City Manager's office, through staff like Palomino, is still fighting on behalf of those Trinity East permits, and the permits she expects to come after those. She's trying to minimize the number of protected uses and the spaces between them and your house, school or playground.

If you want to fight back but can't show up in person to tell the Commission what you think, please consider sending a qucik click N send e-mail message to the members via our "Featured Action of the Week."

The Plan Commission will be getting briefings from staff on different parts of the new ordinance every two weeks throughout the summer (July 11 and 25 August 8 and 22) with at least one or two public hearings on the finished product after that. All meetings begin at 9 am and are conducted at Room 5ES on the fifth floor of Dallas City Hall downtown. The next meeting is supposed to focus on the operations of a well site, i.e. hours of operation, noise, dust, plus the all-important landscaping requirements. Stay tuned.