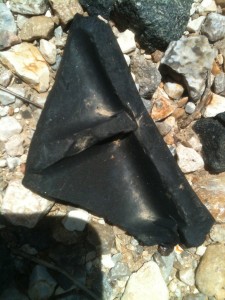 (FRISCO)—Three new documents, including two reports paid for by the City of Frisco but never publicly released, confirm that the former Exide lead smelter is the source of battery chips and slag waste that line Stewart Creek from Frisco to Lake Lewisville, and concludes the smelter site remains a continuing source of contamination.

Samples taken in 2011 by a City of Frisco contractor found that 71% of Creek sediment collected had elevated levels of lead, cadmium or arsenic. A “visual survey” done for the City of smelter waste just three months ago found at least 45 “hot spots” of battery chips or slag along the entire five-mile route of the Creek, from the western edge of the smelter site all the way to its mouth at Lake Lewisville. Last year a state environmental inspector warned in an e-mail that she was concerned about the smelter’s battery chips making their way “into Stewart Creek and flowing to Grand Park where a parent who is also a Frisco resident pulls one out of their child’s mouth.”

Local group Frisco Unleaded received the documents last week as part of an Open Records Act Request to the Texas Commission for Environmental Quality. Members say the contents prove the public is right to be concerned about the impact of the smelter site on the City’s ambitious new Grand Park development. “These reports show why any activity downstream of the smelter, including the enjoyment of the new Grand Park, will be impossible without a comprehensive clean-up of the entire Exide site. This problem isn't just going to go away or fix itself," stated Meghan Green.

Green also called for the EPA to step in and take over a clean up that until now, has been directed by the state and city. "It’s clear that the toxins at the smelter are being washed into Stewart Creek with each rainfall and are surfacing and will continue to surface along the whole length of the Creek, which happens to also be a tributary into Lake Lewisville. To add insult to injury, Lake Lewisville is a source of drinking water for Dallas. To say that I'm concerned is an understatement. It’s time for the EPA to get more aggressive about protecting public health from this site.”

Although the smelter ceased operation in 2012 and demolition has taken place to remove most of the structures from the central Frisco site, the land itself is the burial ground for tons of lead waste in the form of pieces of used lead-acid batteries broken up for their contents and the slag waste produced from the smelting process. Frisco has arranged to buy an outer ring of the smelter property, but the core part of the operation remains in the hands of Exide, now going through bankruptcy. It’s that core, as well as the property Frisco is buying, that’s the source of the battery chips and slag migrating to Stewart Creek, which runs right though the middle of the Exide site.

That continuing threat to Stewart Creek, along with an assessment of historical contamination, is extensively chronicled in the City and State documents released by Frisco Unleaded today. They include:

1. A November 2011 “Limited Site Investigation” Of Stewart Creek by the City of Frisco

The City of Frisco specifically requested this investigation “to evaluate chemicals of concern in sediment in the vicinity of the Grand Park project.” Samples of sediment were collected at a total of 30 sites, and tested for Lead, Arsenic, Cadmium, Selenium, and Sulfates. 71% of the sediment samples tested for Lead, Cadmium and Arsenic exceeded the Texas Commission on Environmental Quality Ecological Benchmark.

A year and a half after the Creek sediment sampling, contractors for the City of Frisco performed “a walking survey to identify and document the potential presence of visible battery chips and slag in Stewart Creek."

At least 29 hot spots of battery chips and/or slag were found within the boundaries of Grand Park, from Stonebrook Parkway on the south to the North Dallas Tollway, more than 4 times the number of any other segment along the survey. “Frequent occurrences of concentrated battery chips and potential slag material were observed in the Stewart Creek channel in Grand Park from Stonebrook Parkway to the Dallas North Tollway bridge.”

A Smelter Runs Thru It-Summary

In June of last year a TCEQ inspector wrote her supervisors that new concentrations of battery chips had shown up in previously clean-up areas of the smelter site. “These battery chips were believed to have washed up this year and accumulated down gradient along the tree line. Some of these chips were observed making their way down towards Stewart Creek. It looks like they’re being carried toward the trees and the creek with the rainwater. (Exide and City representatives) stated that the area was tested (prior to this new accumulation of battery chips) and it was below 250 ppm. I pointed out that there also wasn’t as many battery chips in those areas when the APAR was submitted. In the report, it states that the area would be covered with the geomembrane fabric and it sounded like this is what they want to do with these new battery chips as well (cover them with fabric). I pointed out that if I were to collect a sample that it would most likely exceed 250 ppm and there were just too many that had accumulated to be covered up with the fabric. As we all know, these chips move under rainy conditions. I told (the City representative) that our concern and I’m sure the city’s concern as well is if these battery chips made it into Stewart Creek and flowed to Grand Park where a parent who is also a Frisco resident pulls one out of their child’s mouth.”

One of her supervisors responds that chips will always come up with a rain: “Based on my experience from working on site contaminated with battery chips and slag, rubber battery chips that are buried will float to the surface (just tires in landfills). While working on sites associated with the West Dallas RSR lead smelter, with the exception of where chips were used as road based, every site that had surface chips on the surface were located over areas where slag and battery chips have been deposited in the past. Were subsurface investigations conducted in the areas of concern to determine the extent of contamination? Or did they only conduct surface investigations.”

Critics of the City’s approach to the smelter site clean-up cited the e-mail as a stunning example of Frisco’s caviler attitude about the contamination problem posed by the Creek. “We’ve often said the City is trying to figuratively cover-up the problem of Stewart Creek, but here’s an example of where they’re doing it literally,” said Jim Schermbeck of Downwinders at Risk, the regional clean air group assisting Frisco Unleaded.

Along with the City and State documents, Frisco Unleaded released the results of its own small sampling of battery chips members collected only last week from the public Right-of-Way on the BNSF railroad tracks leading into the smelter site.  One of the chips had over 100 ppm of lead on it and 8.5 ppm of Arsenic. The Lead level is above the TCEQ Ecological Benchmark and the Arsenic level is just below it. Schermbeck said it was easy to collect the chips because they’re lying on the open ground.

Besides demanding that the EPA issue a “Imminent and Substantial Endangerment” order to begin addressing the Creek’s clean up, Frisco Unleaded and Downwinders called for the City of Frisco to release all of its Exide-related documents to the public and for the City of Dallas to begin interceding on behalf of its residents, whose drinking water is under threat from the smelter waste.

Green said that despite the City’s rhetorical promise to its residents to be transparent with them about the site, “that obviously hasn’t been the case since we had to get these city documents from the state. We deserve all the information the City Manager and Mayor have about this site. It’s our families, it’s our town, and it’s our tax money. The Mayor and Council need to make a commitment to residents that they’ll share everything they have about the site with the public. ”

Addressing the issue that could pull in Dallas and other cities, Schermbeck noted, “There’s now clear evidence that the Exide smelter has been a constant source of toxic contamination in Lake Lewisville for decades. The City of Dallas needs to wake-up and begin to lobby for the kind of environmental clean up that can put a stop to that contamination to its water supply.”

According to Schermbeck, it’s the new-found evidence of a continuing threat to the Creek and Lake that make this more than just another effort to clean up a past environmental mess, and warrants a serious escalation of regulatory responses.  He noted that most toxicologists agree that there is no safe level of exposure to lead, especially for children, whose minds and bodies are still developing. “And yet, here’s this property on Creek’s edge, that’s proven to be a fountain of constant lead contamination flowing downstream through the middle of densely populated neighborhoods, and ending up in a source of municipal drinking water. It’s a clear and present danger to public health that deserves an immediate and potent remedy.”

If you want to let Mayor Maso and the Frisco City Council know how you feel about their sitting on this inforamtion for almost two years, please send a qucik "Click N Send" e-mail to them via our "Featured Citizen Action of the Week." Thanks.