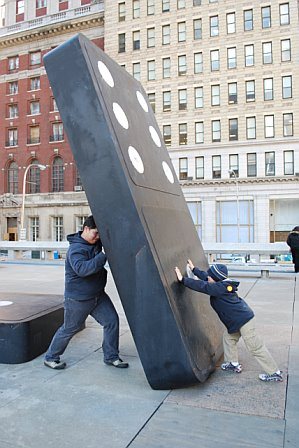 When the Dallas Plan Commission held its January 10th vote to "reconsider" the denial of gas permits to Trinity East, it didn't allow any public testimony at all about the dangers posed by these proposed drilling and production sites.

Tomorrow it will. And we need you to come and add your body and your voice to this fight.

When the Mayor and City Manager first cooked up this scheme to ram through the last three gas permits in Dallas, they didn't expect to have any roadblocks. They scheduled a meeting five days before Christmas and thought they had it locked up.

They were wrong. You showed up anyway and the Plan Commission voted to deny the permits based on your impassioned pleas for public health and safety.

When City Hall didn't like the results of that vote, and pulled the "reconsideration" stunt in January, 100 of you showed up on a work day to shame the CPC publicly in a meeting that received a huge amount of media coverage.

Now they're holding the second public hearing on these gas permits. We need a larger show of strength to demonstrate we're gaining momentum

We need you to personally come and tell the Plan Commission why it's a bad idea to allow drilling in floodplains and parks and build a refinery next to the city's largest soccer complex where thousands of kids will be playing every weekend.

We know it's getting tiresome, but when you show up at these meetings and hearings, you're helping us win this fight.

Slowly, but surely, your concerns and questions about these Trinity East permits are weighing them down and making it harder for them to get rammed through.

For example, because of your work, we're about to see a bi-partisan call for the Mayor to reject the refinery permit near the Elm Fork Soccer complex. That news will be announced at tomorrow's press conference starting at 1:00 pm.

There's also more in the works challenging the process the City is using to keep these "zombie" permits alive.

The tide is turning. But you have to keep showing up.

Nothing can take the place of a room full of angry citizens. Tomorrow, don't just watch history on TV or read about it the next day. Make history.  Thanks.