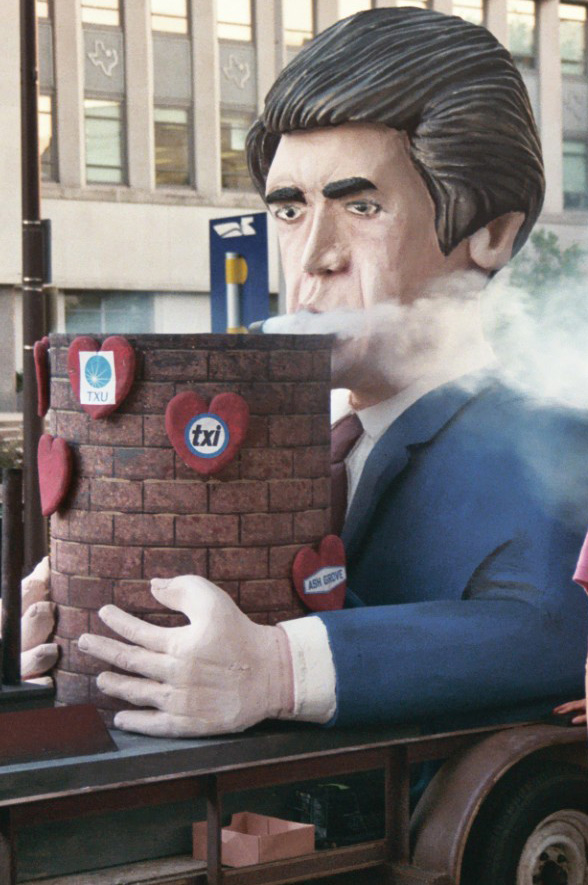 In 2006, Governor Perry announced that he was going to fast track over a dozen new coal plant permits in East and Central Texas. There was an instant hue and cry. Not only citizens but cities protested. Believe it or not, the same Dallas City Hall now prostituting itself for gas refineries was actually out organizing a multi-municipality alliance with Houston against the coal plants and Perry.  Downwinders launched its now infamous "Smokestack Love" cross-state tour, complete with a 16-foot long parade-quality float with a smokestack-inhaling Perry.

Unfortunately, opponents weren't able to stop all the plants. A leftover 1980's permit for the Oak Grove lignite plant north of College Station did get approved over the objections of local landowners. But most were derailed by fierce resistance or lower natural gas prices brought on by the heavy exploitation of the Barnett and Eagle Ford Shale plays.

Last Thursday, the final domino of that proposed 2006 wave of new coal plants fell with the announcement that the White Stallion plant near Bay City was being canceled.

"The news marks a victory for opponents of coal in Texas, notably the Environmental Defense Fund and the Sierra Club, who have worked for years to oppose the White Stallion and other coal power projects in the state. At this point, there are no longer any major new traditional coal power plants planned in Texas. All of the new projects are primarily natural gas and wind power, with some solar."

Congratulations to all those who worked so hard to see these bad ideas finished off for good. But remember there are still older coal plants in East and Central Texas that are among the largest point sources of pollution in the state, and the nation. Having now eliminated new potential clean air threats from the last of the  Perry-proposed coal rush, the Sierra Club is turning its attention to the existing plants that are long past their prime and need to be replaced with cleaner sources of energy.