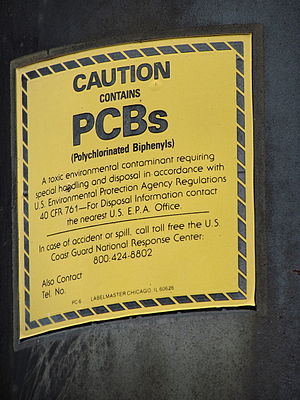 Another argument for the implementation of the Precautionary Principle.
PCBs (polychlorinated biphenyls) are chemicals that were used as coolants and lubricants in electrical equipment for 50 years. They were banned in the US in 1979 because of their severe toxicity. Although they're no longer manufactured, PCBs are still present in older products, such as caulking, oil-based paint, floor finish, older automobile electrical systems, and insulation.
PCBs persist for years in the environment — in soil, water and the food chain — as well as in body fat and breast milk. PCBs are endocrine disruptors, that is, they can alter a person's hormone system at even small levels of exposures.
And now we know that over 30 years after they stopped being manufactured, PCB's are making it harder for couples to have children, including in 12 counties in Texas.
That's the conclusion of a new extensive $10 million National Institue of Health study that's the largest of its kind ever done.
Researchers enrolled 501 couples from four counties in Michigan, and 12 counties in Texas, from 2005 to 2009. The couples were part of the Longitudinal Investigation of Fertility and the Environment (LIFE) study, established to examine the relationship between fertility and exposure to environmental chemicals and lifestyle. An earlier analysis from the LIFE study found that high blood levels of lead and cadmium also were linked to pregnancy delay.
Those couples that had the highest PCB levels in their bloodstream had the most difficult time conceiving, 20% harder on average.

Exposure to these pollutants is known to have a number of effects on human health, but their effects on human fertility — and the likelihood of couples achieving pregnancy– have not been extensively studied.
"Our findings suggest that persistent organochlorine pollutants may play a role in pregnancy delay," said the study's first author, Germaine Buck Louis, Ph.D., director of the Division of Epidemiology, Statistics, and Prevention Research at the Eunice Kennedy Shriver National Institute of Child Health and Human Development (NICHD) at NIH.
Dr. Buck Louis added that individuals may limit their exposure by removing and avoiding the fat of meat and fish, and by limiting the consumption of animal products.

The study was published online in Environmental Health Perspectives and is available online at http://ehp.niehs.nih.gov/2012/11/1204996/.
Think the problem is only with leftover PCBs? Think again. PCBs are part of a category of chemicals known as persistent organochlorine pollutants (POPs) and include industrial chemicals and chemical byproducts as well as pesticides. In many cases, the compounds are present in soil, water, and in the food chain. The compounds are resistant to decay, and may persist in the environment for decades. Some, known as persistent lipophilic organochlorine pollutants, accumulate in fatty tissues. Another type, called perfluorochemicals, are used in clothing, furniture, adhesives, food packaging, heat-resistant non-stick cooking surfaces, and the insulation of electrical wire. This stuff is all around us. As are other endocrine disruptors.
And is this a good time to remind you that the Midlothian cement plants have all put in permits to burn more industrial wastes, including the shredded remains of older cars?
Posted in air toxics, car fluff, Cement, cement industry, Hazardous Waste, Incineration, Toxicology